Please ensure Javascript is enabled for purposes of website accessibility
Log In Help Join The Motley Fool
Free Article Join Over 1 Million Premium Members And Get More In-Depth Stock Guidance and Research
By Eric Volkman - Sep 25, 2015 at 6:20AM

Our lifters for this week are three very familiar names on the stock exchange.

Now this is more like it. After a few weeks where the rate of dividend raises slowed to match the sluggish pace of late summer, they seem to be picking up again.

Last week, we saw a clutch of fresh hikes, particularly from several big names on the exchange -- some of the bigger names in their respective industries, in fact. And who are they? Glad you asked...

Philip Morris International (PM -1.02%)
Smoke 'em if you got 'em. This big cigarette producer has raised its quarterly dividend by 2%, to $1.02 per share.

What else is new? Since being divested from Altria in 2008, the company has disbursed a payout in each quarter, raising it around the same time every year. 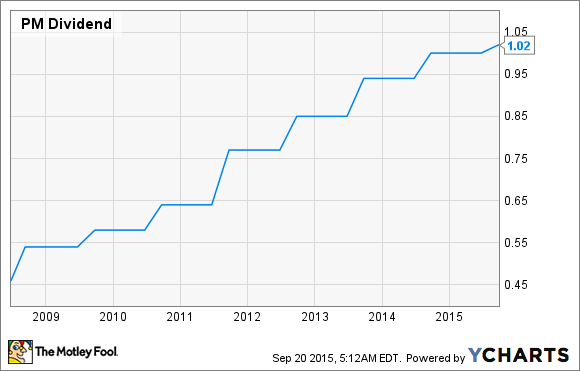 The incremental bump this time might be because the company's most recently reported quarter wasn't a blockbuster, with net revenues down by nearly 11% on a year-over-year basis (to $18.8 billion). Attributable net earnings were higher, but only by 2%, to nearly $1.9 billion.

Higher consumer health consciousness and concentrated anti-smoking efforts by lawmakers are putting the squeeze on the tobacco industry. Although Philip Morris International is not as vulnerable to these trends as Altria, as it concentrates on foreign markets, it can't entirely escape their effects.

Considering that, the company's dividend should not be considered infallible. The company is still well profitable and certainly has the dosh to keep notching the payout higher for a while, but the long-term future of the business is -- sorry, can't resist -- cloudy, in my opinion.

Philip Morris International's new dividend is to be paid on October 14 to stockholders of record as of September 30.

Microsoft (MSFT 2.76%)
Like Philip Morris, the software giant likes to raise its quarterly dividend every year at around the same time (probably not coincidentally, shortly after its fiscal year closes). Last week was 2015's turn, with Microsoft boosting the payout by 16% to $0.36 per share.

And why not? The company is habitually profitable, and despite impairment, integration, and restructuring charges that topped $10 billion during the year, it was still comfortably in the black -- to the tune of $12 billion-plus, on almost $94 billion in revenue -- for fiscal 2015. 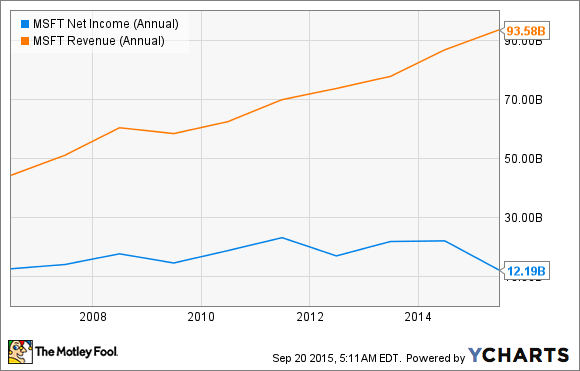 As such, Microsoft remains a cash-generating machine, pumping out anywhere from $23 billion to nearly $30 billion in free cash flow annually. That's well above what the company pays out in dividends.

It's facing challenges these days, particularly considering that it has to move away from its traditional wheelhouse of PC operating system software. But at this point, the company is so ubiquitous in every facet of technology, it almost can't help but make piles of money. I wouldn't worry at all about the viability of its payout.

Microsoft will hand out its freshly raised dividend on December 10 to shareholders of record as of November 19.

The company is probably confident because it's been well in the black lately, although both revenue and net profit in its fiscal Q1 2016 both slipped on a year-over-year basis (to $409 million and $41 million, respectively). 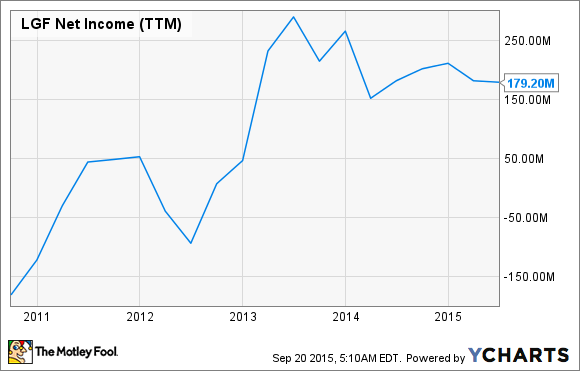 It's very likely that the proximate future will be better. Lions Gate's release slate is full and promising, with the next installment in the Hunger Games feature saga, Mockingjay-Part 2, an almost certain money maker given the devotion of the fan base.

In the TV sphere, the most recent season of female prison dramedy Orange is the New Black was well-received and very buzzy, portending more seasons to come.

The company always seems to find a way to pack audiences into movie theaters, or bring them in front of the TV. Its content is generally well chosen and high quality, so I think it'll keep notching hits... which, of course, should keep the money flowing for shareholders.

Lions Gate's upcoming payout will be dispensed on November 10 to stockholders of record as of September 30.