Coal companies are going bankrupt left and right, but it wasn't Obama who killed the coal industry.

Hindsight is always 20/20 in investing, but sometimes it's important to look back on what went right or wrong with investments. In the coal space, every bullish investment thesis coal investors have had in the last decade has turned out to be terrible for investors. There's simply no other way to put it.

China's demand for coal hasn't exploded as planned, there's been no renaissance in the U.S. from clean coal, and economic growth both domestically and abroad hasn't had the impact coal bulls would have hoped. The result has been a number of high-profile bankruptcies like Patriot Coal, Alpha Natural Resources, and James River Coal. Former behemoths like Peabody Energy (BTU) and Arch Coal (NYSE: ACI) are teetering close to bankruptcy. So, what has really happened to coal, and what can we learn from it? 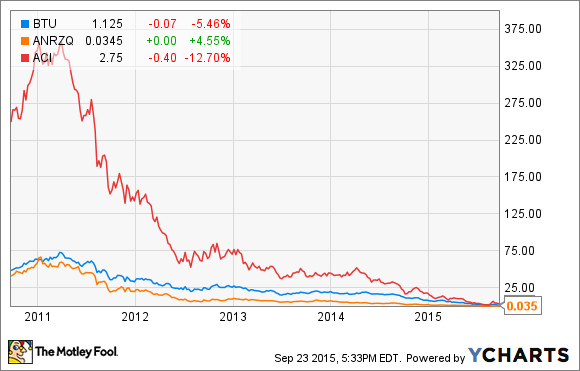 What really killed coal
You might want to blame President Obama for the death of coal, and it's true that he hasn't helped. But tougher regulations on coal plants can't be blamed entirely for the death of the coal industry in the U.S.

The bigger impact on coal producers has been the steady supply of cheap natural gas in the U.S. You can see in the chart below that natural gas prices have plunged in the last decade, and that's at the same time that supply has nearly doubled. All of that energy has to go somewhere, and in this case, it's going into natural gas power plants, which are replacing an aging fleet of coal power plants. 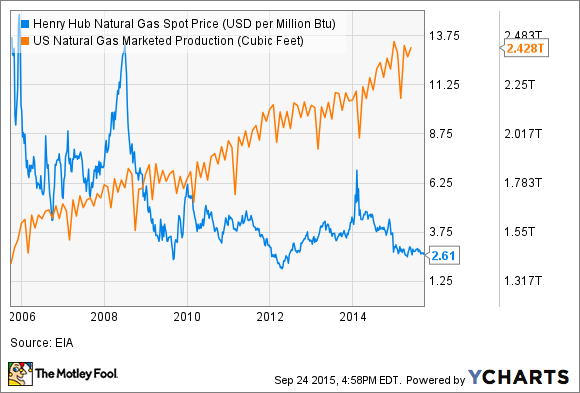 The fact that natural gas has taken the place of coal in the U.S. isn't a surprise. What's shocking is that China's growing economy is shunning coal imports.

China snubs coal
For years, the coal industry's thesis has been that China will fill any void left by falling U.S. demand. After all, China was opening a coal plant every two weeks, and demand growth seemed to have infinite potential. But China doesn't want to be beholden to imports from anyone, and its cities were literally choking on the smog caused by coal plants.

In 2015, the country has made an about-face when it comes to coal, demanding cleaner-burning energy and investing billions of dollars in renewable energy. The result has been a 31.3% decline in coal imports in the first eight months of this year. If you want to know why 2015 has been the year of death in the coal industry, that's the only number you need to know.

Don't fight the larger trends
Coal has taken the brunt of the changes in energy, but it highlights why investors shouldn't fight the prevailing energy trends. It's been apparent for years that cleaner energy sources were growing, and dirty energy sources were coming under pressure from regulators and countries looking to clean up their air (China).

As we look to the future of energy, I see coal as a diminishing source of energy, and I don't see why Peabody Energy, Arch Coal, or even a restructured Alpha Natural Resources will be good for investors. The greater trends in energy are just working away from coal and it's not worth trying to catch a falling knife.