Travis Hoium and Adam Galas
(TMFFlushDraw)
Author Bio
Travis Hoium has been writing for fool.com since July 2010 and covers the solar industry, renewable energy, and gaming stocks among other things. Follow @TravisHoium

Nuclear energy has gone through a lot of ups and downs in the last decade. From a nuclear renaissance to the famous nuclear meltdown in Japan that led countries around the world to abandon nuclear energy altogether.

Does this seeming clean and abundant source of energy have a bright future or is the end near? We asked two of our energy contributors to weigh in.

Adam Galas: Nuclear power may not have a bright future in the US or Europe but globally it's booming.

In fact China recently renewed its commitment to tripling its nuclear capacity to 58 GW by 2020 and India is planning on adding 20 to 30 reactors by 2030, which would increase that nation's reactor count by 100%-150%.

Meanwhile due to growing world population and economic development in emerging economies, global electricity consumption is likely to double from 2007 levels by 2030.

A 2013 study by the World Nuclear Association projects that by 2030, 74 nuclear plants will be retired while 272 are brought online. China -- a nation that has long struggled with catastrophic air pollution but a need to expand power generation to fuel economic growth – is expected to construct 108 of these new reactors.

Global growth of nuclear power is likely to be aided by advances in technology that address two of the biggest concerns with current reactor design: the production of radioactive waste, and the threat of a meltdown.

The latest, 4th generation Pebble Bed Modular Reactor -- or PBMR- - is designed in a way that it is exceedingly resilient to a melt down due to both active and passive safety features. This means that, due to the way the reactor and its fuel interact, even should all cooling systems fail and no people intervene, the reactor will automatically shut itself down. 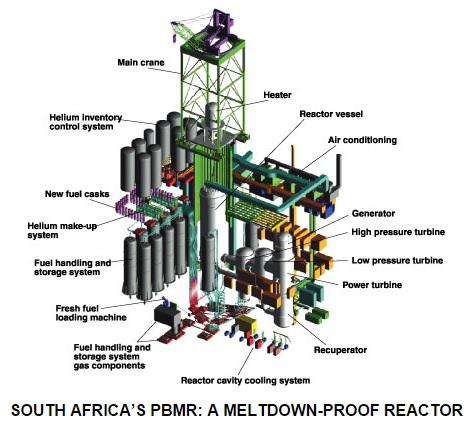 Better still, most 4th generation reactors are also fast neutron reactors which can use nuclear waste and even plutonium as fuel. That means that the issue of what to do with long-lived radioactive waste or concerns over nuclear weapons proliferation are essentially rendered moot by this new technology, which also generates power 50% more efficiently than current 3rd gen reactors. That helps to make nuclear power less costly and better able to compete with renewable power.

In fact, since nuclear reactors can generate power around the clock unlike wind and solar, it's not necessarily true that renewable energy will prove more cost effective.

Travis Hoium: There's no denying that nuclear energy is booming in developing countries and that it's all but dead in the U.S. and many parts of Europe. So, let's start with that.

The fourth generation, ultra-safe, reactors Adam talked about are also only in research phase, so they're still a hypothetical from a commercial perspective.

The other thing that Adam, and most nuclear energy bulls, fail to talk about is an important one: Cost. What exactly does it cost to build a nuclear plant today?

The cost of the Hinkley Point nuclear power station in the U.K. has ballooned to 25.5 billion pounds, the Vogtle nuclear expansion in Georgia is 3 years behind schedule and is now expected to cost over $14 billion. Meanwhile, in China the National Development and Reform Commission set a proposed wholesale power rate of 7 cents per kWh for nuclear power, which wasn't expected to be high enough for power producers to make a profit.

It's not necessarily important to know the details of any given project, but it is important to understand that nuclear power plant costs are rising and 7 cents per kWh is the bottom end of what electricity might cost from them. In the U.S., investment bank Lazard estimates that the energy from nuclear energy would cost 9.2 cents per kWh at best.

The reason this is important is because the cost of renewable energy is falling rapidly and that's becoming a big competition for nuclear power plants. Solar energy bids have been seen below 6 cents per kWh without any subsidies and the Department of Energy and Lawrence Berkeley National Laboratory say that wind power costs as little as 2.5 cents per kWh.

It's true that solar and wind are intermittent sources of energy, but considering the decade long timeframe it takes to build a nuclear plant and the progress made in renewable energy in the past 10 years would you bet that the energy storage problem is solved first or nuclear reactors cut costs?

I'm betting on renewable energy solving its issues and becoming a viable caseload source. I'll take an energy source that's cutting costs any day over one that's seeing costs spiral out of control. That's why I think it's only a matter of time before nuclear energy is seen as a high cost luxury that even developing countries can't afford.