Please ensure Javascript is enabled for purposes of website accessibility
Log In Help Join The Motley Fool
Free Article Join Over 1 Million Premium Members And Get More In-Depth Stock Guidance and Research
By Travis Hoium, Rich Smith, and Jason Hall - Sep 27, 2015 at 10:05AM

Could innovation in the airline industry make flying better and cheaper for consumers?

The airline industry is constantly evolving, but most of its evolution is incremental in nature. New aircraft may be more fuel efficient, services change, and booking goes online, but flying itself hasn't changed much in decades.

That may change over the next few years as airlines and airplane manufacturers explore new technologies. Here are a few developments that have caught our eye.

Travis Hoium: What if you could fly an airplane 24 hours a day powered only by the natural energy from the sun that hits the aircraft as it flies through the air? It may sound like something from science fiction but it's actually reality today.

This summer, Solar Impulse 2 made the longest leg of its trip around the world, a 5 day, 5 night flight from Japan to Hawaii. The aircraft is powered by nothing but the sun's energy, powering flight and charging batteries by day and using the battery's energy at night.

Solar Impulse may not completely show the future of air travel. After all, it's an airplane designed specifically for solar flight and it isn't carrying paying passengers. But it does show that solar cells can be incorporated into an aircraft to generate some free auxiliary power.

Remember that fuel is the single largest cost category for airlines, so having an energy production system built onto the aircraft could save millions annually. It may be a decade before we see solar cells on commercial flights, but it's not too far on the horizon and that could help make flying more efficient than it is today.

(Hint: The correct answer is "Hurray! Australia has better beaches than Albuquerque!")

The technology that could make this dream a reality is called a supersonic combustion ramjet, or "scramjet." At its essence, it's a way to fuel a fast-moving aircraft (in part) with oxygen scooped out of the atmosphere, rather than having to carry extra fuel on-board the aircraft. That makes the plane lighter, faster, and cuts fuel costs. It's also a technology that permits an aircraft to fly very fast, and very high, at altitudes where there's less atmosphere around, causing friction and slowing the airplane down.

Many companies are working to develop scramjets today. One that's been making particularly good progress is a little UK company going by the name of Reaction Engines, whose technology has won endorsements from the British government, the European Space Agency, and even the U.S. Air Force. Reaction's experimental SKYLON scramjet engine is scheduled to take its first test flight in 2019. Assuming the tech continues progressing as it's done so far, hour-long flights between New York and London, and 1.5 hour flights from L.A. Sydney, could be as little as 10 years away.

Jason Hall: Many of the annoyances of modern airline travel are tied to the shape of jets, which are little more than a long tin can. Not only does this make the boarding and de-planing process feel like watching grass grow, it makes it difficult at best to move around. Just ask anyone with a window seat who's had to use the restroom during meal or beverage service. 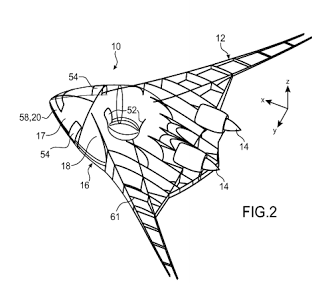 And while it's a stretch to say the industry is "set" to do anything about it, what with the fact that pretty much everything about modern air travel from terminals to maintenance bays set up for the traditional plane shape, there are better, more aerodynamic shapes that would also allow for more flexible and open passenger seating.

Late last year, Airbus filed a patent for what has since been dubbed the "flying doughnut":

Airbus claims that this design would allow for better aerodynamics, and that seating could be laid out in a more "auditorium" design in the center of the plane, giving passengers more freedom of movement, while also giving airlines more ways to customize seating and amenities such as lounges and bathrooms.

Airbus may never move forward with the flying doughnut, but it's a reminder that the current "tube with wings" design is less about being the best, and more about the standard that the entire industry – and its infrastructure of airports – has been built around over the past 50 years.

Flying in the future
Maybe it's wishful thinking, but maybe flying in 50 years will be powered partially by the sun, be faster than the speed of sound, in aircraft that are actually comfortable to fly in. At least one of those improvements may make its way to commercial aircraft and that may change how we fly forever.