Please ensure Javascript is enabled for purposes of website accessibility
Log In Help Join The Motley Fool
Free Article Join Over 1 Million Premium Members And Get More In-Depth Stock Guidance and Research
By Evan Niu, CFA - Sep 27, 2015 at 9:00AM

Based on foot traffic data to Apple Retail stores, Apple could potentially set a new record for this year's iPhone launch.

It's going to be a big weekend for the iPhone 6s and 6s Plus. Image source: Apple.

It's that time of year again. 'Tis the season for millions of Apple (AAPL 2.54%) customers to line up for days outside of Apple Retail stores in order to get their hands on the newest iPhone model. iPhone launches are very much a global affair, and Apple has finely tuned its ability to coordinate product roll outs of this scale. Considering the common theme of iPhone supply constraints around launch where demand far outstrips available inventory, being able to ramp up supply and ensure widespread distribution is easily just as critical to the new model's financial success as adding new features.

Each year, reports surface of Apple ordering up a record number of iPhones from its supplies and contract manufacturing partners. In July, the Wall Street Journal said Apple was ordering upwards of 90 million units by the end of 2015 in preparation for the launch. Investors shouldn't put too much weight in those reports because Apple's orders dynamically change all the time and even if the report is accurate it's only a sliver of the bigger picture, but at the same time there may be some directionally relevant data.

Now investors have a new third-party data point to consider, which suggests that Apple could sell as many as 13 million iPhone 6s and 6s Pluses this weekend.

Apple Retail foot traffic is soaring
This data point comes from an unlikely source: Foursquare, the popular app used to check in to local businesses. Since Foursquare collects and aggregates location data, the start-up has built a massive database around foot traffic. Foursquare has analyzed historical foot traffic trends for prior iPhone launches as they compare to the official sales figures that Apple subsequently shares, with the hopes of gleaning some insights.

Foursquare believes there is a strong correlation between the increase in foot traffic and the number of iPhones that Apple ultimately sells. Fousquare also cross references quarterly iPhone sales with its traffic data to get something of a baseline. The net result of Foursquare's number crunching is that the company predicts that Apple will sell between 13 million and 15 million iPhones this weekend. That would be quite a beat over last year's 10 million in launch weekend sales, which Apple has already said it is "on pace" to beat. 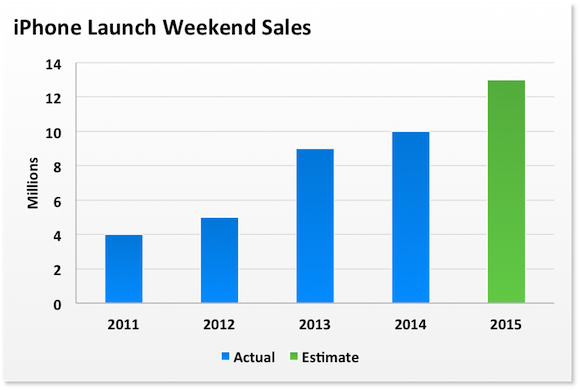 Here's how 13 million units would compare to prior years. Source: Apple.

Foursquare is the first to admit that its approach has limitations. Foot traffic to Apple Retail stores are just a tiny portion of the relevant data, and Apple sells the majority of its phones through carrier distribution as well as its own online store.

The reason why this is important for investors is that Apple will be facing a rather tough comparison to Q4 2014's mind-boggling launch when it shipped nearly 75 million units. It will be difficult to beat such a lofty figure, which is why it's conceivable that Q4 2015 could be the first year that Apple posts a year-over-year decline in unit sales (which would be fine anyway).

Since the market focuses on the high-level figures, cares more about Q4 figures than Q3 figures, and doesn't usually stop to think about changes in channel inventory or nuanced timing differences, any help that Apple can get to hit a higher headline number will be greatly appreciated by investors.