Please ensure Javascript is enabled for purposes of website accessibility
Log In Help Join The Motley Fool
Free Article Join Over 1 Million Premium Members And Get More In-Depth Stock Guidance and Research
By Tyler Crowe, Jason Hall, and Matthew DiLallo - Sep 29, 2015 at 9:15AM

Refiners are a great way to invest in the oil and gas market if you want to benefit from falling oil prices, and these three are some of the best.

Despite the big downturn in the energy market over the past year or so, one segment of the oil and gas world has done quite well: refiners. Cheap crude has made for a nice feedstock for their facilities, which has allowed some of the companies in the space to churn out some pretty impressive results recently. For investors looking for steady, cash-generating investments that can act as a natural hedge to more traditional oil and gas investments, refining stocks are a great place to look. Then again, simply buying a company because it is labeled "refiner" may not be the best strategy, either.

So we asked three of our energy contributors to select a superior refiner in its space. Here's what they had to say:

Tyler Crowe: One company that I have kept an eye on for a while is HollyFrontier (HFC). It may not be one of the biggest refiners in the space or one that has access to export markets like Gulf Coast refiners, but one thing it has is a great management team that is very good at allocating capital and returning cash to shareholders.

All of HollyFrontier's refiners are located in either the Midcontinent or Rocky Mountain region of the U.S., so it pretty much exclusively serves domestic markets. The reason it can compete so well in this space, though, is that it has a robust infrastructure network it owns through Holly Energy Partners (HEP 3.42%). This network enables the company to routinely source crude oil sourced at prices lower than the benchmark West Texas Intermediate. So far this year, it has been able to secure oil for its refineries at about a 5% discount from spot prices. 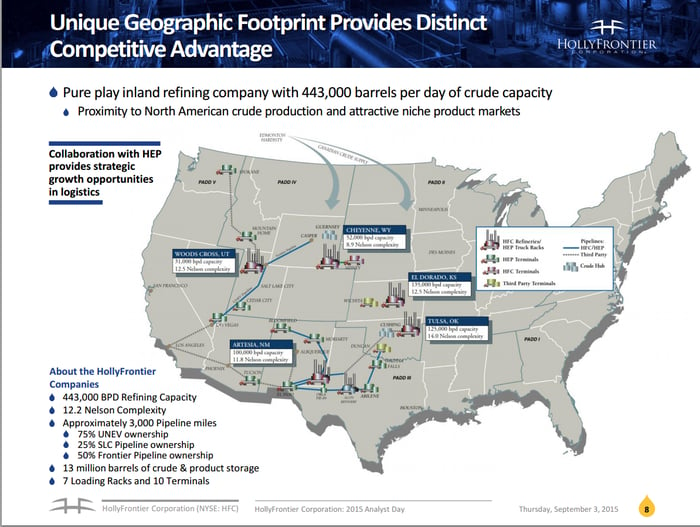 On top of this sourcing advantage, management has put a great onus on efficient operations and controlling costs. These efforts, combined with well-placed capital investments in its refineries and infrastructure, allow the company to generate lots of excess cash, which it gives back to shareholders generously through dividends and share repurchases. In fact, this high level of cash generation and prudent capital discipline have resulted in the company generating the highest average returns on capital employed in the refining space over the past five years. 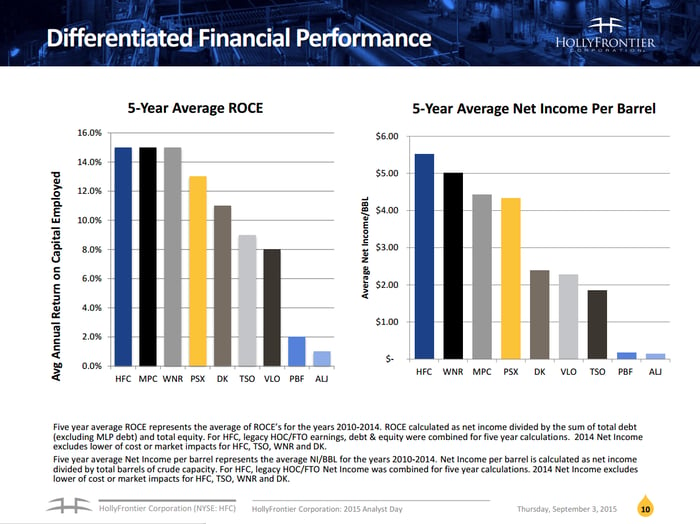 With that kind of track record, HollyFrontier looks like a very compelling investment.

Matt DiLallo: Valero Energy (VLO 2.88%) is really, really enjoying lower oil prices. Last quarter, the company's refining segment produced $2.2 billion in operating income, which was more than double what it delivered in the year-ago period. Fueling that income is the company's margins, which are robust thanks to lower oil prices. Furthermore, it is enjoying healthy demand as it's pumping out as much gasoline and diesel as it can, with throughput volumes averaging 2.8 million barrels a day, which was 87,000 barrels a day higher than the prior period.

These strong operating conditions are filling up Valero's coffers with a lot of cash. However, it doesn't need a whole lot of cash to operate its business, so it's returning most of it back to investors. In fact, it has increased its shareholder distributions this year so that it plans to return 75% of 2015 net income to investors. The bulk of that cash will come from stock buybacks -- it recently bolstered its buyback authorization by $2.5 billion. When combined with the $400 million it had left on its previous authorization, Valero now has the capacity to buy back roughly 10% of its outstanding stock.

Even with all the cash it is returning to shareholders, it's still investing in growth projects, with plans to spend $1.5 billion this year. The bulk of those projects are designed to increase its access to cheap North American crude oil, which should only improve its refining margins further. On top of that, it has several interesting projects under consideration that would enable it to take advantage of the abundance of cheap energy resources in North America.

Suffice it to say, if you are looking for a great refining stock, Valero Energy should be near the top of the list.

Jason Hall: Refiners are much more greatly affected by volume and demand than they are by fuel prices. The price of refined products like gasoline, diesel, and jet fuel are heavily attached to the price of oil, which is the major input cost for refiners, as compared to the fixed costs of operating a refinery.

In other words, they can still make good money even when oil prices fall, as long as demand stays relatively stable, and while demand growth may be slowing, global demand for refined products remains very strong.

The thing is, my favorite refiner (and I bet Tyler and Matt are sick of hearing me say so), Phillips 66 (PSX 3.09%), isn't my favorite because of its refining operations.

Don't get me wrong: Phillips 66's refining business (and the marketing business that sells the refined products) produces the lion's share of the company's cash flows and profits, and is likely to keep doing so for years to come. But it's what it is doing with those cash flows that has me most excited about the long-term future of this company: investing in midstream and petrochemicals growth.

Phillips 66 will have doubled its petrochemicals business when the current expansion products are finished on the U.S. Gulf Coast, and its midstream expansion will connect several major oil and gas plays to pipelines.

If you're looking for a dependable (and growing) dividend, and a company with great long-term growth prospects, Phillips 66 is the hands-down winner in the refining business, with much more to offer than just refining.