Please ensure Javascript is enabled for purposes of website accessibility
Log In Help Join The Motley Fool
Free Article Join Over 1 Million Premium Members And Get More In-Depth Stock Guidance and Research
By Reuben Gregg Brewer - Sep 29, 2015 at 7:45AM

Freeport McMoRan is making big moves, but if you watch closely, they may not be what they seem.

Freeport-McMoRan (NYSE: FCX) sold $1 billion worth of new shares on Aug. 10. Investors would probably be happy if that were done to support growth spending. But it wasn't, and that's a problem you'll want to get to the bottom of in more ways than one.

Big numbers
One billion dollars is a huge number. In this case, that billion involved the sale of nearly 1 million shares of Freeport stock. At the end of the second quarter, the company had around 1.04 billion shares outstanding. So its share count is now somewhere around 1.14 billion shares. That's about an 8% jump in the share count. Not a small increase, but it gets worse. 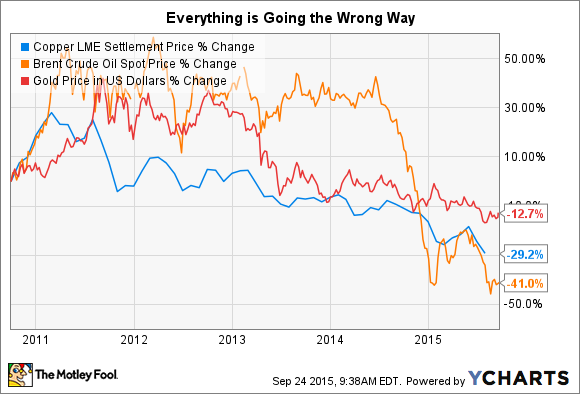 In the news release, the company explained:

The actions we have taken to cut costs, significantly reduce capital expenditures in our mining and oil and gas businesses, and raise equity proceeds are necessary in the current period of weak and uncertain market conditions. These measures and actions we are taking to enhance shareholder value will strengthen our financial position and preserve our valuable resources for improved conditions in the future. We are focused on strong execution of our plans which position us for future success.

In other words, the company is in a pretty tight spot right now and is strapped for cash. So it had no choice but to sell shares. Although some of this is a result of falling commodity prices, some is self-inflicted since Freeport expanded into oil at pretty much the worst possible time. That led to a sharp increase in the company's debt levels and, thus, the concern about having enough cash around to survive the current downturn.

Shareholder value?
I won't argue with the idea that a cash infusion will give Freeport some financial breathing room, allowing it to live to fight another day. That's a good thing, and long-term investors should probably be thankful the company took the actions it did. But I'd hardly call it enhancing shareholder value, as the company so boldly proclaimed in its release.

That said, there's will be a perverse impact from this move in the near term -- Freeport's losses will get smaller. That sounds like a good thing, right? Not really. Here's what's going on. The miner's loss in the second quarter was $1.78 a share. But that was based on 1.04 billion shares. If, instead, we spread the net loss of $1.851 billion over 1.14 billion shares (the new number after the stock sale), the per-share loss would shrink to $1.62 a share.

That's an improvement of more than $0.15 a share -- only it isn't an improvement in the company's business. It's just spreading a loss over more shares.

It's important to remember that the opposite happens when you actually make money. For example, if the company had net income of $1.851 billion, it would translate to $1.78 a share in earnings based on 1.04 billion shares. Up the share count to 1.14 billion, and earnings would fall to $1.62 a share. That's a nearly 10% drop.

Remember the math
The company isn't trying to pull a fast one. It's really just trying to make it through the commodity downturn in one piece. That's clearly the right thing to do, and to be fair, avoiding bankruptcy court does preserve the long-term value of the company for shareholders. However, when you see the next earnings release, make sure you pay close attention to the impact of the new share count. Your mind might cling to the previous per-share loss numbers, but they really aren't as relevant anymore because the newly issued shares will probably cause a perverse impact that isn't nearly as good as it seems if you don't look beyond the headlines.