GATX Corporation (NYSE: GMT) has a rich history of providing relatively steady income growth for its investors. The company, which was founded in 1898, first started paying quarterly dividends in 1919. Since that time the company has paid an uninterrupted dividend for 96 consecutive years and it recently raised its payout by more than 15%.

That certainly qualifies the company as a solid choice for investors seeking steady income. That being said, it does fall a bit short of the official definition of a dividend aristocrat, which is a company that has grown its dividend for 25 straight years. As the chart below shows, the company has had to reduce, but not suspend, its dividend twice over the past 25 years, though it has been able to resume growth shortly thereafter. 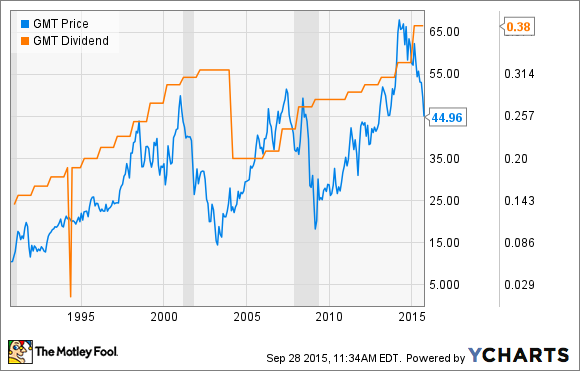 Still, just because the company fails to meet the definition to the letter doesn't mean income investors should toss this one aside. In aggregate the company has grown its dividend over the past 25 years. Further, with a current dividend yield of 3.4%, and a revenue backlog underpinned by long-term contracts, GATX Corporation is certainly worth a closer look.

GATX's core business is railcar leasing in North America where it is the largest independent railcar lessor. As the slide below notes, that segment contains approximately two-thirds of the company's assets. 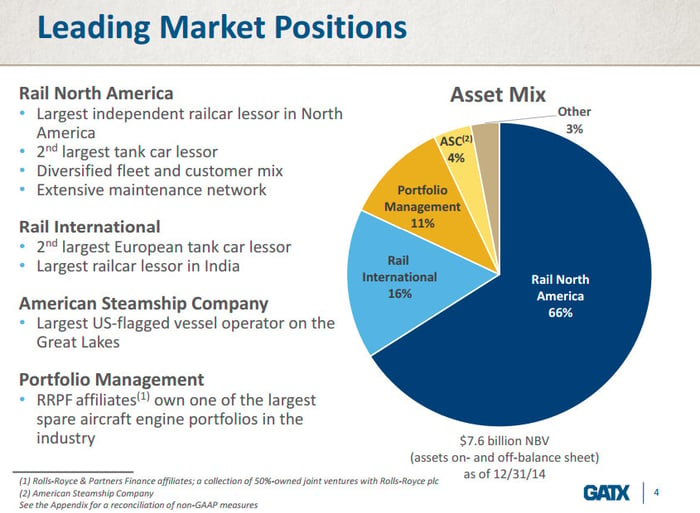 In addition to that, we can see that the company has a large international railcar leasing business, it also owns the largest U.S.-flagged vessel operator in the Great Lakes, and it owns the largest portfolio of spare aircraft engines. While, clearly not among the most glamorous businesses to own, they do deliver steady cash flow, which is what supports the company's strong dividend.

While GATX's core business is leasing railcars, the company is also very active in managing its portfolio. As such, it routinely divests older assets and often generates substantial accounting profits from these sales. As this next slide notes, this combination of recurring operating cash flow from leases as well as proceeds from portfolio divestments produces a lot of cash for the company each year. 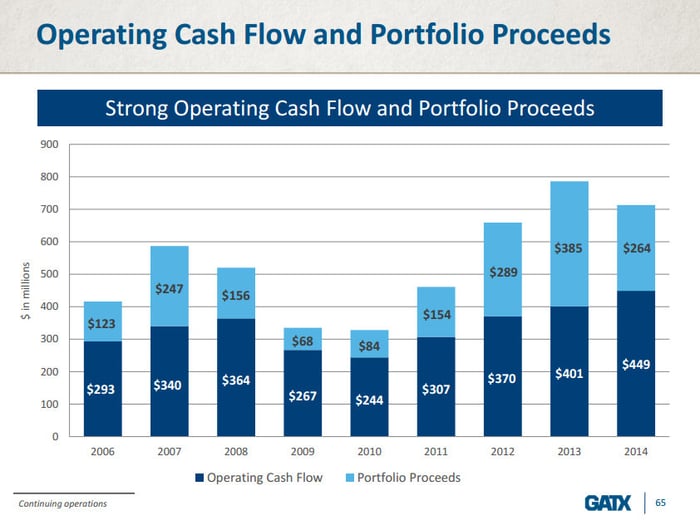 It's worth noting that the company's operating cash flow has generally grown over the past decade. However, there was a lag after the financial crisis when its operating cash flow and portfolio proceeds both fell. Still, overall cash flow is growing, which is what is supporting a growing dividend.

The future of GATX Corporation
Given that the company is always turning over its portfolio, it spends a lot of money each year to make sure its assets are fresh while also adding assets to its portfolio. In fact, since 2006 the company has grown its asset base from $5.7 billion to $7.6 billion. Looking ahead, the company has committed more than $2.9 billion in future capex and lease payments to both replenish its portfolio and add new assets. This growth is due to the company's desire to participate in the growing railcar leasing markets both in North America and Internationally. Further, those assets are backed by a very robust $4.2 billion backlog of future lease and loan receipts. As a result, GATX has a clear path for future cash flow growth.

What might hinder GATX's dividend growth
That being said, the company's business isn't completely immune to a global economic slowdown. As this next slide notes, when the economy slows it impacts GATX's ability to renew leases and increase lease rates. 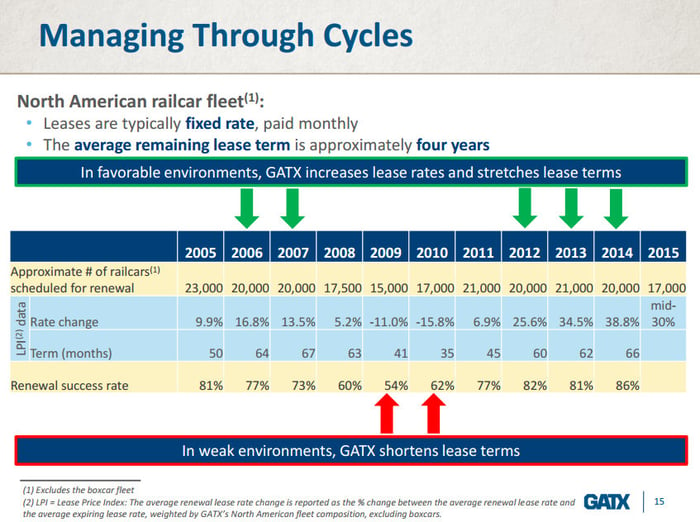 What this suggests is that the next time the global economy slows down, it will likely have an impact on GATX's business just as we see what happened in the aftermath of the financial crisis in 2008/2009. This could lead to lower dividend payments as the company manages through the downturn. However, as it has shown over the past 96 years, the dividend is unlikely to be completely suspended and does tend to grow rather handsomely over time.

Investor takeaway
GATX is very close to being a dividend aristocrat as it has a long history of dividend growth. However, as its history has demonstrated, when times do get really tough its dividend has been reduced. That being said, it has been able to quickly recover when conditions improve.

This makes GATX an interesting company for an investor's watch list. Given its history, the ideal time to buy would be toward the end of a recession. Its stock price will likely have fallen as its dividend might have been cut. However, when the cyclical upturn starts, GATX has demonstrated its ability to quickly capture better terms and resume solid dividend growth, which would lead to robust shareholder returns.