Please ensure Javascript is enabled for purposes of website accessibility
Log In Help Join The Motley Fool
Free Article Join Over 1 Million Premium Members And Get More In-Depth Stock Guidance and Research
By Jason Hall - Sep 30, 2015 at 8:58AM

Say it with me: market volatility.

What: Shares of consumer and foodservice packaged foods company Post Holdings, (POST -0.47%) fell 10% on September 29, and are down almost 20% in less than a week. This has slowed what has been a big-time bounce-back year for the stock following a pretty tough 2014, where investors sold for fear that the company's growth strategy wasn't paying off. 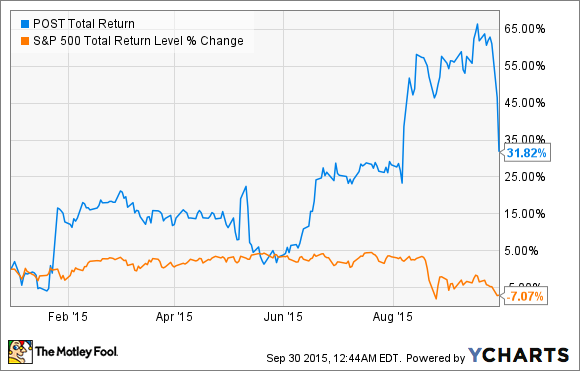 So what: There's just not any news out there about Post Holdings to explain the big sell-off, but it should be noted that the market has been incredibly volatile this year overall. After all, both the Dow Jones Industrials and S&P 500 had one of the worst trading days of the year earlier this week.

In other words, sometimes a stock price just falls. All it takes is one or two very large shareholders to sell and that can cascade into more selling, which leads to -- you guessed it -- even more selling. And by the end of the trading day, a perfectly innocent stock is down 10%. And this can occasionally carry over for a few days of selling, and before you know it, a company that's done well in recent quarters and hasn't really reported any bad news (or any news in this case) is selling for 20% less than it was a week ago.

Now what: This is when investors need to remember something very important: This is why we have a market.

No, it's not reassuring to own a stock that suddenly loses 20% of its value for no apparent reason, but oftentimes no news is, well, no news. And that's probably the case for Post Holdings over the past week or so.

After all, the stock is still up more than 30% as of this writing (after market close on the 29th) in 2015, and it's likely that a lot of the selling is short-term traders locking in some short-term profits, as well as other short-term traders getting out on the short-term drop. There's a good chance that before long that pendulum will begin swinging the other way, and so-called "momentum" traders will jump in, looking for a bounce-back. Some of those very traders may be ones who bought at the peak a few weeks ago and then sold at a loss in the past few days. Thus goes the challenge of trying to guess the short-term movement of stocks.

But for long-term investors looking at the bigger picture, the business remains just as fundamentally sound today as it did at the stock's peak a month or so ago. Don't mistake the market's short-term view of the stock for a fundamental change in the business. To paraphrase Warren Buffett's mentor, Ben Graham, in the short term, the market is a voting machine; in the long run, it's a weighing machine.

In other words, if you're investing for the long term, Post Holdings' business hasn't suddenly gone bad. The stock has just gotten cheaper.

Editor's note (Oct. 1, 2015): After publication of this article, we learned that Cal-Maine Foods, a major egg supplier, announced that avian flu was having a major impact on its business, and shares of that company tumbled 12% on the news. This news almost certainly played some role in the sharp decline in Post shares on the same day.

However, investors should consider that Post's business is much less affected by egg sales than Cal-Maine's, and that the company has been actively communicating the situation for months now, while Cal-Maine has been relatively quiet. Furthermore, Post also took a step recently to address the impact, acquiring Willamette Egg Farms in late September.

In summary, it's probably still momentum, but with a twist of pseudo-related news at a competitor that's not directly material to Post.