A well-known consultancy and a famous defense company both upped their payouts last week.

We're about to swing into another earnings season, and we can expect the usual spate of dividend hikes during the period. As if to get us ready, several companies have gotten a head start and lifted their payouts.

That list wasn't too big last week, but it did include a well-known stock market name here and there. Two of these were:

Accenture (ACN -1.66%)
Life is good for this long-standing consulting company, so why not share some of the fortune with shareholders? In a worthy effort at doing so, Accenture has lifted its semi-annual dividend by 8% to $1.10.

The company apparently likes raising its dividend as much as it likes dispensing business advice. It tends to raise it once per year at around this time, and generously so -- since initiating the payout in late 2005, the annual distribution has ranged from $0.30 to the present $2.20 per share. 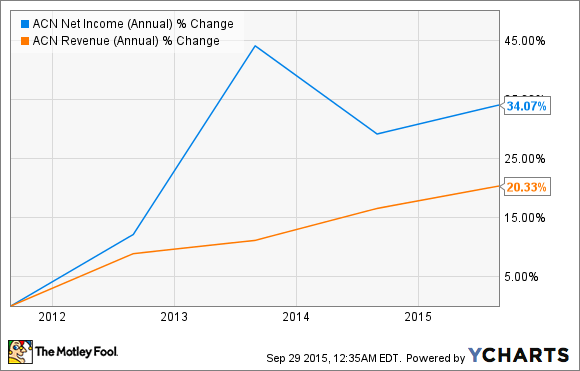 The company's business is solid, thanks in no small part to its winning big projects recently, like a big one to fix the government's wonky HealthCare.gov website. Free cash flow is well in the black (typically coming in at the $3 billion to $4 billion level), and is more than sufficient to fund the enhanced payout.

Accenture's new dividend will be handed out on November 13 to shareholders of record as of October 16.

Lockheed Martin (LMT 0.41%)
As with Accenture, this veteran defense company tends to hike its payout with military-like regularity. It's now time for the annual raise of its quarterly dividend, which has been increased an even 10% to $1.65 per share. 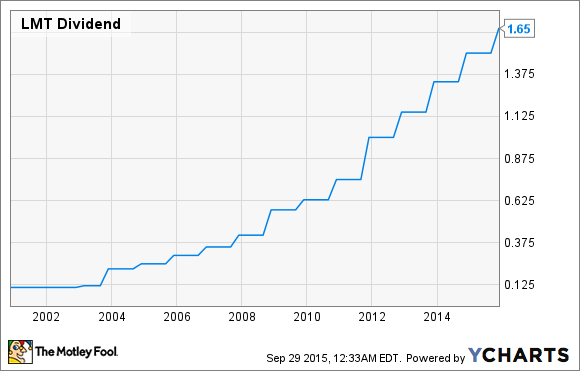 The company lands consistently in the black, although top line has been largely stagnant over the past few years. It seems to be determined to change this through acquisitions -- or at least one big one; this past summer it inked a deal to buy storied helicopter maker Sikorsky Aircraft for $9 billion.

That's part of a move to increase its concentration on military gear, in anticipation of higher spending on such materiel from the U.S. government. While it takes to the skies with Sikorsky, it's slimming down on the ground. The company has stated that it is conducting a strategic review of a pair of non-military divisions, which will most likely be sold or spun off.

Meanwhile, Lockheed Martin's legacy cost-cutting efforts are helping to buoy bottom line, and adding to free cash flow. Yes, the company is busy spending, but it's also making, so I wouldn't worry too much about the viability of its dividend.

Lockheed Martin's upcoming payout is to be dispensed on December 24 to stockholders of record as of December 1.

Eric Volkman has no position in any stocks mentioned. The Motley Fool recommends Accenture. We Fools may not all hold the same opinions, but we all believe that considering a diverse range of insights makes us better investors. The Motley Fool has a disclosure policy.