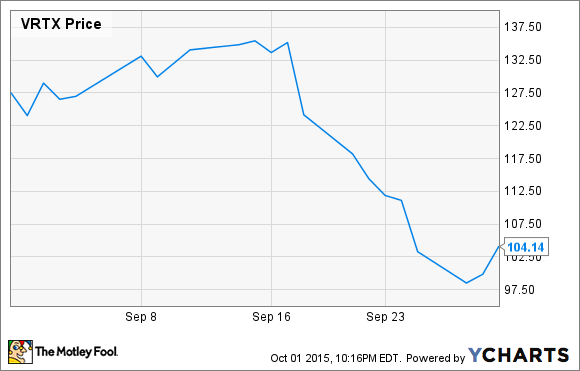 As the saying goes, if you were a shareholder in Vertex Pharmaceuticals (NASDAQ:VRTX) last month you "probably shouldn't have gotten out of bed." Shares of the cystic fibrosis-focused drug developer plunged 18% on the month, according to data from S&P Capital IQ, on the heels of a double-dose of bad news.

The big catalyst that weighed on Vertex's stock was the announcement by presidential hopeful Hillary Clinton that she would propose (and impose) a prescription drug reform plan if elected to the oval office. Vertex finds itself directly in the sights of Clinton's proposal, which would cap monthly out-of-pocket costs for consumers at $250 for eligible drugs and focus the governments' efforts on negotiating lower prices with drugmakers. Vertex's two key cystic fibrosis drugs, Kalydeco and Orkambi, come with wholesale costs of just below $300,000 and $259,000, respectively, and they've regularly drawn the ire of consumers who simply can't afford these prices.

The other issue last month was the release of positive phase 1 data from Concert Pharmaceuticals (NASDAQ:CNCE) and its cystic fibrosis drug hopeful CTP-656. In a nine-patient head-to-head with Kalydeco, CTP-656 "achieved a superior pharmacokinetic profile to Kalydeco," according to Concert's press release. Additionally, Concert noted that the increase in plasma levels at the 24-hour mark was due to its parent drug, whereas this wasn't the case with Kalydeco. The vast majority of Vertex's revenue stream is based on its CF drugs. Thus, if another therapy comes along that is more efficient and/or markedly cheaper, it could spell doom for Vertex.

The real question that needs tobe asked here is whether or not Vertex is worth yourinvesting consideration after losing more than $5 billion in market value last month.

To that end I'm not entirely certain.

On one hand, Vertex has the premier CF treatments on the market, and it likely will for at least a few years to come. Without competition or drug reform, Vertex's CF portfolio could wind up generating $10 billion in peak annual sales.

On the other side of that equation, Vertex is already valued at more than 2.5 times peak annual sales, yet it's not even on pace to hit $1 billion in sales this year. Wall Street and investors seem to believe that Vertex won't hit any speed bumps along the way with its current valuation, which is rarely the case for any drug developer.

The other issue is that Vertex is heavily reliant on CF for revenue. Beyond CF Vertex's hope rests with two early stage oncology products. If a competitor does emerge for Kalydeco or Orkambi, Vertex could be in big trouble.

My suggestion would be to wait for an even more substantial pullback in Vertex shares before considering an investment considering these aforementioned risks.