Please ensure Javascript is enabled for purposes of website accessibility
Free Article Join Over 1 Million Premium Members And Get More In-Depth Stock Guidance and Research
By Andrew Tonner - Oct 2, 2015 at 11:01AM

BlackBerry stock continues to trade lower in the wake of yet another disappointing earnings report. Whether investors stand a chance of profiting from its tenuous business model pivot remains far from a sure thing.

It's been a tough year for Canadian fallen smartphone star BlackBerry ( BB -3.66% ).

Riding a wave of optimism on the arrival of supposed turnaround specialist John Chen as CEO in November 2013, BlackBerry saw its share price rally roughly 41% from the announcement of Chen's appointment and the beginning of 2015. However, as its business momentum continues to dwindle, its shares have appreciably underperformed this year. 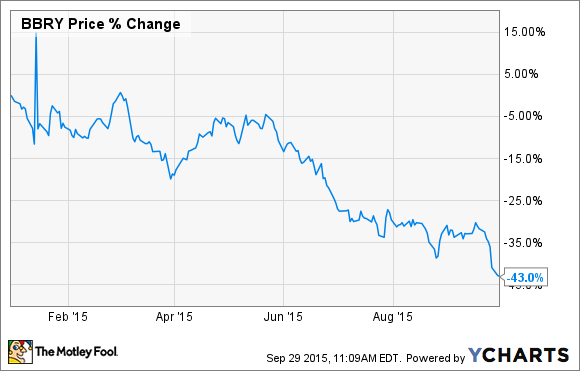 BlackBerry recently reported its FY 2016 Q2 earnings, and investors were again unimpressed with its progress. So as the former smartphone power continues to struggle to find a viable long-term business model, has BlackBerry become a terminal short?

Another poor performance from BlackBerry
On the surface, BlackBerry's earnings report doesn't inspire optimism. Total revenue fell precipitously during the period, from $916 million in the same quarter last year to $490 million. GAAP gross margins contracted from 46.4% to 37.8%, and BlackBerry's loss per share improved only moderately, from -$0.39 to -$0.24, still leaving plenty to be desired. However, as I dug further into the earnings release, a number of signs that a turnaround might be taking hold stood out to me.

Most notably, impressive 33% growth from software licensing revenue helped drive a 19% increase in BlackBerry's software and services revenue. The company continues to strategically acquire additional mobile enterprise software companies to strengthen the product segment Chen hopes to grow into its sustainable, long-term financial anchor. However, producing a mere $74 million in sales for the quarter, software and services represent just 19% of BlackBerry's overall sales. For this strategy to support the business long-term, BlackBerry needs to grow this critical segment meaningfully in the coming quarters.

BlackBerry's handset sales continue to be abysmal. For the quarter, BlackBerry shipped roughly 800,000 handsets at an average selling price of $240, and it reduced its FY 2016 target handset sales from 10 million to 5 million, a rate at which the company claims it can still profitably operate its smartphone division. However, on an annualized basis, BlackBerry's FY '16 Q2 shipments sit well below its new 5 million-device target. To help bolster device sales, BlackBerry also announced plans to sell a long-discussed smartphone running Google's Android operating system, which should be ready to ship before the end of calendar year 2015.

But as bad as things look, conditions at BlackBerry must deteriorate a lot more to make the stock a terminal short.

Too risky to short; too uncertain to buy
I find myself more bearish than bullish on BlackBerry, although neither sentiment weighs heavily enough for me to justify action on the short or long side.

Although things remain tenuous, BlackBerry still enjoys ample liquidity. At the end of the quarter, the company carried cash and investments of $3.35 billion, versus long-term debt of just $1.3 billion. Liquidity and solvency don't appear to be risks for BlackBerry, and the company generates positive cash flow from operations, so it appears in a position to weather its business transformation for the foreseeable future.

Chen has also signaled that he expects revenue to increase sequentially in both of BlackBerry's coming two quarters, potentially implying a bottom in its revenue reset as it de-emphasizes smartphone sales. But it's coming from the CEO, so take it with a grain of salt. However, despite BlackBerry's bad quarter, there's evidence to suggest it could turn the corner in its business-model overhaul to caution against shorting.

Why BlackBerry Stock Popped 12% in August

Why BlackBerry Stock Fell 16% in July