What: Offshore oil driller Atwood Oceanics, Inc. ( ATW ) saw its stock shoot up more than 10% on Friday, Oct. 2. This is a small positive bit of news for Atwood Oceanics shareholders, who have seen the stock fall more than 40% in 2015, even after Friday's bounce: 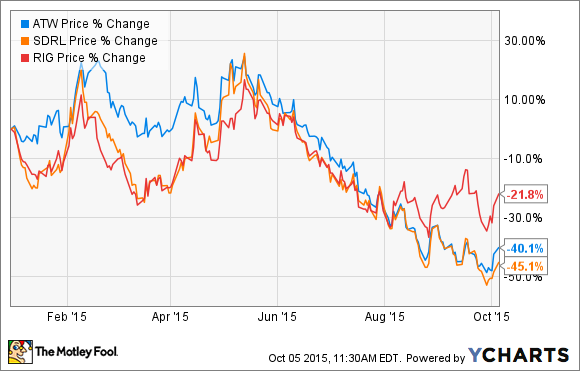 So what: As you can see from the chart above, Atwood isn't the only offshore driller that's down big so far this year. Similarly, it isn't the only offshore drilling stock to rebound strongly since last Friday. Atwood did announce a one-year contract extension on the Atwood Achiever ultra-deepwater rig late on Oct. 1, and that probably played some role in the company's big stock jump the next day. However, rising oil prices have lifted the entire offshore drilling industry over the past several market days, as you can see in the chart below: 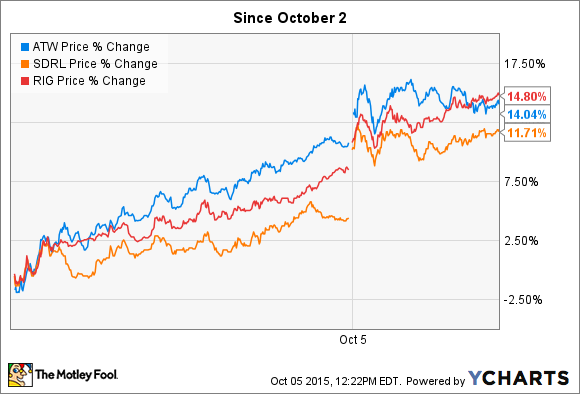 Now what: You can expect plenty more days like this in the weeks and months ahead, frankly. There's going to be a lot of volatility in the offshore drilling sector, and largely based on what oil prices are doing.

The catch is, from one day to the next, that volatility has absolutely nothing to do with Atwood's business, though its medium- and long-term prospects are certainly tied to oil prices rising, because that will make the kinds of oil reserves where Atwood specializes in drilling -- located in harsh environments and ultra-deepwater -- a better investment for oil companies.

But as things stand today, offshore drilling is still a mess. There are too many rigs competing for too little business, though Atwood's high-spec fleet is somewhat insulated from that. But that said, the company has a lot of its fleet coming off contract over the next year, and until it gets new contracts (or extensions like the one just announced) in place, there is some risk that there could be hard times for the company in 2016.

The good (or less bad) news for Atwood is that it's a lot less debt burdened than peers like Seadrill and Transocean, and that should give it more flexibility to maneuver the ongoing downturn in drilling. However, long-term investors need to consider that the worst may be yet to come before committing to any action with Atwood's stock just yet.