Whole Foods (NASDAQ:WFM) was the leader in the organic-foods movement in the United States. Recently, because of some company missteps, competition from the likes of Kroger, and general concerns about cost, Whole Foods stock has underperformed the S&P 500 over the past year. 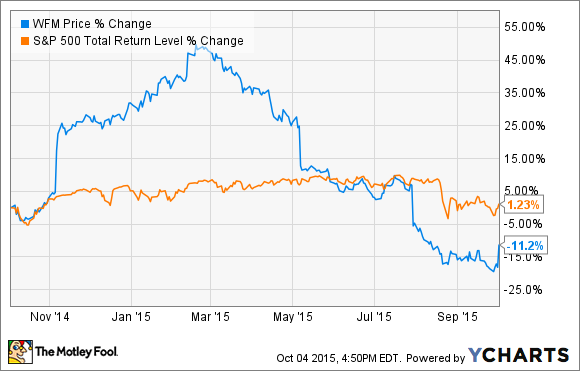 However, there are a number of reasons that I remain bullish on the long-term performance of the company and its stock. At its current valuation, Whole Foods is a strong buy in that its upside potential far outweighs its risks.

Historically cheap valuation for a healthy company
I like to compare current valuations of individual companies to their five-year historical averages. While imperfect, it does allow me to compare apples to apples and can be a good jumping-off point for analysis. A concern is that oftentimes a "compelling" valuation can simply mean a broken company. In the case of Whole Foods, I don't find this to be the case.

Whole Foods is downright cheap when compared with its historical valuations and close to in line with the overall market. Whole Foods is not a broken company, and this valuation presents investors with a compelling opportunity. While not the growth darling that it once was, it continues to grow revenue and EPS while keeping gross margins right around 35%, which is around where they have remained for the past decade.

Return on assets is as high as ever
Return on assets is one measure of managerial efficiency. It's far easier to deliver $1 million of net income off an asset base of $100 million than it is off an asset base of $10 million. Better managers will generally create more earnings than lesser managers when given the same starting position. This is especially important in the grocery business, where margins are historically paper-thin -- Whole Foods is among the highest at nearly 4%, which is more than double that of Kroger.

How many times a management team can turn over a company's assets -- which, in the case of Whole Foods, is fish, steaks, cheese, milk, bread, and all of the other products that its consumers know and love -- is of critical importance. Since 2013, average asset turnover has been over 2.35 every year, putting ROAs consistently over 10. This trend tells me that even amid increased competition, Whole Foods management has been able to preserve its margins and operate as efficiently as it ever has.

It's still relatively small
Whole Foods' name has become so synonymous with organic food and healthy eating that I think many retail investors overestimate its market cap and physical footprint. The company is worth around $11 billion by market cap and currently consists of around 430 stores in North America and the United Kingdom. Kroger sports a market cap more than three times as large. A few years ago, Whole Foods co-CEO John Mackey saw the possibility for more than 1,200 stores in the United States alone.

Whole Foods may still be in the early innings of its global growth story, and I want to stay on board for as long as possible. The world will continue to generally make healthier and more sustainable food choices, and there's a place for Whole Foods to grow with these changes. I don't view this as a winner-take-all situation and think that a company like Kroger might take a sizable portion of the organic-food market. But with a growing overall pie, Whole Foods should be able to weather this temporary stock setback and be a much larger company 10 to 20 years from now.

One nice bonus from the beatdown
Whole Foods' dividend, which was reinstituted in 2011, has traditionally not been a major piece of my investment thesis. This was a growth stock through and through, and while I appreciated the yield I was much more concerned with capital appreciation. Over the past year or so, the yield has crept above 1.5%. 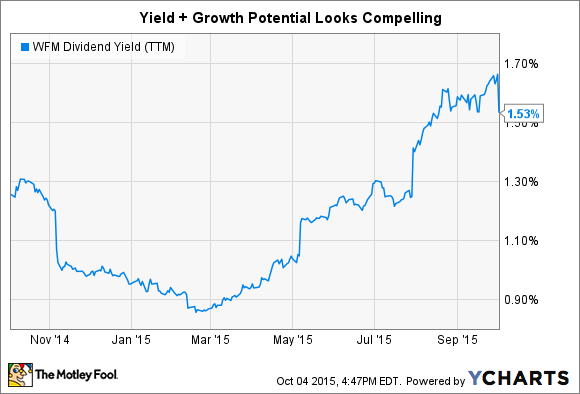 If you believe, as I do, that the stock is poised for a turnaround, then locking in this yield by purchasing today could lead to wonderful returns. Companies with so much growth ahead of them don't often pay dividends and they rarely approach a 2% yield. The board has consistently raised the dividend payout and should continue to do so. Its payout ratio sits around 31%, according to data on Yahoo! Finance, giving it room to grow its dvidend.

Whole Foods has fallen out of favor in the financial media and among the momentum stock traders. The business is still performing, and the valuation is as low as it has been since the depths of the most recent financial crisis. I think the time is now to open a position in this company that has its best days still ahead.