What: Shares of SunPower Corporation (NASDAQ:SPWR) dropped 17% in September despite a booming solar market in the U.S. and abroad. The question is: what's going on with solar stocks right now?

So what: Solar stocks have followed a herd mentality over the past year, and last month's sell-off was no different for SunPower. The company's yieldco, 8point3 Energy Partners, dropped as other energy yield vehicles sold off, despite the fact that it has long-term contracts for the power it makes. 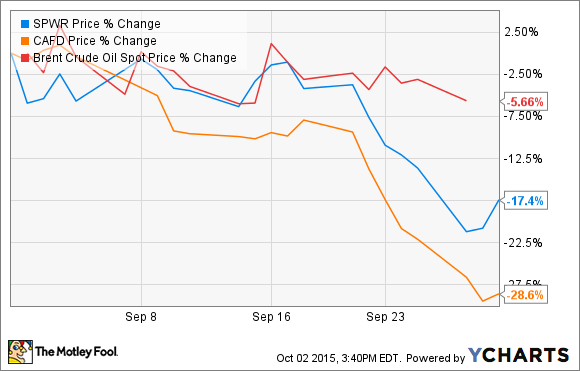 The market is currently afraid that all energy sources are getting cheaper, which will make solar less attractive and sink SunPower's profits.

Now what: Long-term, there wasn't any change in SunPower's prospects -- 8point3 Energy Partners has enough cash to buy the projects it's committed to through the middle of next year, and oil isn't a big competitor to solar in the first place. In fact, analysts have increased SunPower's expected earnings for this year from $1.04 per share to $1.57 per share over the past 90 days. That puts the stock at a P/E ratio of 14 in a growing market. That's a great price for an industry leader as long as you have a long-term horizon.