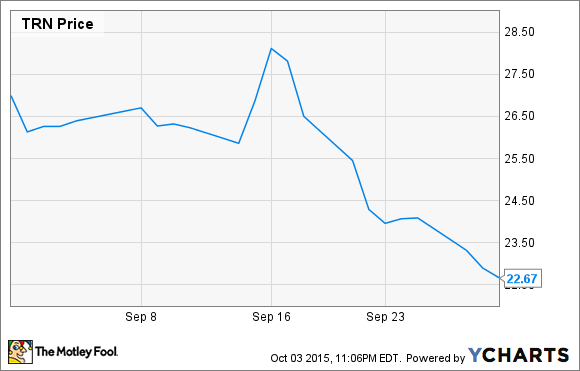 Shares of Trinity Industries (NYSE:TRN), a manufacturer of railcars, barges, construction products, and various energy structures such as wind towers and steel structures for electricity transmission, dove by 16% last month according to data from S&P Capital IQ.

The big issue Trinity shareholders faced last month was a downgrade from Wells Fargo from "outperform" to "market perform." The banking giant also lowered its price target on Trinity by approximately 30%.

According to the research note that went along with the downgrade, the banking giant believes that demand for new railcars will be "moderating" moving forward. It also sees lease rates for railcars being pressured. In order for Wells to once again be bullish on railcar producers it'll need to see better visibility in tank-car demand, a stabilization in lease rates, and an acceleration in freight traffic.

The other issue at hand for Trinity, which builds off of the prior comments, is that commodity prices (especially oil) have been weak. Commodity prices are what encourage drillers and miners to boost production. Without strong commodity prices, the demand to improve rail capacity just isn't there. This puts a major speed bump in Trinity's efforts to sell tank cars, which are the bread and butter margin product for railcar manufacturers since they require more labor and materials than hopper cars.

Between the downgrade and the ongoing weakness in commodities, Trinity Industries simply couldn't catch a break in September.

However, the important question that investors want answered is whether or not Trinity has the tools needed to rebound. In my assessment, I do believe it still holds long-term promise for patient investors.

Trinity Industries' Q2 earnings report tells the tale. Even with a lot of the same market dynamics in place then as we're seeing now, it managed to grow its rail group backlog to $6.9 billion, it raised its full-year EPS guidance to a midpoint of $4.60 from $4.28, and its energy group backlog also surged by more than 25% to $502.6 million.

Although a higher propensity to lease railcars or purchase hopper cars as opposed to tank cars could hurt Trinity's near-term margins, the long-term investing thesis still appears to be intact. The need to ship more goods via rail, be it liquids via tank cars or dry bulk via hopper, should hold true as time passes and the global population grows. An investment in Trinity is a numbers game. You're just betting on a greater need for logistics as the world continues to grow, which seems like a smart bet in my view.

As it stands now, Trinity is sporting a forward P/E of less than six, and it's paying shareholders a dividend yield of roughly 2%. Even assuming some level of margin contraction in future quarters this seems like an attractive price point to consider making an investment. I would certainly encourage value-seeking investors to give Trinity Industries a closer look.