Oil companies take a huge risk when drilling offshore. Not only are operating conditions much more challenging, but actually finding oil is really proving to be easier said than done as the exploration success rate has plunged in recent years. It's why we've seen oil companies like ConocoPhillips (NYSE:COP) abandon offshore drilling exploration plans as the risks aren't proving to be worth the reward, especially when compared to shale drilling.

Success is drying up

Given this backdrop, at a recent industry conference Halliburton (NYSE:HAL) President Jeff Miller spent some time detailing this growing issue within deepwater drilling. He pointed to the following slide and said: 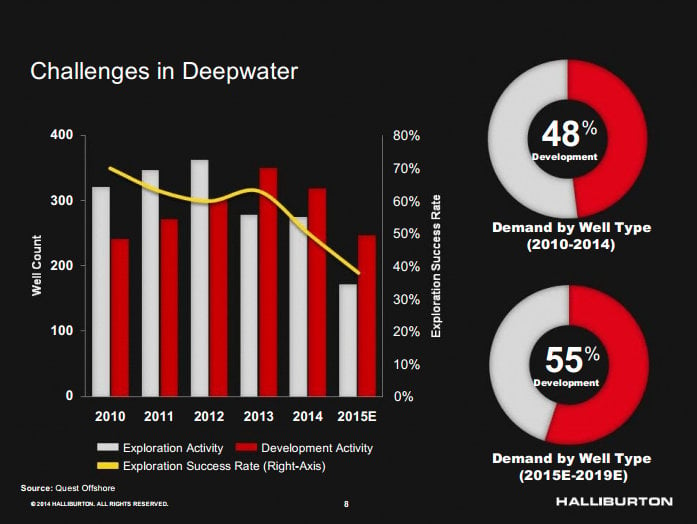 What you see on the slide ... the light bars represent exploration wells, which we can see over time declining ... the red bars are development wells, and so there, we see them declining, but on a relative basis, increasing. And then the yellow line, for deepwater depicts exploration success or the lack thereof. If you take a peek at the circles on the right, what that demonstrates is the change and the quantity or the relative quantity of exploration versus development. And so while activity is declining, there is no question that things are being pushed to the right.

What I want to draw your attention to on that slide is that yellow line, which has declined from more than 70% at the start of the decade to less than 40% this year. Some of this is due to the fact that some of the best prospects were drilled earlier on and now more frontier drilling is being done. Likewise, previously higher oil prices had allowed for more risk taking as drillers had the cash to test out riskier concepts. Still, with the success rate falling so dramatically it is eating into drilling returns as these wells aren't cheap.

Hit and miss
For example, late last year ConocoPhillips announced that its offshore drilling program in Angola had come up dry as one of its exploration wells didn't encounter the commercial hydrocarbons it had hoped. The end result was that the company had to plug and abandon the hole, resulting in it taking a $140 million after-tax impairment charge. Prior to that the company's Coronado prospects in the Gulf of Mexico, which it discovered with Anadarko Petroleum (NYSE:APC), was deemed to be a dry hole after tests suggested that the discovery wasn't as good as initially thought. These misses cost the company a lot of money and are one of the reasons why ConocoPhillips completely abandoned its operated exploration program in the Gulf of Mexico earlier this year.

Having said that, deepwater exploration doesn't have to hit 100% of the time to be deemed a success. Anadarko Petroleum's success rate over the past five years is about 65%. However, that has enabled the company to discover more than 4 billion barrels of oil equivalent. That's an enormous resource base for the company to develop or sell in the years ahead.

Turning discoveries into production
Still, because of how tough exploration has become, and the fact oil prices are much lower now, we're seeing a big shift in how oil companies are looking at offshore resources. One of the other things that Halliburton's Jeff Miller noted in referencing the slide is the fact that oil companies are turning a lot of their focus from exploration drilling to developing the resources they've already uncovered. It's why Halliburton sees 55% of wells drilled over the next five years being development wells as opposed to the previous five years when more exploration wells were drilled. In a sense, what companies are doing is focusing on cashing in on prior discoveries. We see this at Anadarko as it has a number of mega projects in the works that will lead to significant volume and cash flow growth in the years ahead. 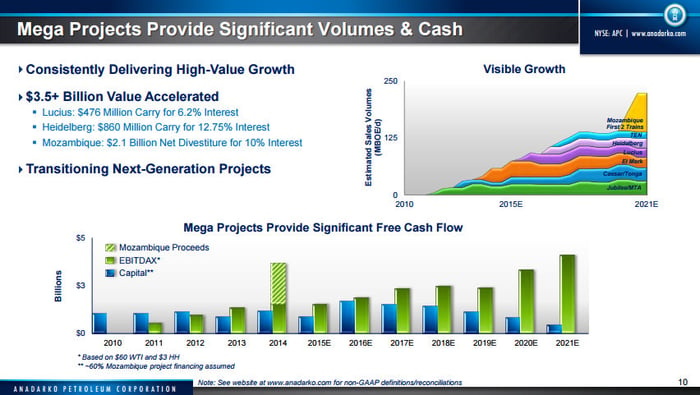 Investor takeaway
These trends suggest a few things. First, it's getting too risky and expensive for oil companies to continue to explore for oil in the deepwaters anywhere near the scale of prior years. That's not the best of news for contract drillers as it suggests a lower workload for the entire sector. On the other hand, oil companies will be turning more of their recent discoveries into production. This could actually lead to better returns for shareholders as oil companies won't be spending so much money drilling dry holes, but instead will turn discoveries into production and cash flow.