Geopolitical risk heats up, while Ben Bernanke gives himself too much credit.

The foreign exchange market, which is driven by macroeconomic data, developments, and forecasts, is well attuned to global affairs. Thus, it's arguably the market that best reflects geopolitical risk.

There little question in my mind that geopolitical risk has increased in the last twenty-four risk due to two developments:

First, Russia has taken its action in Syria to a new level by firing long-range cruise missiles from the Caspian Sea at rebel positions. Add that to incursions by Russian jets into Turkish airspace, and Mr. Putin is most definitely raising eyebrows among Western powers.

Second, we learned yesterday evening that the U.S. is planning to send a warship into the 12-nautical-mile area surrounding China's manmade islands in the South China Sea. China considers this area its territorial waters, but the United States does not recognize that claim. The U.S.' deployment of a surface ship into those waters is a blunt demonstration of the U.S. position and a challenge to China's rising assertiveness in the area.

The combination of these events, which raise the risk barometer, appear to have had no impact whatsoever on the U.S. stock market. What about the currencies market? They're quiet as well. The dollar -- the ultimate safe-haven currency -- is down slightly against the euro, the British pound, the Japanese yen, the Aussie dollar, and the Swiss Franc as of 3:50 p.m. EDT. So much for the worldliness of foreign-exchange traders.

Don't get carried away, Ben

Appearing on Bloomberg Television this morning, former Federal Reserve Chairman Ben Bernanke gave himself a pat on the back for the U.S. economy's performance relative to other industrialized nations, stating:

The U.S. has done much better than any industrial country. Europe is not yet back to the pre-crisis level. What is the main difference between the U.S. and Europe? It took them six years longer to do QE. 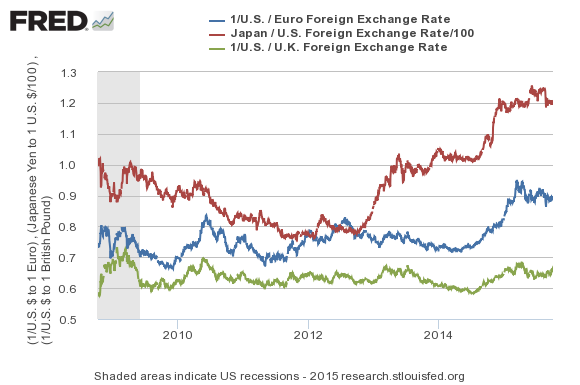 Still, it's a fallacy to focus on policy responses and ignore structural differences between economies. The U.S. economy is structurally more flexible and more dynamic than that of the European Union.

For example, between 2001 and 2003, the U.S. economy recovered from its 2001 recession over the same period it took the eurozone to recover from a much milder slowdown (in fact, the euro area did not go into recession following the implosion of the technology bubble): 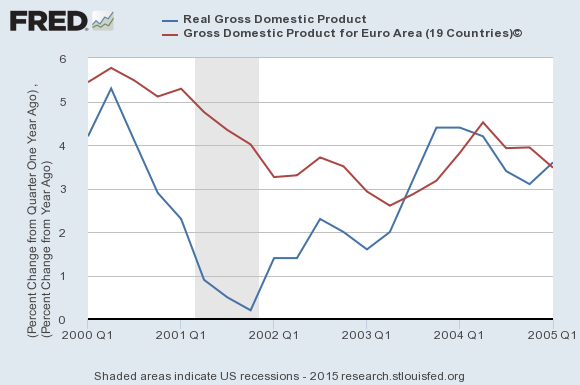 Was that the product of quantitative easing, Mr. Bernanke?