There are tons of different strategies for investing in the stock market. One strategy that has proven itself for hundreds of years, though, is buying stocks that pay generous dividends. The trick to this kind of investing lies in buying stocks that reliably, continuously raise their dividends over several years, and holding on to those stocks through thick and thin.

One sector of the market where you can find some of those generous yields is the energy industry, but it is also an industry that is rife with companies that may not have what it takes to pay the kind of reliable dividends investors crave. So we asked three of our energy contributors to share a company they see as one of the most reliable dividend stocks you can buy. Here's what they had to say.

Jason Hall
National Oilwell Varco (NYSE:NOV) is one of the most important suppliers of drilling equipment and parts for the oil and gas industry, and the downturn has weighed heavily on the company's business over the past year: 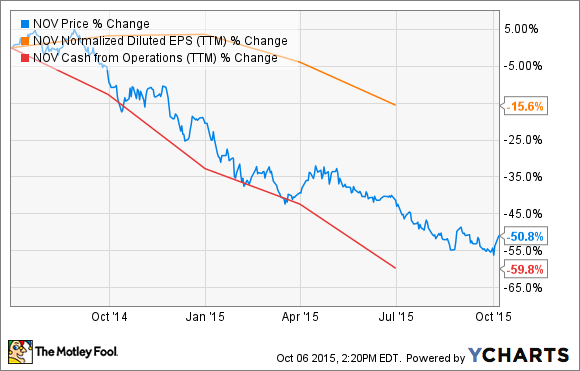 And considering that there's no clear end in sight to low oil prices, National Oilwell Varco's most important businesses -- which revolve around drilling rigs for offshore and onshore, and the replacement parts to keep them maintained and running -- are likely to continue dealing with weak demand.

But even with the ongoing malaise, the company's dividend is one of a handful in the energy sector that's rock-solid.

National Oilwell Varco is in a relatively strong position to ride out the downturn. Even with uncertain business prospects in the short-term, the company continues to generate plenty of cash: 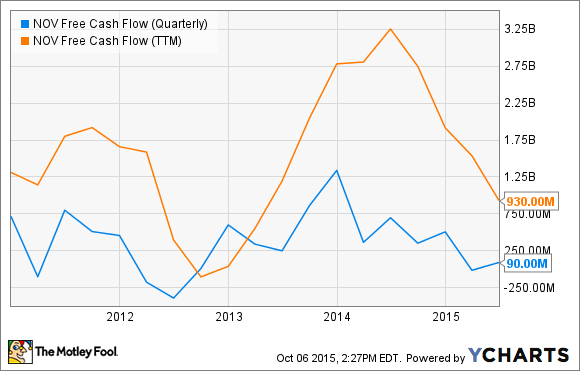 CEO Clay Williams is new to the captain's seat, but he has so far proven to be an excellent capital allocator, and focused the company on cost containment as the downturn plays out. The company has also reduced its share count more than 10% over the past year, meaning the dividend costs that much less to maintain.

All things considered, National Oilwell Varco's dividend (yielding almost 5% at recent prices) is one that income investors shouldn't pass up.

Matt DiLallo
On ConocoPhillips' (NYSE:COP) second-quarter conference call, CEO Ryan Lance pounded the table on the long-term viability of the company's dividend. He led off his prepared comments with the following proclamation: "The dividend is safe. Let me repeat that. The dividend is safe." Furthermore, to put an action behind those words, the company increased the dividend by a penny per share because, according to Lance, "While every dollar matters, we believe this was an important message for our shareholders."

In other words, ConocoPhillips firmly believes that its dividend is rock-solid despite the fact that oil prices are half of what they once were. That's largely because the company has access to a lot of low-cost oil resources as well as the fact that it will finish up its current expansion plan in 2017. That will leave the company with an abundance of cash flow so that it can fund its dividend and maintain its production even if oil remains stuck at around $60 per barrel over the long-term. 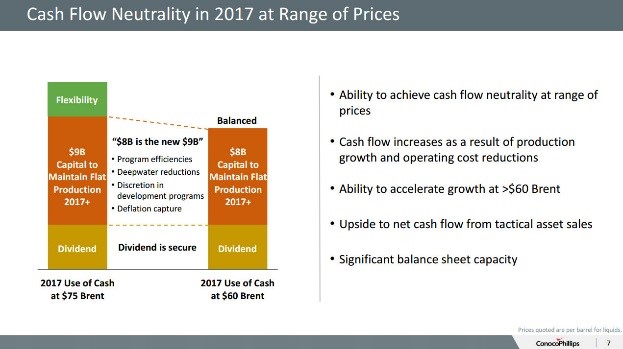 Another reason ConocoPhillips is so confident in its ability to maintain its dividend is the fact that its costs have fallen so rapidly over the past year. It wasn't all that long ago that the company thought it would need to invest $11 billion per year just to maintain its production. Now, that number looks to fall to as low as $8 billion due to efficiency gains, cost savings from suppliers, and deflation. That's enabling the company to produce just as much oil these days for a lot less money, leaving it with more cash flow to maintain its dividend.

The bottom line is that ConocoPhillips' dividend is rock-solid. Not only has the company made maintaining it a top priority, but that is becoming much easier to do as its cost are falling.

Tyler Crowe
One of the biggest challenges for investors in the energy space is to find companies that can pay out dividends quarter after quarter without being compromised by the swing of commodity prices. One way to do this is look for companies for which commodity prices don't matter as much. That is why a company like Magellan Midstream Partners (NYSE:MMP) makes for a rock-solid dividend investment, so little of its business is dictated by the price of commodities. 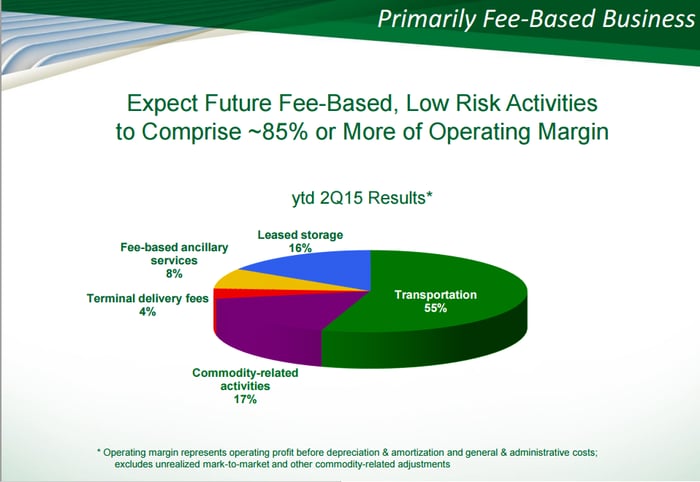 With around 85% of its operating margin coming from fixed-fee use of its pipelines and storage terminals, Magellan's business keeps on churning out cash during all commodity-price environments.

The other element that makes Magellan's dividend (actually a distribution, since it's a master limited partnership) so secure is that unlike other MLPs, it isn't under pressure from a parent company to give back as much cash as possible. Rather, the company keeps a rather conservative payout scheme whereby it retains a decent amount of cash in the business each quarter to fund organic growth. This growth through internally sourced cash flow also keeps the company from needing to issue new equity to fund projects and less shareholder dilution, unlike other MLPs that are beholden to the cash demands of parent companies. 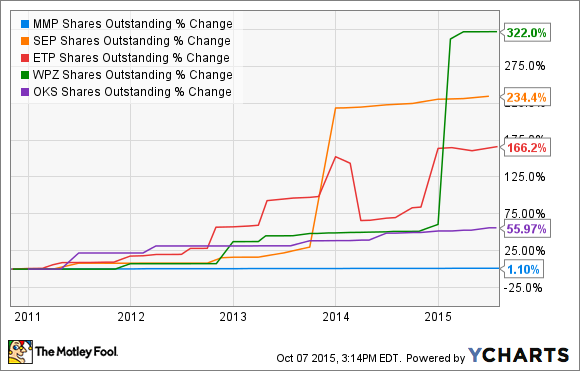 Magellan isn't one of those companies that will blow anyone away with gaudy growth numbers or a backlog of projects in the several-billion-dollar range like some other MLPs. That's OK, though, since its high rate of fee-based services and its conservative approach to growth and capital allocation make it one of the most dependable dividends in the energy industry.