Please ensure Javascript is enabled for purposes of website accessibility
Log In Help Join The Motley Fool
Free Article Join Over 1 Million Premium Members And Get More In-Depth Stock Guidance and Research
By Anders Bylund - Oct 11, 2015 at 8:59AM

The mixed-signal semiconductor specialist looks for its next major buyout while the ink is still drying on the last one. Investors are nervous about this deal hunger. 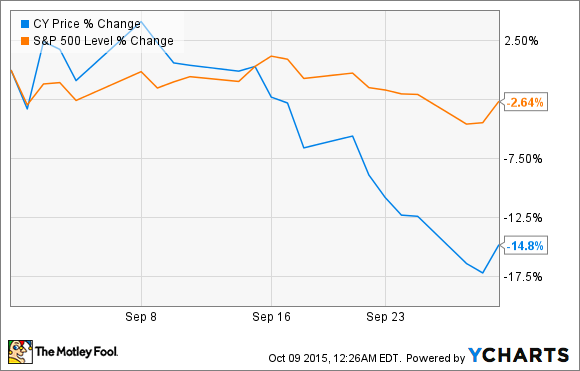 What: Shares of Cypress Semiconductor (CY) fell 14.8% in September, according to data from S&P Capital IQ. The mixed-signal semiconductor maker is flush with cash and looking for strategic buyouts, but those expansion efforts aren't working out as planned right now.

Now what: That's hardly the end of Cypress' buyout ambitions, of course. Near the end of September, the company reportedly cooked up a bid for far larger sector peer Atmel --only to deep-six that idea when Atmel didn't embrace that bid. That company is knee-deep in merging with another rival, of course, which put some additional roadblocks in front of the Cypress alternative.

The ISSI target is still up in the air, though. Cypress has sweetened its bid to $22.25 per ISSI share, valuing the target company at $712 million. And the company is still digesting the $5 billion all-stock merger with Spansion, which was completed in March.

Thanks to the Spansion deal, Cypress has doubled its market cap over the last 52 weeks even though shares prices are down 3.6%. That's the dilutive effect of large stock-based buyouts in a nutshell.

The refreshed ISSI offer and a plethora of new product introductions have lifted Cypress shares in October. The stock traded 9.7% higher across the first six trading days of the new month. Whether the ISSI bid works out or not, Cypress is most certainly hungry for growth by acquisition, and would most likely simply find another target if this idea comes up short. The bouncing share prices might help if Cypress goes for another stock-powered deal.