Bio-engineered products could be more sustainable and better for you than their competitors.

What if the key components in your perfume could be grown in a lab rather than being found in a rare oasis in Australia? What if your beauty cream was grown from yeast rather than being extracted from plants that could be used to feed the world? And what if your cooking oil could be made from algae, and be healthier for you than alternatives?

These aren't just hypothetical today. They're reality, and they're coming from technology that Amyris (AMRS 4.32%) and Solazyme (TVIA) have been working on for years to develop.

Creating a custom product from scratch
Originally, both Amyris and Solazyme sold themselves to investors as a biofuels play that could potentially add value to other products. But they've both realized that their only way to profitability is to create high-value products for niche markets that add more value than they could ever add in the commodity-fuel market.

Amyris made the transition first, and has launched the cosmetic product Biossance, and the cleaner Muck Daddy for consumer markets. A third unique fermentation product was recently produced from the company's industrial facility in Brotas, Brazil, and is being shipped to partners in the fragrance industry. It has also partnered with the pharmacy industry to develop engineered products; so the world of high-value products is just opening up for Amyris.

While Amyris uses yeast to create engineered products, Solazyme uses algae. Like Amyris, it's transitioning away from products like fuels to higher value-added products in personal care and industrial applications. A recently announced product called Thrive is a culinary algae oil. The product has less saturated fat than olive, canola, and coconut oil, and has less taste, as well.

There are certainly a lot of exciting products in the pipeline for both companies that will probably end up on store shelves near you. There's just one big challenge ahead.

Can bioengineering make money?
The biggest problem Amyris and Solazyme have had is making money. You can see below that both companies have been bleeding cash since they became public companies. 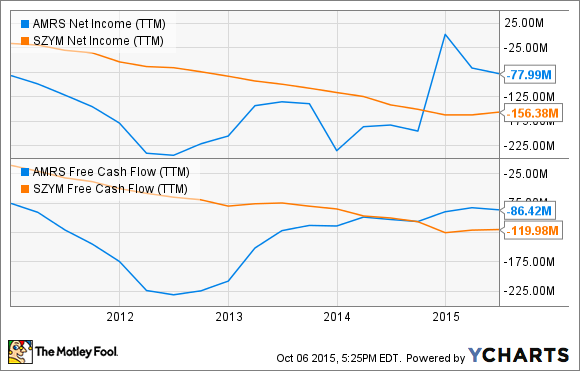 One piece of that picture is falling costs and Amyris is making major strides on the cost side of the equation. Farnesene production cost were about $12 per liter as recently as early 2013, and Monday it was announced that September 2015 farnesene production was just $1.75 per liter. Rapidly falling costs will allow for better margins as well as more sales opportunities for lower price products.

The hope for investors is that Amyris and Solazyme will both start turning the corner financially in the second half of 2015 and into 2016. The products above will need to play a big role in that.

What to watch for
Investors should watch for product revenue growth in the second half of 2015, and margins, as well. Both companies are ramping up production, and should be ironing out kinks related to manufacturing start-up.

If they can be successful with newly launched products and lower costs, there could be a huge upside opportunity for both companies.

Can the U.S. Military Afford to Run on Biofuels?