While the field of synthetic biology has the potential to revolutionize industries ranging from health care to chemical manufacturing, it's been a rough road for investors in the first wave of companies. That's especially true for shareholders of Amyris (NASDAQ:AMRS), which soared to a $1.4 billion market cap shortly after its IPO and then promptly face planted. A combination of hubris, background noise in laboratory data, and an initial focus on renewable fuels created enough technical and financial challenges to rightfully scare most investors (including myself) away before the stock's first anniversary. 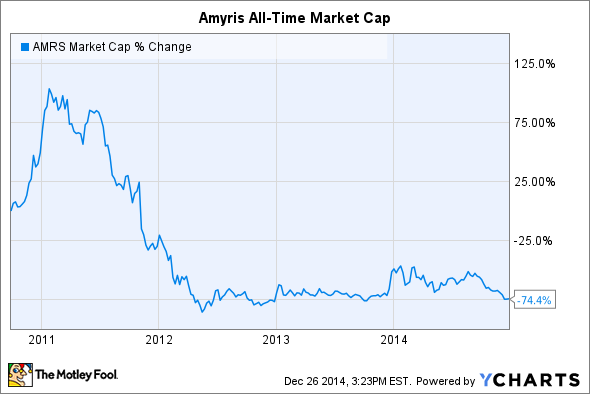 Today is different. In the past three years Amyris has adjusted its ambitions, developed tools to speed research and development, and refocused on more profitable renewable products and markets that it has taken the time to better understand. To me, it appears that most investors and analysts have yet to pick up on the improvements, which creates a unique opportunity for long-term investors willing to take a closer look. It may be difficult to believe, especially for a company that announced a going-concern as recently as May 2014, but Amyris is my favorite stock to buy in 2015. Here's why.

What does Amyris do?
Amyris engineers yeast to produce commercial quantities of valuable chemicals through large-scale fermentation, similar to brewing beer. The chemicals produced have applications in cosmetics, flavors and fragrances, performance materials, fuels, and lubricants. But there's a catch: Fermentation products, also called innovator molecules, are produced directly from engineered yeast strains, while derivative molecules are created by processing innovator molecules after fermentation has taken place.

For instance, the company's flagship innovator molecule is the renewable hydrocarbon farnesene. While it can be used "as is" in several applications such as tire manufacturing, it can also be converted downstream into valuable derivative molecules including: Collaboration partners pay Amyris for reaching specific development milestones, thereby funding research and development, and then become customers once chemicals are produced commercially. Several customers of specialty ingredients (flavor and fragrance products) also pay Amyris a percentage of the difference between production costs and market prices of traditional supply sources, which ensures both customer and technology owner share in the benefit.

Compounding science driving upcoming catalysts
Producing innovator molecules such as farnesene that double as building block chemicals enables research and development efforts to be compounded throughout Amyris' product portfolio. Consider two partners: Total SA and Takasago. The first is interested in diesel and jet fuels, while the latter is interested in flavor and fragrance molecules. Despite diverse goals, when Total develops a new yeast strain that lowers farnesene production costs, Takasago shares in the benefit.

While multiple innovator molecules are being targeted (farnesene and patchouli as two current examples), the approach allows Amyris to produce dozens of chemicals while only focusing on optimizing a handful of fermentation processes -- arguably the most challenging part of production. The value of the approach has been demonstrated each time the company has introduced a next-generation yeast strain for farnesene production.

When combined with strategic collaboration revenue streams and market development activities, farnesene production costs below $3 per liter open a wealth of opportunities for Amyris and investors heading into 2015. Lower production costs allow more products to be sold at a profit, which justifies larger overall production volumes. Indeed, the company expects to introduce six new products next year that will generate approximately $20 million to $30 million in revenue. Existing products will contribute approximately $10 million to $15 million in revenue growth in 2015 on higher volumes.

The company's sole manufacturing facility in Brotas, Brazil, is now operating at an annual sales run rate of $40 million, which will continue for the first half of 2015 before ramping to an annual run rate of $80 million in the second half of next year. That would generate approximately $60 million in renewable product revenue for the year, compared to $30 million (expected) in 2014 and $15 million in 2013.

Granted, $60 million in product revenue isn't exactly mind-blowing, but falling production costs will give way to manufacturing expansion in the near future. A joint venture with Brazilian sugarcane producer Sao Martinho will add two manufacturing facilities each twice the size of Brotas. The first is already half-completed -- construction was halted when the sky was falling in early 2012 -- and must begin operations by the end of the first quarter 2017. Tire manufacturers are expected to help fund its completion and purchase nearly all of its output. The second has yet to be constructed, but must begin operations by the second quarter of 2019. In all, the three facilities would give Amyris $1 billion in annual sales potential by the end of this decade if its molecule portfolio develops on schedule.

Lower production costs also put the company one step closer to realizing its targeted gross margin range of 50% to 60% for its overall product portfolio. Brotas likely won't enable those margins for several years until more high value flavor and fragrance molecules are added to the mix, but investors should be encouraged that the third quarter of 2014 was Amyris' first ever with positive gross margin. Of course, while lowering production costs plays a big role in enabling profitable operations, lowering overall operating expenses goes a long way, too. Amyris has made great strides in reducing its selling, general, and administrative and research and development expenses in recent years, which has resulted in greatly reduced losses.

Once again, a net loss of nearly $56 million through the first nine months of 2014 doesn't stoke the flames of confidence in investors, but operating expenses have now fallen to levels that, when coupled with the momentum in production, could enable cash flow positive operations in 2015. Amyris could realize companywide profits if Brotas reaches an annual revenue run rate of $160 million, which is possible by the end of 2016 -- around the same time its second facility will come online.

Not all smooth sailing
As with all investments, there are pros and cons to being an Amyris shareholder. The largest red flag continues to be the company's large amount of debt. Total liabilities weighed in at $439 million at the close of the third quarter of 2014, which included nearly $230 million in debt. While not ideal and most certainly dilutive, 75% of the company's debt is in the form of convertible notes held by leading shareholders such as Total SA and development banks in Brazil, which are aligned with the company's success. However you view the debt, there's more on the way in 2015. Amyris had just $67 million in cash at the end of September, which makes additional financing necessary for ongoing operations to continue. In addition to funding ongoing operations, the two large-scale manufacturing facilities slated for completion will need significant upfront investments to build and ramp to steady state production. Although the company can probably extract more favorable terms for future debt rounds considering the progress made in lowering production costs, exercising cash discipline, and expanding its product portfolio; piling on more debt to an already sizable amount will dampen enthusiasm.

What does it mean for investors?
Amyris is my favorite stock to buy in 2015 because of its rapidly improving operations derived from falling production costs and expanding market potential, which are beginning to drive multiple opportunities for sustained, long-term growth. In 2015, product revenue is expected to double for the second consecutive year and the company is expected to achieve positive cash flow from operations. Should the company realize profitable operations in 2016 from production at Brotas alone, Amyris and partners could confidently deploy the technology platform worldwide, thereby allowing investors to finally realize the technology's true potential.

Make no mistake about it: Amyris is a long-term, buy-and-hold investment; not an overnight get-rich-quick scheme. But I believe many of the pieces are already in place for substantial growth in the next few years. Given the momentum, it appears likely that investors' attitudes will begin to shift in 2015, from being preoccupied with concerns over the feasibility of the technology to the pace of growth. Opportunistic investors that can stomach near-term volatility may be handsomely rewarded in the long run.