There's no greater motivator than money. If a distribution platform wants to attract top content, the best way to get it is by paying for it. For a long time, platforms such as YouTube, Twitter (NYSE:TWTR), and Facebook (NASDAQ:FB) have attracted tons of content without having to pay a dime for it, but YouTube has recently made more efforts to attract better video content by offering revenue splits from pre-roll ads and offering exclusive contracts to some its top creators. That's especially important in light of new competition in video from Facebook and Twitter.

Twitter recently announced that it's expanding its Amplify video advertising program to make it easier for advertisers to show pre-roll ads on video content. More importantly, the new program makes it extremely easy for publishers to monetize the videos they upload to Twitter. Facebook, meanwhile, still offers no compensation for uploading videos to its platform. 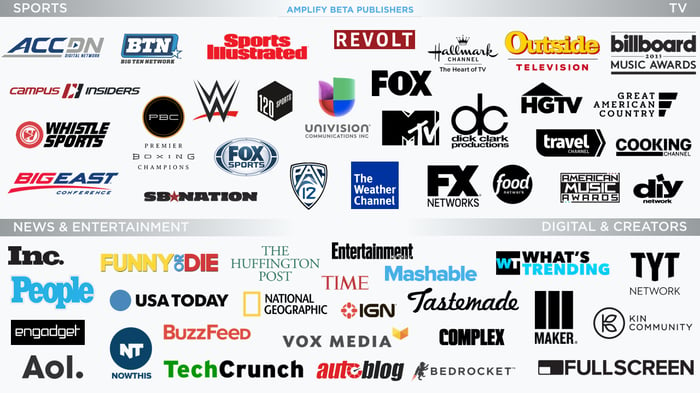 Why the expansion was necessary
Twitter's Amplify program started about 18 months ago. Advertisers would have to find a piece of video content on Twitter, contact the publisher directly, and promote that tweet (with the pre-roll ad) through Twitter. This is clearly a cumbersome task, but to belabor the inefficiencies, 80% of Twitter video views happen within the first five minutes of a tweet. As a result, advertisers missed out on a lot of organic reach -- i.e., people who voluntarily want to see this content -- and publishers (and Twitter) missed out on a lot of potential ad revenue.

The revamped program enables pre-roll ads to be inserted programmatically as a publisher tweets out a video. Advertisers just tell Twitter what kind of content they want their ads displayed against, publishers opt into the Amplify program, and Twitter takes care of the rest. This approach makes it easy to reach and monetize those 80% of views that happen in the first five minutes, and it makes it easy to receive compensation for video content uploaded to the network.

Twitter will reportedly give publishers 70% of all ad revenue generated against their content. This rate is in line with other display advertising found on Facebook's Instant Articles and Alphabet's AdSense ads, and it's significantly better than YouTube's 55/45 split. That amount may encourage publishers to post videos to Twitter first, instead of YouTube, to maximize the value of their content. That behavior will reinforce Twitter's position as the real-time information network.

Moreover, making it easier for publishers to monetize their videos will encourage them to upload more of them. Acquiring more quality video content will lend to the success of Moments, which focuses heavily on media like videos and photos. Twitter is betting heavily on Moments to engage new users and encourage inactive users to become active again.

Facebook's plans to compete
Facebook rapidly built up video views on its platform from 1 billion per day to 4 billion in about six months, but management hasn't given us an update since the beginning of the year. What's more, the quality of video on the platform is severely lacking. The NFL notably neglected to renew its content deal with the social network despite renewing deals with Twitter and YouTube and starting a contract with Snapchat.

But Facebook reportedly plans to develop some form of revenue sharing for select publishers. Advertising against videos will reportedly involve a suggested-videos feed that includes ads between publishers' videos. Revenue will be split based on watch time for each video.

Facebook is hesitant to include pre-roll ads in its video content like Twitter and YouTube. The initial thought is that including an ad ahead of videos will prevent users from engaging with videos they otherwise might have. However, Twitter has been displaying videos in the same way as Facebook -- automatically playing them as a user scrolls past -- and its limited test with pre-roll ads was good enough to merit expanding the program.

Facebook may have to consider pre-roll ads to appropriately compensate its video creators and monetize the growing video views on its platform. Whatever it does, it had better figure it out quickly. Twitter's move makes it significantly more appealing for initial video publications, and Facebook risks losing out on valuable content.