The data analytics provider was unable to shake off a stock price slump that began in midsummer.

What: Shares of Tableau Software, (DATA) fell 15.3% during the month of September, according to S&P Capital I.Q. data.

So what: The provider of Big Data analytical software continued in a trend that can be traced to the end of July, when the company released disappointing second-quarter 2015 earnings.

While revenue in the reported quarter expanded 65% from the prior year, it apparently wasn't enough to justify the increasingly high valuation, which supported the stock in the first half of 2015: 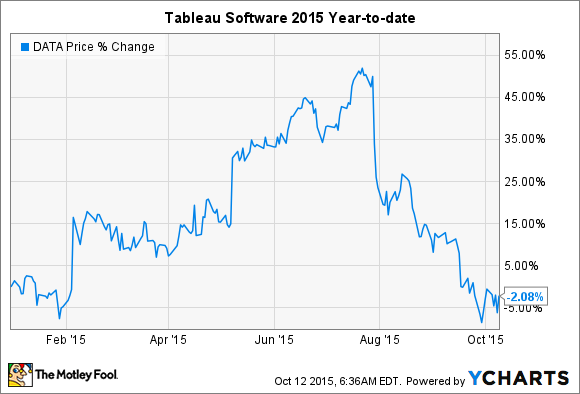 That the "DATA" ticker is still tracking south reveals shareholder concerns about the rate of revenue growth, as well as potentially intensifying competition from analytics rival Qlik Technologies. Recently, analysts have pointed out a perception among some corporations that Qlik's suite of products, though higher priced than Tableau's, may produce a higher return on the technology dollars invested.

Stiffening competition may mean that even when accounting for Tableau's admirable revenue growth capabilities, it won't soon gain a tremendous amount of operating leverage, which translates into profitability. Tableau is still posting operational losses: Last quarter, the company lost nearly $19 million on revenue of $150 million.

Now what: Tableau's stock has certainly taken a beating over the summer and into the fall. But the total retracement from a 50% gain in the first half of the year doesn't necessarily indicate that investors should rush in. Tableau is still priced quite steeply as a multiple of its projected earnings growth. The company currently sells at 6.3 times its forward five-year PEG, or price-to-earnings growth ratio.

While growing tech companies typically trade above a traditional PEG yardstick, where companies with below 1.0 are said to be undervalued, and those above over 1.0 are conversely overvalued, this is still a rich valuation.

The takeaway may be that after fiscal Q2 2015, investors want to see either even faster top-line growth or evidence that Tableau is beginning to convert some of that revenue capability into higher profitability. Rising above revenue or earnings expectations in Q3 may or may not help Tableau's stock price, but a miss on either front could spell further downside, as investors are eyeing this stock with more skepticism as 2015 wears on.

Asit Sharma has no position in any stocks mentioned. The Motley Fool recommends Qlik Technologies. Try any of our Foolish newsletter services free for 30 days. We Fools may not all hold the same opinions, but we all believe that considering a diverse range of insights makes us better investors. The Motley Fool has a disclosure policy.