Consolidation has been commonplace in the beer industry for well over a decade now. Busch, Budweiser, Miller, Coors, and many smaller brewers have been acquired or merged to create the behemoths of the industry we know today, led by Anheuser-Busch InBev (NYSE:BUD) and SABMiller Plc. Now, the world's two largest brewers are talking about combining in a move that would change the beer industry forever.

What's amazing is that either of these brewers would want to get bigger in the first place. But in a lot of ways, the merger would make a lot of sense for both companies.

Synergies
Mergers are often justified with synergies of combining companies. Overhead operations, distribution, manufacturing, and purchasing can leverage size to squeeze more profit from a business. In the past, beer mergers were justified with these kind of cost savings. But at the current operating scale of AB InBev and SAB Miller, there wouldn't be a lot of operational cost savings in making beer at an even larger scale. Here are specific synergies that make this a great deal for both companies.

Advertising and sales costs would be where both companies could save money, and there's a lot of money involved. Of every dollar in revenue for AB InBev in the second quarter of 2015, 15.9 cents was spent on sales and marketing. The only line item on the income statement that was bigger was the 40.4% of revenue that was spent actually making beer. Advertising costs are also growing faster than revenue, which is bad for any business. 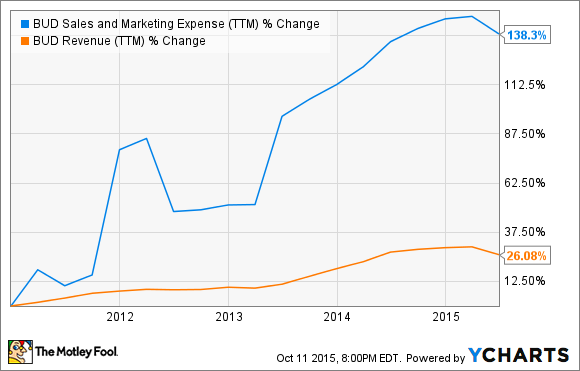 Ironically, AB InBev and SABMiller are often fighting each other for commercial airtime. Combined, the companies are on pace to spend about $8.4 billion on sales and marketing in 2015 (Note: SABMiller doesn't break out administrative costs from SG&A), and combining their ad-buying could create significant savings.

That savings could be more important than ever given the trends in beer drinking. MillerCoors' volumes are down 1.9% this year, and AB InBev's volumes are down 1.7%, so they're looking for any way to cut costs, and advertising is the obvious answer.

Pricing power matters
That brings me to the other big reason AB InBev and SABMiller would make a lot of sense together: pricing power.

With the decline in volume I noted above, the only reason the companies saw revenue and net income rise in the first half of this year is higher prices.

If there was no competition from each other, a combined AB InBev and SAB Miller could slowly inch up prices, raising revenue and profits even if the volumes it sells continues to decline. As separate companies, they're in competition with price being a big decision factor for consumers differentiating two very similar products.

A merger that makes sense, but probably won't happen
Financially, a merger of AB InBev and SAB Miller makes a lot of sense given the billions they could save on advertising and the added pricing power the larger company would have, but that doesn't mean it will or should happen. It would definitely come under regulatory heat, and customers could revolt as well, something we've seen with volumes falling for big brewers and rising for craft brewers.

But it's also important for investors to understand why a merger may happen, and why it would make sense. In this case, it doesn't have anything to do with making beer cheaper or better, it's about saving money on advertising and potentially squeezing more dollars out of customers. Those are the real drivers of merger mania in the beer industry.