A pair of big IT contracts could help pull ManTech's stock out of the e-dumps. 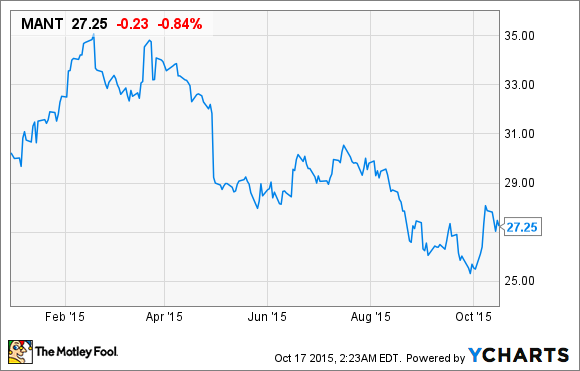 ManTech shares have performed pretty poorly so far this year -- but perhaps not for much longer. MANT data by YCharts.

In the aquarium of gigantic defense-contracting sharks, ManTech International (MANT 0.27%) is a bit of a minnow.

Valued at just $1 billion, and doing just $1.6 billion in business annually, ManTech is one of just a handful of defense contractors that are both (a) publicly traded and (b) not trading in the large-cap range for market capitalization. And yet, last week ManTech won new government contracts from the Pentagon that have the potential to catapult it into the big leagues.

Christmas comes early for ManTech
The first of these contracts, announced on Oct. 7, awarded ManTech $250 million to provide "cyber range services" to the Defense Information Systems Agency and United States Marine Corps. A cyber range is the electronic equivalent of a shooting range for firearms -- a controlled environment in which Marines and security professionals can practice the use of cyber weapons, operations and tactics, honing their skills against the day when they will be called upon to use them to repel (or conduct) a cyber attack.

The two days of Christmas
One day after the DISA/USMC contract was announced, ManTech revealed on Oct. 8 that it has also won a spot under a much larger umbrella contract known as "E-SITE," short for Enhanced Solutions for Information Technology Enterprise.

This five-year contract, worth $6 billion potentially, comes under the ambit of the Defense Intelligence Agency (DIA, as distinct from DISA, above). Under this contract, ManTech will be bidding against as many as 49 other awardees to fulfill task orders "for IT requirements and technical support services for DIA and other members of the Intelligence Community." The total value of all task orders awarded will make up the $6 billion ceiling value of the E-SITE contract.

ManTech is thus not guaranteed to win all of E-SITE work -- or indeed much of it. And ManTech faces some stiff competition for the task orders, with defense contracting heavyweights such as Boeing, Booz Allen, and General Dynamics all competing for the same work. But as the prime contractor under the long-term contract that E-SITE is replacing, ManTech would seem well-placed to win a good chunk of the E-SITE work nonetheless.

What does it mean for ManTech?
Focusing on the cyber range contract alone, the potential $250 million value of that contract is worth about 15.5% of what ManTech ordinarily brings in as revenue over a full year. Even read in the most conservative light -- $250 million over four years would be $62.5 million in revenues per year -- this contract promises to grow ManTech's business by nearly 4% annually over the next four years. That's half the 8% long-term earnings growth rate that ManTech is pegged for on S&P Capital IQ -- meaning, essentially, that half of ManTech's hoped-for growth over the next several years is already "in the bag," so to speak.

Add in the even bigger revenue opportunity from ManTech's participation in E-SITE, and it's not hard to see ManTech's future looking very bright indeed. With the stock currently trading for 19 times earnings -- and for less than 10 times free cash flow -- before these new revenues start flowing, the future is looking pretty bright for ManTech shareholders as well.