Bank of America's goal is to earn 1% on its assets.

On Bank of America's ( BAC 0.64% ) quarterly conference call last week, Chairman and CEO Brian Moynihan observed that the bank "continue[s] to make progress toward [its] full-year earnings capacity." Knowing what Moynihan means by this is important, because the answer helps determine whether the $2.2 trillion bank's shares are under- or over-valued.

All things considered, Bank of America turned in a respectable performance in the three months ended Sept. 30, earning $4.5 billion compared to a loss of $232 million in the same quarter last year. More importantly, it marked the first time since the financial crisis that the Charlotte, North Carolina-based bank has reported four consecutive quarters of solid profits.

"When you think about it over the last four quarters, we've reported over $16 billion in after-tax income," noted Moynihan on the call with analysts. "That compares to the previous four quarters leading up to the third quarter of 2014 of about $5.2 billion."

Despite the fact that Bank of America is headed in the right direction, however, it's still not where it wants to be. You can see this by looking at its return on assets, the principal profitability metric used to assess bank performance. In the third quarter, Bank of America generated a 0.82% return on assets. This means that its quarterly net income, multiplied by four in order to annualize it, equated to only 0.82% of its total assets. 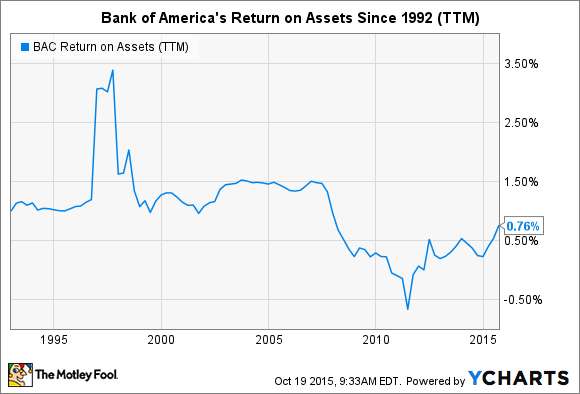 This isn't good by any stretch of the imagination, but it's certainly better than the many quarters over the past seven years in which the bank reported losses. At the same time, however, Bank of America has set its sights on a higher benchmark. Moynihan has said in the past that the bank's goal is to return 1% on its assets.

This is a good goal, as a 1% return on assets has long been presumed to separate the industry's best-run banks from the pack. And, for the record, this isn't coincidental, as it translates roughly into a 10% return on equity, which, in turn, is the typical bank's cost of capital. Earn a return in excess to that, and a bank is said to create value. Come up short, and value is destroyed.

So, how close is Bank of America to meeting this rough estimate of its full earnings capacity? With $2.15 trillion in assets, the bank must earn roughly $22 billion a year in after tax earnings to do so. That equates to a 36% increase over the $16 billion that it's earned over the past four quarters.

How does it plan on bridging the remaining divide? The answer is twofold, according to its presentation at the Barclays Global Financial Services conference in September:

The good news is that Bank of America is in striking distance of a complete recovery, evidenced by its improved profitability. But the bad news is that its ability to reach its own definition of "full earnings capacity" is predicated heavily on the direction of interest rates, something it has no control over.