It's hard to blame anyone that has lost all faith in the oil market over the past year. Even solid companies such as Core Laboratories (NYSE:CLB) have seen shares plummet to levels we haven't seen for years. For those that have hung on, any sign that prospects are about to turn could give share prices a pretty hefty boost. In the case of Core, there is one sign that investors should watch closely: revenue. Let's take a look at why other elements like earnings and margins appear to be taking care of themselves in this decline and why the one thing you should be watching when Core reports quarterly results on Sept. 22 is that revenue number.

Resilient earnings results thus far
One thing that you always need to keep in mind when looking at oil services stocks is that their prospects are very much dictated by the spending decisions of oil and gas producers. So, over the past year as capital expenditures have dried up, you have to expect that revenue at these companies would take a hit. When you compare Core Labs to many of its peers, its revenue declines are pretty much in line with what we have seen at the other major oil services companies such as Schlumberger (NYSE:SLB), Halliburton (NYSE:HAL), Baker Hughes (NYSE:BHI), and National Oilwell Varco (NYSE:NOV) 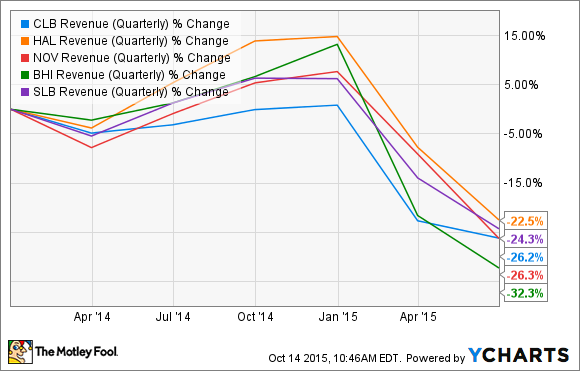 What revenue declines don't necessarily mean, though, is that a company's profitability needs to get hit. A big test for oil services companies during this downturn is the ability to preserve their margins though both cuts to operational expenses as well as maintaining some form of pricing power on its services to the oil and gas industry. This is one aspect where Core has outperformed many of its peers. Despite seeing similar declines in revenue, the company has been able to maintain an EBITDA margin well above 20% and a net income margin above 15%. The only company that has come close to that level of margin preservation is Schlumberger. 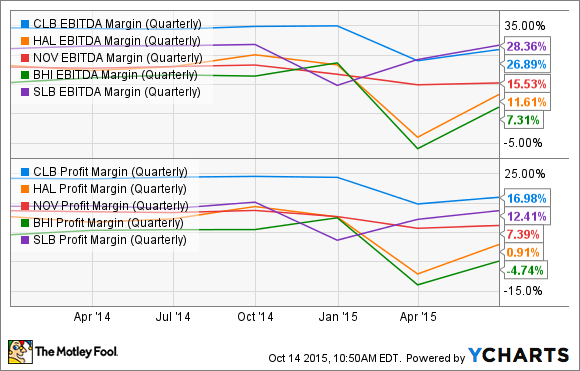 There are a couple reasons that this is possible for Core. One is that it doesn't have the fixed costs that so many other oil services companies do. Without having to have large drilling crews like a Halliburton or the manufacturing facilities like a National Oilwell Varco, Core can more readily cut its operational expenses to adjust for the times.

Another major reason it can preserve margins is that many of its services are considered value-add services to producers. Most of the work performed by Core is done to improve well economics and allow producers to get every last possible barrel of oil from a well. Unlike more generic services such as pressure pumping where work will go to the lowest bidder, deciding not to use Core's reservoir analysis can result in a higher cost per barrel, so companies are willing to pay up for its services.

While it's entirely possible that we could see another dip in earnings this quarter, chances are Core will be able to maintain a respectable level of profitability provided it can deliver on one promise it made last quarter: increased revenue.

A revenue rebound
Over the past two quarters, Core's management has been pretty good at predicting the future. During its first quarter conference call, CEO David Demshur said that this was likely to be the weakest quarter in terms of margins because it hadn't fully implemented all of its cost cutting measures. By the time the second quarter rolled around, margins had started to improve. Then, during that second quarter conference call, Demshur stated that the second quarter would be the company's bottom in terms of revenue and that this quarter we would start to see some improved revenue numbers.

Part of the reason those comments were made were twofold. The first was that the company is seeing increased market penetration for its new technologies. Even though companies are consolidating the amount of projects, but the ones they are working on and the ones that are already in operation are using more of Core's products and services to improve well economics. The recent acquisition of Sanchez Technologies will also help in this regard, as now Core is one of the only players in the oil and gas space that can effectively measure and analyze high pressure, high temperature -- HPHT in industry jargon -- reservoirs that are so much more common in ultradeepwater drilling.

The other reason that Core foresaw improving revenue was it expected a recovery in oil and gas activity thanks to a closing of the oil oversupply. This may be the part of Core's thesis that may not hold up. Since the last quarter, oil prices have declined as production in the U.S. has not slowed down as quickly as some might have previously thought, and OPEC production has remained consistently high without any indications of slowing down anytime soon.

Hopefully, increased market penetration from Core's products will make up for a bulk of the company's revenue increases because it probably won't get much love from the oil market.

What a Fool believes
It hasn't been easy to remain a shareholder of Core Labs over the past couple of years. It was one of the first companies that felt the effects of the oversupplied oil market, and shares have declined more than 40% over the past 18 months. 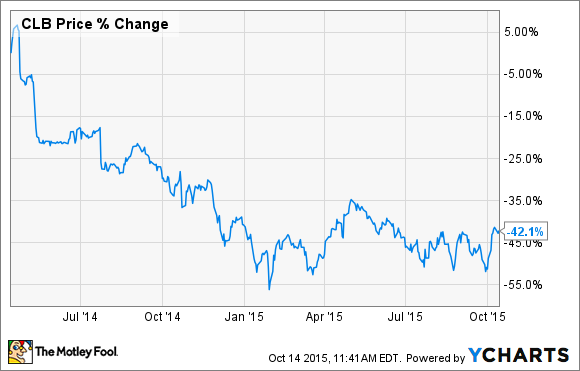 Going forward, though, it looks like things are starting to look better as margins have improved slightly. If the company can actually start to see an increase in revenue as management has predicted, then it wouldn't be surprising to see investors pile back into Core's stock. To get a good gauge on where things go from here, keep a close eye on revenue numbers and whether it was able to increase them through increased market penetration or an improving oil market. The former is probably better, as it would likely lead to even greater performance as the market starts to rebound.