A couple of big one-time charges will hurt GM's headline number. But those charges aren't necessarily bad news, and the underlying story should still look quite promising.

It's earnings season in Detroit! General Motors (GM 1.35%) will report its third-quarter results on Wednesday, October 21.

What Wall Street says: Analysts expect GM to report earnings of $1.18 per share on revenue of $38.58 billion. That level of earnings would be an improvement over the $0.97 that the General earned a year ago.

One-time charges will clobber GM's headline earnings number
Wall Street's estimates don't take "special items" into account, and GM has already let us know that it will have a couple of big one-time charges taking bites out of its bottom-line result for the quarter.

Early last year, GM revealed that it had delayed for years in recalling millions of vehicles with defective ignition switches. The switches are linked to accidents that have caused over 100 deaths. The result was an uproar, a determined effort by then-new CEO Mary Barra to take care of any other overdue recalls that might have been hiding under GM's bureaucratic rocks -- and a slew of lawsuits and criminal investigations.

The charges that GM will take in the third quarter are part of the fallout from that scandal.

On September 17, GM announced that it had settled some (but not all) of the lawsuits filed by accident victims and their families , and that it would take a $575 million charge against earnings for that settlement. 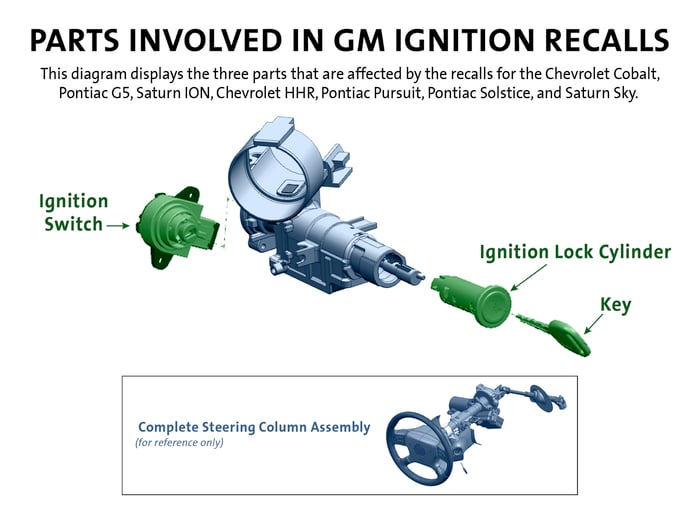 Shortly after that was announced, GM and the U.S. Department of Justice announced that they had come to an agreement under which GM can avoid prosecution for crimes related to the lapses around the recalls. If GM complies with a series of tough conditions for three years, the government will forego prosecution. Among the conditions: A $900 settlement payment by GM. That payment has already been made, and that amount will also appear as a charge against third-quarter earnings.

These were huge payments. But they represent big steps in GM's effort to deal with the consequences of the scandal and move on. Had Barra and her team been less forthcoming in the weeks after the news about the ignition switches broke, and less thorough in their follow-up, the consequences could have been much more expensive for GM.

How's that likely to look?

Decent worldwide sales should power a decent profit
GM's sales in the third quarter were ... not bad. U.S. sales were up 5.6% over the year-ago period, a so-so number, but sales results for some of GM's most profitable products looked a lot better.

Sales of GM's full-size pickups rose a combined 15.5% in the third quarter. That's a big deal. Pickups aren't quite as important to GM's bottom line as they are to rival Ford's (F 1.71%). With Ford, pickups are almost certainly the biggest contributor to profits anywhere in the world. GM's global business is somewhat more diversified than Ford's, at least in terms of profit streams. But pickups are still big generators of profit for the General, and the strong sales growth in the third quarter suggests a strong profit, at least in North America.

The new midsize Buick Envision crossover SUV has been a big hit in China. A U.S.-made version could arrive next year. Image source: General Motors

But this wasn't just a U.S. phenomenon. An all new Buick crossover SUV called the Envision was launched earlier this year in China, and that has helped GM post good sales (and last quarter at least, good profits) despite a marketwide sales slowdown and increasing pressure on pricing in the world's largest auto market. Sales of the Envision continued to be strong in the third quarter, and should help boost GM's results in China once again.

GM is also doing well with crossovers in Europe, where it is making good progress on a long-running effort to turn around its money-losing operation. A crossover is helping in that region too: The Opel Mokka, a twin of the Buick Encore, is among Europe's best-selling SUVs.

Long story short: The underlying story is still strong, but you'll need patience
The good news: The financial consequences of last year's recall mess are probably mostly behind GM. Its current products are strong and competitive, and GM is posting nice sales gains in hot (and profitable) market segments around the world.

The less good news: GM's profitability still lags that of many rivals, and that didn't change in the third quarter. Barra has a plan to match or beat GM's peers in profitability by early next decade. The plan is a good one, and so far at least it's on track, but it's still early days. It will almost certainly give GM's stock a nice boost in time, but this quarter is unlikely to be the time.

That said, the results should show that GM's plan is on track. For long-term GM investors, that's the story we want to hear right now.