Massive writedowns of its Alaskan drilling program and its Carmon Creek oil sand project evaporated any of Shell's profits in the company's third quarter.

That is not a typo. Royal Dutch Shell (RDS.A) (RDS.B) reported a net loss this quarter of $7.4 billion. Even other companies in the space have seen their profits drop over the past quarter, but so far no one has seen such a deep dive into the red like Shell did this past quarter. Based on some of the moves the company made this past quarter, though, these losses were somewhat expected. Let's take a quick look at the numbers and what Shell is focusing on to break through this oil industry slump.

By the numbers
That net loss of $7.4 billion for the quarter brought Shell down from a net profit of $4.6 billion in the same quarter last year. That number is a little misleading, however, because Shell took $7.9 billion in charges to the income statement to write down several investments. A large portion of that was related to the recent cancellation of its Alaskan drilling program, but it is also a reflection of the recent decision to suspend development of its Carmon Creek oil sands project in Canada. According to CFO Simon Henry, the company also took a non-cash charge of $1 billion related to currency fluctuations that wasn't included in its "selected items" writedown.

Even if we take out the effects of all those assets writedowns and impairments, results still weren't too impressive. Upstream earnings were dragged into the red mostly on its Americas segment, which lost $1.2 billion this quarter. But like many of its peers, Shell's refining and chemical segments helped bail it out from a completely disastrous quarter, as seen in the following chart: 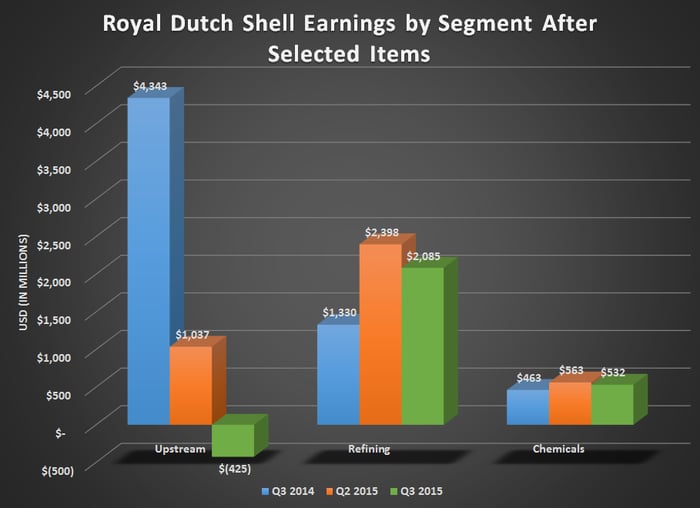 Those weak upstream earnings in its Americas segment is starting to look more like a structural issue the company will need to deal with. This is the fourth straight quarter where the company has lost money on production in the Americas. To be fair, the Americas segment is dealing with much lower price realizations than its international segment. At the prices it saw this past quarter, it's hard to imagine any company generating a profit.

The one aspect of the company's results that you could say wasn't too bad is that it was able to generate $11 billion in cash for the quarter including working capital improvements. That was enough cash to cover its capital obligations for the quarter and leave some extra to bolster the balance sheet. This has helped the company keep its net debt to capital ratio at a very comfortable 12.7% even after a year of declining oil prices.

The big picture: Working through the portfolio for the BG merger
You could call this quarter's decision to write down its earnings so heavily as a way of ripping off the bandage. Alaskan drilling had been giving the company fits for several years now, and chances are it wouldn't have started any significant developments in the area before the exploration licenses in the Beaufort and Chukchi start to expire in 2017 and 2020, respectively.

The same could be said for its Carmon Creek oil sands operations. Several new oil sources have developed in recent years that have much lower breakeven costs, and it could be a very long time before higher-cost sources such as oil sands start to become economically viable again.

Another reason that Shell can now cut ties with these oil sources is that it will have plenty of other investment opportunities available to it with the acquisition of BG Group. The combined companies will have very strong presences in both LNG and non-Arctic deepwater drilling. By refilling its quiver with new development projects, those other more expensive projects won't be missed as much.

What a Fool believes
Based on the actions that Shell's management has taken in the face of the recent oil price slide, it's pretty clear that they are trying to reposition themselves before the BG Group merger. By combining the two companies, it will be concentrated in two major areas: deepwater and LNG.

It's commendable that the company has been able to cut costs and get back to some semblance of cash generation that pays for its investments and dividends. However, we may want to wait and see since a large portion of that cash was from working capital improvements. Until we get a clearer picture of what the Shell/BG combined company looks like and how it performs, though, it may be best to sit on the sidelines and watch this story unfold.