Please ensure Javascript is enabled for purposes of website accessibility
Log In Help Join The Motley Fool
Free Article Join Over 1 Million Premium Members And Get More In-Depth Stock Guidance and Research
By Tyler Crowe, Matthew DiLallo, and Adam Galas - Oct 31, 2015 at 10:05AM

Every sector has its outliers. So far in 2015, Alon USA Energy, HollyFrontier, and Valero Energy have outperformed both the energy sector and the broader market by a wide margin.

Based on what oil and gas prices have done during the past year, the term "energy stock" probably brings visions of share prices in free fall and investment dollars going up in flames. That isn't necessarily the case, though, because there are several companies that have not only outperformed the Energy Select Sector ETF (XLE 2.70%) -- a general energy-market-tracking ETF -- in 2015, but also soundly beaten the S&P 500.

We asked three of our energy contributors to each highlight a company in the energy sector that has gained more than 20% this year and why it has left the broader market in the dust. Here's what they had to say.

Tyler Crowe
One company you may not think about when you hear about market-crushing returns is Alon USA Energy (NYSE: ALJ). After all, the nation's seventh-largest oil refiner isn't exactly what you would call a headline grabber. Yet from that small position in the refining market, Alon has been able to outpace both the energy sector in general and the S&P 500 for the year. 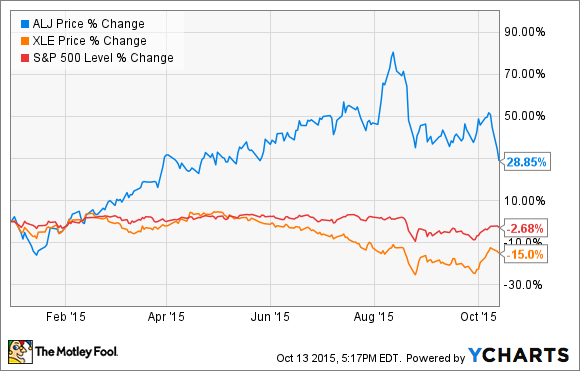 One reason Alon has done so well this year is that like other refiners, its profitability increases as crude oil prices fall, since it uses crude oil as a feedstock. Another component that's made Alon so compelling this year is that it has a strong refining presence in one of the most lucrative gasoline markets in the United States: California. These things have helped the company realize outsize margins on its retail petroleum products.

Now that the company has cleared itself of some debt -- it's paid down $600 million since 2011 -- it's looking to use some of its free cash flow to invest in high-return projects. One area the company has focused on is crude and refined logistics to improve delivery of its feedstocks and refined products through its MLP, Alon Energy Partners (NYSE: ALDW). And to cap it all off, the company increased its dividend payment by 50% in May to $0.60 -- a 3.2% yield -- on an annualized basis.

It's hard to say if Alon will be able to repeat this kind of performance in the future. A sharp increase in crude oil could just as easily wipe out the gains it has seen over the past year. However, if it can use this period of cheap oil to invest in some projects that will help to lower operating costs, then Alon could be in good shape to perform well in the future.

Adam Galas
Despite the oil crash of the past 18 months, HollyFrontier (HFC) is up an impressive 28% in 2015, mostly because refiner margins increase when crude prices are low. For example, in its latest quarter, Holly's gross refining margin per barrel was up 20% year over year to $17.42, which, when combined with lower operating costs, allowed for 60% improved earnings per share. Throw in $325 million in share buybacks, and total EPS was up 111%. So refiners make for potentially good hedges for oil investors, especially since no one knows how long low crude prices will last.

Another reason is that it owns a 37% equity stake in an MLP, Holly Energy Partners (HEP 0.12%). This relationship allows it to monetize its own midstream assets in a highly tax-efficient manner that creates a recurring and fast-growing income stream. In fact, since 2005 the combined general partner fees derived from Holly Energy Partners have been growing at over a 40% compound annual rate.

Finally, Holly Frontier's management isn't just content to let favorable commodity prices work in its favor. Rather, it's aggressively growing and diversifying its operations into higher-margin products, with three major growth investment projects totaling $365 million over the next 2.5 years that it expects to increase its annual EBITDA by 16%.

These factors are probably why Wall Street is so gung-ho on HollyFrontier this year, and you could argue that it has earned its wonderful returns. Of course, investors shouldn't expect a repeat of these returns in 2016 unless oil prices weaken even further, which is impossible to predict.

Matt DiLallo
Sticking with Tyler's and Adam's refining theme: Valero Energy (VLO 3.57%) has also absolutely crushed the market this year. It's also up by more than 20% while the market has been flat to down all year. 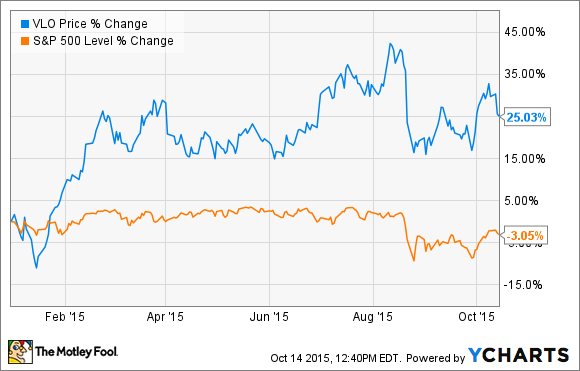 Valero has really thrived on low oil prices and rising demand for gasoline. Last quarter, for example, the company reported $1.4 billion in net income, or $2.66 per share. That not only blew away its results in the second quarter of last year after earnings more than doubled, but it trounced analysts' estimates as well.

A few factors were at play here. First, the company's refining throughput margins jumped $3.87 per barrel from the second quarter of last year and averaged $13.71 per barrel during the second quarter of this year. In addition, the company's average throughput volume increased by 87,000 barrels a day from the year-ago quarter to average 2.8 million barrels a day last quarter. That double boost from higher margins and volumes really fueled the company's bottom line and stock price.

Thanks to the higher earnings and resulting cash flow, Valero has really juiced its shareholder distributions this year, with plans to return 75% of its net income to investors. While some of that cash is being returned through a higher dividend, the company has also accelerated its share buybacks and now has the authorization to buy back almost 10% of its shares outstanding.

Valero is really enjoying a strong year that few are talking about. Those strong returns could continue as long as oil remains weak and continues to fuel strong demand for gasoline.