Though the company is immersed in debt, SunEdison (OTC:SUNEQ) shows no signs of slowing down in its drive to conquer the renewable-energy industry. The market, once enthusiastic about the company's prospects, has taken a sharp turn for the skeptical, as shares are down more than 40% over the past year.

Apparently the company has heard the market's call for caution, and it has decided to take action. Having recently released an updated business plan, management announced its decision to lay off about 15% of its employees. Is righting a ship as simple as cutting its workforce by a few thousand, or does it simply mean that fewer hands will be on deck as the ship goes down?

In deep with debt
Over the past few years, SunEdison has emerged with one of the largest global portfolios of renewable-energy assets in the industry. However, it hasn't come cheap, and many wonder if this will be the company's undoing. It's the building out of this portfolio that is largely responsible for the debt. For example, during the past year, the company acquired Vivint Solar for $2.2. billion. Compared with two of its peers, First Solar (NASDAQ:FSLR) and SunPower (NASDAQ:SPWR), SunEdison's debt woes are glaringly obvious. Based on market cap, First Solar is about 85% larger than SunEdison; SunPower exceeds it by approximately 18%. Based on annual total long-term debt, though, SunEdison is 33 times deeper in the hole than First Solar and six times more than SunPower. 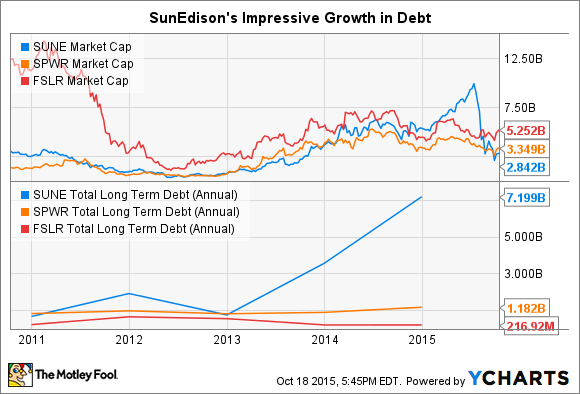 In its early October business update, management contended that SunEdison's cash flows cover the needs of the short-term debt. Take it with a grain of salt, though. There's a looming specter on the horizon: $1.3 billion in debt is due in 2020. Plus, there's no guarantee that the company won't be taking on more debt in the near future.

The right turn?
According to the 8-K filed with relation to the workforce cut, management's intent is to "to remove duplicative activities created as a result of merger and acquisition activities and business growth." The savings won't be immediately recognized, for the company expects to incur charges of $30 million to $40 million over the next three quarters.

These measures are vital, but they should only be the beginning of further action in reducing operating expenses. Like the debt situation, SunEdison far outpaces its peers in SG&A spending. In its update, management stated that it had previously identified operating expenses in 2016 to equal about $900 million -- the new outlook approximates the expense to be $600 million. Should management meet this expectation, it would indicate a stabilization in the spending, as the company's operating expenses for 2015 are expected to be about $600 million as well. 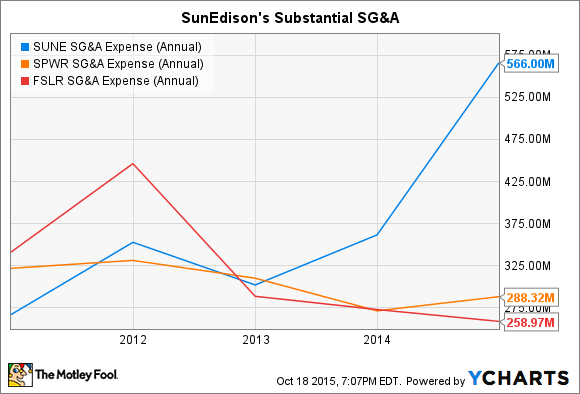 Peers SunPower and First Solar have been busy over the past few years reducing their operating costs while SunEdison has been busy moving in the opposite direction -- not only increasing spending but also doing so at a substantial clip. So as positive as the 2016 reduction would be, the company needs to ensure that this is not a temporary solution but rather the beginning of a long-term trend.

A cloudy crystal ball
As intent as management may seem in maintaining its operating expense at the current level, one should be hesitant to take the company at its word. Consistency in its message is not one of the company's strong suits. This past February, at its Capital Markets Day, the company issued guidance on its 2016 installed capacity -- 2,800 MW to 3,000 MW. Several months later, in July, the company revised the guidance, projecting 4,200 MW to 4,500 MW of capacity. Third time's the charm: In October's business update, management identified 3,300 to 3,700 as the total MW range for 2016.

The varying ranges indicate the precarious situation in which the company finds itself, for it's essential that it grows, both to fund operations and secure projects to drop down to its yieldcos.

The takeaway
There's a lot of pessimism surrounding SunEdison at the moment, and its business update only provided a momentary glimmer of hope. It seems to have flown a little too closely to the sun, melting its waxen wings in pursuit of a massive portfolio. But the important thing is that management has recognized it and is attempting to correct its course. This is only a first step, though, and many more steps are needed in the coming year to fully correct its course -- keeping its wings intact and the company aloft.