Daimler and Toyota have made more money from Tesla Motors than the company has ever made itself.

Tesla Motors' (TSLA -2.77%) success on the stock market has been a boon to early investors in the public company. Ironically, it's also helped some of the companies targeting Tesla's alternative fuels market.

Amazingly, each company made a bigger profit from Tesla Motors than Tesla Motors has ever made itself -- even though neither company seemed keen on being a long-term partner for the electric-vehicle upstart. 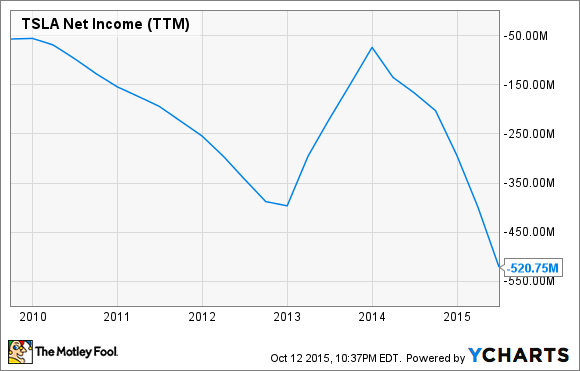 Toyota decided not to renew its Rav4 EV supply deal, and Daimler is winding down its reliance on Tesla as it builds out its own battery capacity in Germany. They've both moved on to their own alternative fuel plans, taking Tesla profits with them.

Building competitors of the future
Daimler and Toyota aren't just sitting still with their profits from the Tesla Motors investment. Daimler recently said that half of its annual R&D budget, or about $1.65 billion, goes to CO2 reductions, including fuel cells and electric-vehicle investments. It's conceivable that the profit Daimler made on Tesla was enough to pay for a year or more of EV research.

Within the Daimler family, the move beyond fossil fuels is happening quickly. It's well known that Mercedes-Benz is introducing electric vehicles, but it's also launching an energy storage business, just like Tesla Motors did. The product was recently launched, and with 2.5 kWh and 5.9 kWh models, it's going after the same residential and commercial customers Tesla is with its energy storage plans.

Daimler also has an electric vehicle called the Denza EV in China, made with partner BYD. It's been busy investing in non-fossil-fuel vehicles, and Tesla Motors happened to help make those investments possible.

Toyota is taking a little different route, developing hydrogen fuel cell vehicles. It's launching the Mirai in the U.S. later this year and has its sights set on slowly growing out the hydrogen infrastructure in Japan and the U.S.

The argument Toyota uses for hydrogen over electricity is that electric vehicles have inherent negatives like long recharge times and heavy weight that can be offset in a hydrogen fuel cell vehicle with the same performance (both are driven by electric motors). Time will tell if Toyota is making the right bet, but it's interesting that it made so much money from its Tesla investment and then went in the opposite direction with its own development.

Making millions off Tesla Motors
There's often a lot of collaboration in the auto industry, but in this case, Tesla Motors working with Daimler and Toyota resulted in large profits for its two investors and helped build competitors' EV business as well. If either, or both, manufacturers end up beating Tesla Motors at the electric vehicle game, it would be an ironic twist of fate in the auto industry.

Travis Hoium has no position in any stocks mentioned. The Motley Fool owns shares of and recommends Tesla Motors. We Fools may not all hold the same opinions, but we all believe that considering a diverse range of insights makes us better investors. The Motley Fool has a disclosure policy.

Should Investors Be Excited About Toyota's Battery Announcement?
405%