A month ago it seemed like biotech stocks couldn't do anything right. Shares of the iShares Nasdaq Biotechnology ETF (NASDAQ:IBB), which holds a huge collection of biotech stocks, were pummeled over fears that political candidates were going to take a hatchet to drug prices. It appears that investors' fears have since subsided, as the ETF is firmly back in positive territory for the year, and investors who held on tight are once again far outpacing the returns of the S&P 500. 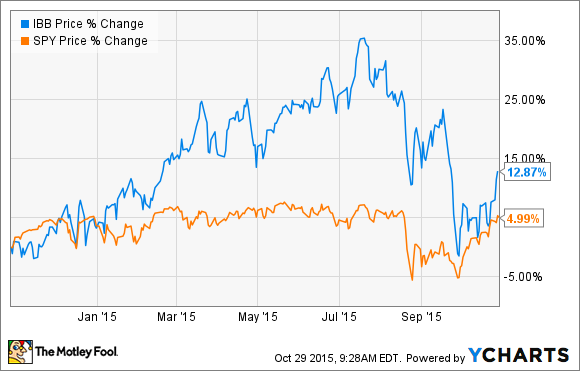 While biotech stocks' valuations are not quite as appealing as they were just a few weeks ago, we Fools think there are still plenty of interesting names for investors to consider right now. We asked our team of Motley Fool contributors to share a biotech stock that they think is a buy right now. Read below to see if you agree with their reasoning.

George Budwell: Exelixis (NASDAQ:EXEL) is a small-cap biotech stock that might be worth adding to your portfolio in November because the company has an important regulatory catalyst during the month. Specifically, Exelixis and its partner Roche (OTC:RHHBY) are supposed to receive the final word from the FDA by Nov. 11 on cobimetinib's regulatory application as a treatment for BRAF V600 mutation-positive advanced metastatic melanoma when used in combination with Zelboraf.

At the American Society of Clinical Oncology's annual meeting last May, Exelixis announced that this cancer-fighting combo produced a progression-free survival, or PFS, rate of 12.3 months, compared to 7.2 months for Zelboraf alone, in a pivotal late-stage study dubbed "coBRIM".

Based on this impressive trend in PFS, the EU's regulatory agency issued a favorable opinion on the co-therapy that's expected to lead to a marketing approval before the end of the year. And last September, the licensing and supervisory authority of Switzerland gave the combo treatment the green light for patients with advanced melanoma. I'm thus cautiously optimistic that the FDA will approve this regulatory application.

As such, the bigger mystery at this point appears to be cobimetinib's commercial potential for this initial indication. The handful of estimates that have emerged from analysts so far suggest that peak sales could range from anywhere between $150 million to $800 million per year. The problem is that the advanced melanoma landscape is already crowded, and there are several other experimental treatments showing promise in clinical trials right now. So Exelixis and Roche's combo treatment may have trouble standing out in the crowd.

All told, I think an FDA approval for cobimetinib would go a long way toward improving the market's view of Exelixis as a viable long-term investment. And that's perhaps where the deep value of this potential regulatory approval may ultimately lie.

After reporting positive phase 3 data showing that plecanatide achieved its efficacy endpoints in CIC patients with a potentially best-in-class safety profile, shares jumped to $10; however, shares have since retreated, and that's creating an intriguing opportunity for risk tolerant investors.

Synergy Pharmaceuticals expects to file for FDA approval of plecanatide in the CIC indication in January, and if approved, then plecanatide could begin competing against Ironwood's (NASDAQ:IRWD) Linzess by the end of next year.

If so, then plecanatide could be in a very good position to win away market share from Ironwood. In trials, between 3% and 4% of patients discontinued plecanatide therapy due to adverse events, such as diarrhea, and that appears to match up favorably to the 9% discontinuation rate in Linzess' trials.

Since Linzess' U.S. sales are tracking at an annualized pace of more than $440 million exiting Q2, up 56% year-over-year, the market opportunity for Synergy Pharmaceuticals could be substantial -- but there are risks. For instance, there's no guarantee that Synergy's ongoing trial evaluating plecanatide's use in IBS-C will pan out, or that the FDA will even approve plecanatide. Additionally, Ironwood is working on a lower dose version of Linzess that may reduce adverse events that lead to discontinuation and in turn help it maintain market share.

Brian Feroldi: Despite the bull run in all things biotech, investors in Alexion Pharmaceuticals (NASDAQ:ALXN) have been left behind so far this year, as shares of the rare disease-focused biopharma are actually down more than 5% year to date. Given recent good news on the regulatory front, I think this stock is primed to have a prosperous 2016.

Up until recently, Alexion's stock has been propelled higher on the back of only one drug, Soliris, which is approved to treat paroxysmal nocturnal hemoglobinuria and atypical hemolytic uremic syndrome, two ultra-rare diseases. Soliris is an extremely expensive drug that is expected to pull in more than $2.5 billion in revenue this year, and it continues to grow at a rapid clip. In the most recent quarter the drug produced volume growth of 29%, though foreign exchange rates knocked down actual revenue growth to "only" 20%.

However, Alexion has recently become more than just a one-drug company, as it recently received regulatory approval for two new drugs, Strensiq and Kanuma, that are poised for fast growth. Strensiq, which treats a rare and potentially deadly disease called hypophosphatasia, was recently approved in the U.S., in addition to the European Union, Japan, and Canada. Kanuma, which treats another rare disease called lysosomal acid lipase deficiency, was also recently approved in the European Union, and is currently pending approval in the U.S. and Japan.

Both Strensiq and Kanuma hold the potential to reach peak sales of $500 million to $1 billion each, which should not only help to accelerate the company's growth rate but also provide it with revenue diversification.

While I'll be the first to admit that shares are currently not cheap -- they are trading around 30 times 2016 earnings estimates -- I think Alexion's shares deserve their premium price tag given the company's long history of success and strong future growth prospects.