Please ensure Javascript is enabled for purposes of website accessibility
Log In Help Join The Motley Fool
Free Article Join Over 1 Million Premium Members And Get More In-Depth Stock Guidance and Research
By Scott Levine - Nov 2, 2015 at 9:45AM

The 21st-century energy landscape is a land-grab -- energy efficiency, renewable power generation, and electric-vehicle infrastructure are just some opportunities. How great would it be for one company to have its hand in all of them? 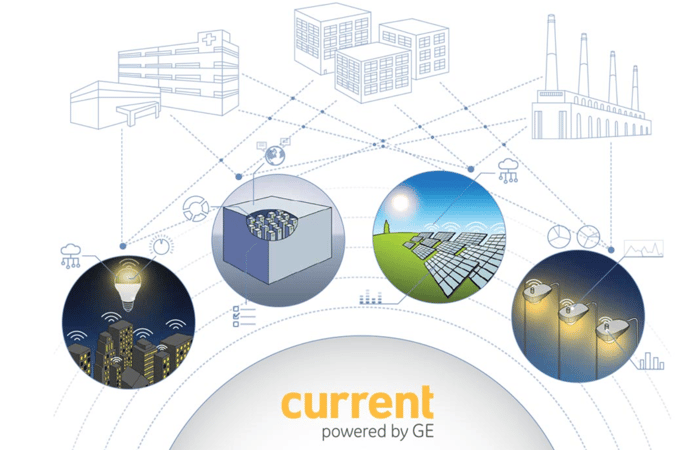 Distinguishing itself from competitors, General Electric (GE -0.65%) refers to its Internet of Things solutions by another name -- the Industrial Internet. And, further setting itself apart from competitors, GE is forming a new company, Current. The venture, according to GE, demonstrates its "commitment to take energy to the next level, focusing on custom outcomes for our commercial and industrial customers, municipalities, and utility partners, and delivering a platform that can be upgraded as technology advancements are made."

The power play
GE is wasting no time in getting Current up and running. The new entity already has $1 billion in revenue from products and services in GE's energy efficiency, solar, storage, and onsite power divisions. The foundation for GE's endeavor is its Predix platform, which has already proved to be lucrative in its own right. At the company's annual Mind and Machines event, management estimated that its Industrial Internet software and solutions will account for $5 billion in revenue in 2015, with $6 billion in orders.

GE has already begun piloting Current's solutions, and companies such as Walgreens Boots Alliance have high hopes. Matt Harris, divisional vice president of facilities asset management for Walgreens, recognizes Current's potential value proposition. According to Harris, it's important for his company to "continue to find innovative, sustainable technology and explore ways to leverage software platforms like GE's Predix to assess our energy needs and increase efficiency."

Watt's up with wind, water, and the rest?
Current isn't GE's first foray in applying the Industrial Internet to its energy offerings. Launched last May, the Digital Wind Farm is a combination of wind turbines and interconnected digital technology that improves energy output by as much as 20%. Operators use real-time data gathered by the Predix software to monitor the facilities' current performance and, through further analysis, optimize future operations. In addressing the breadth of opportunities afforded by the Predix platform, Steve Bolze, president and CEO of GE Power & Water, said, "Big data is worthless without the insight to take action, and our vision for the industry is to use today's data to predict tomorrow's outcomes." Addressing the wind industry in particular, Bolze says, "By harnessing the full power of the Industrial Internet, we can create a world where wind farms learn, adapt, and perform better tomorrow than they do today."

It's difficult to ascertain how much the new Digital Wind Farm offering is contributing to GE's revenue, since it doesn't specifically break out the wind division's financials -- instead, lumping it into the renewables section of the power and water segment. Nonetheless, it's clear that of GE's seven industrial segments, power and water is one of the most profitable. The segment accounted for $6.5 billion in revenue for the third quarter of 2015 -- the most of any industrial segment. Of this, the company reported that renewables were up 8% year over year. Power and water accounted for $1.3 billion in segment profit for the same quarter -- the second highest amount of all industrial segments.

The jolting outlook
Current's intention is to consolidate a number of GE's operations in LED, solar, energy storage, onsite generation, and electric-vehicle infrastructure into one entity. But it will also be bringing its Predix hardware and software to utilities to enhance power-grid reliability and resilience. This pursuit of developing the smart grid, in and of itself, is a significant opportunity. Navigant Research estimates that, worldwide, revenues for grid-edge technologies for distributed energy resources will grow from $8.5 billion in 2015 to $14.5 billion in 2024 -- for the same period, total revenue will equal approximately $120 billion.

The takeaway
Marking the company's willingness to evolve, GE's decision to fully embrace the Internet of Things and its application to the energy industry is an important one if it intends to maintain its leadership position in bringing digital solutions to the sector. GE is looking to ensure the start-ups success by staffing it with 200 employees -- many of whom have served in other leadership positions with the company. For example, Current's president and CEO, Maryrose Sylvester, had previously led GE Lighting, which reported $2.5 billion in revenue for 2014.

It will be interesting to see Current's results when GE reports its next round of earnings to if it stays on track of reaching management's estimate of $5 billion in revenue by 2020 -- emerging as the significant growth engine which management thinks it will be.