The solar industry is maturing in the U.S., and SolarCity (NASDAQ:SCTY.DL) is realizing it has to mature as well. That means giving up on almost all of the audacious goals the company -- and its leaders, Elon Musk and Lyndon Rive -- laid out in the past.

Third quarter earnings showed that maturation take a big step forward. We saw the company pull back from its goal of having 1 million customers by mid-2018, saying that it is focusing on cash flow over growth, and even that it was going to miss 2015 guidance by nearly 10%.

In short, the company isn't what investors thought it was. That may be a good thing long-term, but it's not what investors were looking for, and the stock is being pummeled as a result. Here's what changed, and what you should think about it.

The new focus of SolarCity
SolarCity has always been a growth machine. The company often boasted about doubling installations every year, and there seemed to be no end in sight to its growth. The 1 million customer target was a hallmark of the company's business strategy, and was brought up on every earnings release and every conference call. On Thursday, all of that changed.

SolarCity is now starting to focus on cost reductions and becoming cash flow positive by the end of 2016. The reason is that cost reductions on installations are being overshadowed by rapidly growing increases in sales costs. In Q3, sales costs per watt jumped 31% from a year ago, a figure that should be going down, not up. And even that expense didn't bring the kind of growth SolarCity was expecting (which I'll cover in a moment).

One interesting note from the conference call is that to reach positive cash flow next year and take advantage of the looming drop in the investment tax credit from 30% to 10%, the company is going to raise prices in 2016 by 0.25 to 1 cent per kWh in some areas. That's a shocking move from a company that's always talked about cost reductions, but it may bring the cash the company needs to meet its new goals.

Installs fall WAY short
The huge shocker from SolarCity's earnings was that it reduced 2015 installation guidance from 920-1,000 MW to a range of 878-898. It said 2016 installations will be around 1.25 GW, which is probably well below what most investors were expecting given the company's historical 100% growth rate.

This shows the shift from growth to cash flow, but it also changes how investors are going to look at this company. It's no longer a massive growth company. Instead, it may be entering a phase with little to no growth after 2016 when you consider the falling ITC.

Costs aren't what they should be
Driving all of these changes in strategy is the chart below. You can see that installation costs (in green) have come down nicely over the past three years, and are already close to the company's 2017 goal. But sales costs (dark grey) are rising on a per watt basis, and are now 60% higher than they were two years ago. 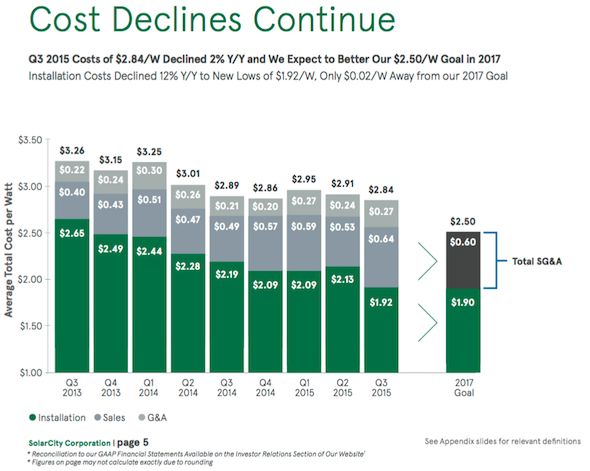 SolarCity has long passed this off as investing in growth, but it's becoming clear that the investment isn't paying off as efficiently as expected. On the conference call management even admitted that the harder the company pushes sales, the harder it is to close the next sale. So slowing the rate of growth should help keep sales effective.

Interestingly, SolarCity said it wouldn't be cutting sales expenses, only growing it more slowly than installations. But at a run rate of $129.3 million per quarter in sales and marketing expenses the company would be at $0.41 per watt installed at 2016's guidance of 1.25 GW. That's still higher than sales costs in Q3 2013.

Keep an eye on sales costs in the future, because I'm not sure SolarCity can grow to 1.25 GW with the spending it has today.

Is SolarCity a star or a dud?
I recently wrote that I thought SolarCity was entering value territory for investors, and much of that thesis is unchanged after Thursday's earnings report. The company has long-term contracts and a market leading position in residential solar energy. And I think it's the right time to slow growth -- so while the market may not like slower growth, as a long-term investor, I do.

What I don't like is the continued reliance on leases and the rapidly rising sales costs. I do like that SolarCity is improving its technology and focusing on building a cash flow machine. Long-term, it should be able to add cash-generating projects year after year and pay out dividends with the extra cash. In that sense, SolarCity is like a yieldco with a development company attached, and that's not a bad place to be.

Given the market's reaction to slower growth, I'm not ready to jump into SolarCity shares yet, but I'm getting close. The company's market cap is now about 1x its net retained value, which is a decent value for investors and if you have a long-term horizon and can ride out the stock's ups and downs I think the payoff will come when more efficient panels and energy storage hit the market.