While Spirit Airlines (NYSE:SAVE) had prepared investors for disappointment with a mid-October investor update, shares of the budget airline plummeted even further after its earnings release last week. Unit revenue fell 17.5% year over year in Q3 and Spirit expects an even bigger decline in Q4. 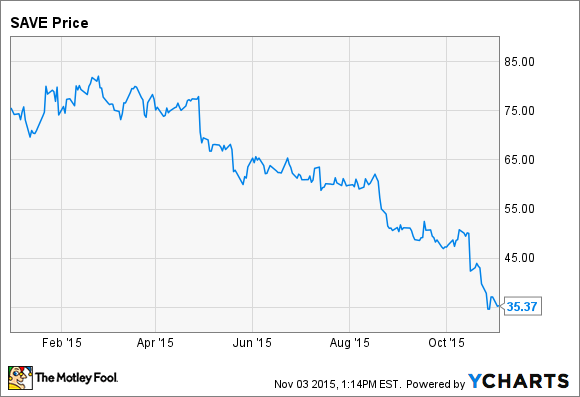 CEO Ben Baldanza even raised the possibility that Spirit's earnings could contract somewhat in 2016, causing many investors to lose all hope. The stock now trades for just nine times earnings, emphasizing how pessimistic investors are. However, Mr. Market is seriously underrating Spirit Airlines' long-term prospects.

Revenue pressure should moderate in 2016
While investors and analysts have become very pessimistic about Spirit Airlines lately, it's worth noting that the airline posted a record pre-tax profit margin of 26.9% last quarter, putting it near the very top of the airline industry. Yet this was overshadowed by Spirit's steep unit revenue decline.

Spirit Airlines has historically had success by undercutting the major airlines on price. Due to its low cost structure, Spirit has been able to earn superior profits with much lower fares. However, these rivals -- led by American Airlines (NASDAQ:AAL) -- are increasingly choosing to match Spirit's prices.

It's counterintuitive that airlines with higher costs could put pressure on Spirit Airlines' pricing. But as American Airlines President Scott Kirby recently noted, this price matching is allowing American and other legacy carriers to fill what would otherwise be empty seats at off-peak times.

Fortunately, the industry is probably nearing the bottom on pricing. Last quarter, Spirit's average fare fell 21% year over year to $66.96. For Q4, Spirit is projecting an even steeper decline from a lower base of $73.21. That will push its average fare below $60 this quarter.

Fares are significantly higher on peak days when it's not necessary to offer such low prices to fill up planes. Meanwhile, wide availability of bargain fares will stimulate demand. Legacy carriers like American Airlines can't justify further price cuts when they're already filling their planes. As a result, I don't expect the pricing pressure to worsen from here in absolute terms. As the year-over-year comparisons get easier during 2016, Spirit's unit revenue declines should abate.

It's all about low costs
While I expect Spirit's unit revenue to stabilize during 2016, it may not return to growth (barring a big increase in fuel prices). This is one of the biggest concerns held by the bears. However, whereas other airlines rely on unit revenue growth to maintain or expand their margins, Spirit is much more focused on unit cost reductions.

Spirit is still one of the smaller U.S. airlines today; it ended last quarter with 76 aircraft in its fleet. This means it has the opportunity to reduce its unit costs simply by growing and achieving greater scale.

Beyond that, a strategic shift toward larger planes will reduce unit costs. By the end of 2019, the average seat count on Spirit's planes will rise by about 15% relative to mid-2015, mainly due to the replacement of 145-seat A319s with 228-seat A321s. All else equal, this would drive a high-single-digit decline in Spirit's unit costs. This densification strategy and a move to new engine technology should drive 2%-3% annual improvements in fuel efficiency, too.

Spirit is shifting its fleet away from the A319 toward larger planes. Image source: Spirit Airlines.

Spirit Airlines will also benefit from lower financing costs as it has started to purchase aircraft rather than lease them. The company recently completed its first EETC financing (a low-cost method of raising aircraft debt). It achieved an average interest rate of just 4.15% to finance 15 planes arriving in Q4 and throughout 2016.

CFO Ted Christie did warn investors recently that the company will face some cost headwinds related to the leased aircraft it is returning in the next few years. However, he still expects Spirit's unit costs to stay on a steady to declining trajectory.

Strong growth and strong margins
While Spirit Airlines is forecasting a year-over-year margin decline in Q4 and Baldanza has suggested that its profit margin could fall again in 2016, the company is currently earning well above its long-term operating margin target of at least 15%. According to its most recent guidance, Spirit expects to end 2015 with a 21.5%-23% operating margin.

Spirit's perceived "problem" comes from the fact that it began 2015 expecting to post an even higher 24%-29% full-year operating margin. Even if its profit margin declines again in 2016, it will almost certainly remain well above 15%.

Given Spirit's steadily improving cost structure and already rock-bottom fares, it doesn't seem very likely that the company's profit margin will fall below its long-term target. Even if Spirit can only sustain an 18% operating margin in the long run (down a few percentage points from 2015), it will be able to produce tremendous earnings growth in the next decade as it expands.

Spirit plans to grow 15%-20% annually for the foreseeable future. That could boost its revenue to roughly $8 billion-$10 billion by 2025. (Its long-term growth opportunity is even larger.) At that scale, Spirit Airlines should produce annual operating income of at least $1.5 billion, more than triple its operating income for the past 12 months.