That's how much Shire plc (NASDAQ: SHPG) executives think Dyax Corporation's (NASDAQ: DYAX) flagship drug DX-2930 could provide in sales at its peak. If DX-2930 provides $2 billion in peak annual sales, then suddenly Shire's pricey $5.9 billion buyout (plus an additional contingent value right of $4 per share to Dyax shareholders -- another $646 million -- payable upon approval of DX-2930 in HAE) of Dyax looks pretty reasonable. Three-ish times the major drug's peak sales is more or less in line with what biotech buyouts are running these days.

The question is, was Shire right to pay so handsomely for a company whose main drug has only reported phase 1 data?

If you can't beat 'em, buy 'em.
As Shire CEO Flemming Ornskov explained to analysts: "Shire's strategy is...[to] have the best-in-class products... and we think DX-2930 has the opportunity, if it mirrors in phase 3 what we've seen in the clinical data so far, to be a best-in-class product" (this and all other quotes courtesy of S&P Capital IQ).

Dyax and Shire have competing drugs designed to treat and prevent the nasty swelling attacks that patients with the rare disease hereditary angioedema (HAE) experience. Cinryze, Shire's drug, is the current big dog in the space, but it is under direct threat by DX-2930, whose impressive phase 1b data first put Dyax on my radar. If its current (early stage -- more on that here) data holds, DX-2930 is on track to become the new standard of care for prevention of HAE attacks, which will undermine Cinryze's current 50%+ estimated market share for prophylaxis. Shire CFO Jeffrey Poulton pulled no punches: When asked about how DX-2930 would fit into the HAE portfolio, he said "We do think there will be cannibalization of Cinryze".

How do you get to $2 billion in peak sales?
Analysts have previously published peak sales estimates for DX-2930 of up to $1 billion, but Shire thinks DX-2930 can double that and bring in as much as $2 billion. I'll let Poulton explain, from Shire's M&A call:

Here's a visual representation, from Shire's presentation on the Dyax purchase: 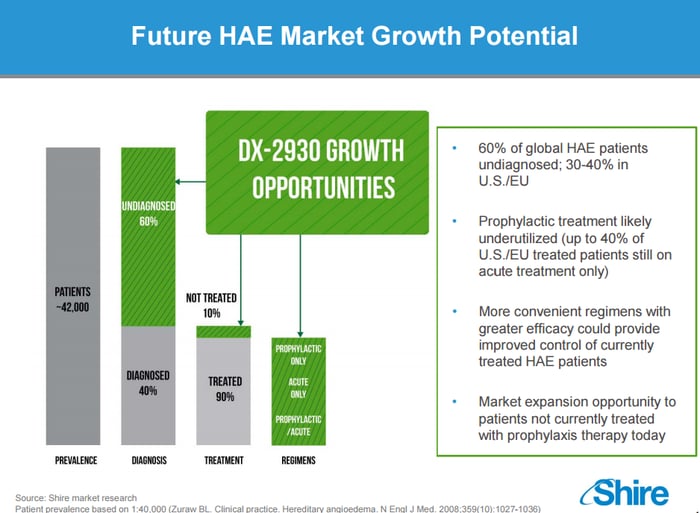 Let's break that down piece by piece.

- 1/3 from increasing diagnosis and treatment rates. New drugs and their associated educational campaigns often lead to more diagnosed patients, and Shire expects DX-2930's rollout to be no different, if the drug makes it to market. Shire CEO Flemming Ornskov shared on the M&A call that "in the well-established markets of the U.S. and EU, we estimate that 30% to 40% of patients are still undiagnosed." More broadly worldwide, Shire estimates that 60% of patients remain undiagnosed. I'd say the numbers they've laid out are reasonable, but I'm a little skeptical that underdiagnosis is that prevalent, particularly in the U.S. and the EU.

- 1/3 from patients switching away from prophylactic products like Cinryze and androgens. I totally buy it -- we've known for some time that an approved DX-2930 would be a major threat to Cinryze, so it makes sense that we'd see switching. This is particularly true since Shire will be encouraging the switch -- management expects that DX-2930 will be a higher-margin product, so that means more money in Shire's pocket per unit sold. Nonetheless, it hurts some to have Cinryze get cannibalized -- the drug brought in $188 million in sales last quarter, for an annualized run rate just shy of $800 million, and it represents 11% of Shire's total Q3 revenue. This reminds me a bit of the problem Dyax would face as a stand-alone company -- Kalbitor, its currently marketed drug for treating HAE attacks, was likely going to suffer from some reduced use if DX-2930 made it to market. But at the end of the day, DX-2930 was the bigger opportunity for Dyax, and is the bigger opportunity for Shire, so management should follow the money.

- Switch from solely acute therapy to DX-2930 for prophylaxis. Shire's management estimates that around 40% of currently diagnosed and treated patients are only taking drugs to treat attacks, instead of taking drugs to prevent those attacks. Since Shire is so involved in the HAE market already with Cinryze and and Firazyr, I suspect management's estimates are quite accurate. This is an opportunity not just for peak sales, but perhaps more excitingly for long-term sales. Prophylactic use means patients would be taking DX-2930 year in and year out, with strong dividends for patient quality of life and annuity-like returns for Shire.

All in all, I think Shire's $2 billion peak sales estimate is perhaps a little generous... but the Dyax deal has other potential upside.

But wait, there's more!
Dyax isn't just a one-trick pony (although it's pretty obvious that the major focus is on DX-2930, as it's by far the biggest potential moneymaker). Dyax also has a significant Licensing and Funded Research Portfolio (or LFRP), which is chock-full of drugs that Dyax helped develop and receives royalties on if they make it to market. Most significant right now is Eli Lilly's (NYSE:LLY) Cyramza, a cancer drug approved by the FDA for several cancer indications and in clinical trials for several more. Dyax received $5.6 million in royalties on Cyramza last quarter. Cyramza -- and most of the drugs in the LFRP, which generated $1.4 million in development and license fees in addition to the Eli Lilly revenue -- are a nice bonus, but they're really just icing and not key to the investing thesis.

That is, except for anti-LINGO, the multiple sclerosis drug that Dyax is helping Biogen (NASDAQ:BIIB) develop. Anti-LINGO is one of Biogen's two primary pipeline candidates, and central to the company's turnaround strategy. The drug offers the possibility of not just treating MS and slowing its damage to the nervous system, but potentially reversing it. And that's why analysts see as much as $10 billion in potential peak sales for the drug. Dyax hasn't disclosed how much of a royalty it would receive from potential anti-LINGO sales -- it appears to get about 5% of Eli Lilly's Cyramza sales, based on the $111.2 million Eli Lilly made from Cyramza last quarter -- but it's hard to imagine that a $10 billion drug wouldn't bring in quite a bit for Dyax... and now Shire.

Taken together, it's compelling
I've previously argued that Dyax was too expensive -- and that was at about half the buyout price Shire offered. I was skeptical because Dyax was going to have to dilute to raise the money to market DX-2930, and because the drug was still years away from approval (Shire anticipates marketing the drug, if all goes well, in 2018). I also expected Shire to fight Dyax tooth and nail for market share. But with those companies combining, and with the upside and scale that Shire can bring to the arrangement in terms of sales and marketing, I think it's a compelling deal that was smart for Shire, and great for Dyax shareholders.