The high-performance Alfa Romeo Giulia Quadrifoglio is intended to be the first of a new line of Alfa sedans and SUVs. It was due in the U.S. by the end of the year, but it has been delayed. Image source: Fiat Chrysler Automobiles

But the 4C was never intended to be more than just a preview of where Alfa planned to go as a brand. Only a few hundred 4Cs have been sold in the U.S. The high-volume Alfas are yet to come: FCA is said to have invested 5 billion euros in a slew of new models, with big plans to boost the brand's annual global sales to 400,000 by 2018.

But now comes word that Alfa's relaunch has been delayed yet again.

"Re-examining" FCA's ambitious plans for Alfa Romeo
During FCA's third-quarter earnings call on Oct. 28, CEO Sergio Marchionne said that the global expansion of the Alfa Romeo brand was being "re-examined."

The reason he gave was the ongoing slowdown in luxury-car sales in China. FCA's plan to make Alfa a global luxury contender hinges heavily on China, he said. The company still plans to try to boost Alfa's sales to 400,000 a year by 2018, and it hasn't changed its product plans for Alfa, according to Marchionne.

But a large part of the sales volume that was expected for China will have to be generated elsewhere. Marchionne said that FCA will review Alfa's business plan over the next 30 to 60 days and possibly change the order in which new Alfas are launched, hoping to generate better sales in Europe and the U.S.

That makes some sense. Then came word last week that the first of the upcoming new Alfa Romeos have been delayed. According to an Automotive News report, the Alfa Romeo Giulia Quadrifoglio, a high-performance sedan that was expected to launch by the end of the year, will instead launch in Europe sometime in the middle of 2016. 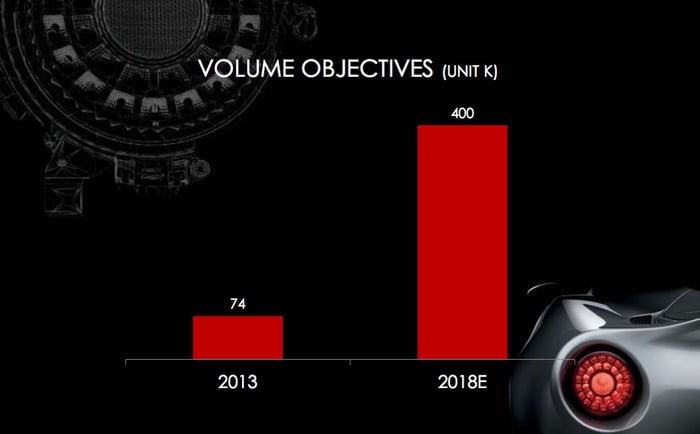 The Giulia Quadrifoglio is expected to introduce a complete line of compact luxury sedans under the Giulia name. A new Alfa SUV based on the same architecture was expected to follow it, arriving in Europe next summer. But that SUV has also been delayed, Automotive News said, and won't debut before the first quarter of 2017 at the earliest.

The delays raise big questions about whether FCA will be able to come anywhere near its 2018 sales target for Alfa. That's a problem, just one of several with FCA's hoped-for move into the luxury-car business.

Maserati hasn't sustained early success
As Marchionne explained when he presented FCA's five-year plan in May of 2014, FCA's Alfa Romeo and Maserati brands would together offer a full line of luxury sedans, sports cars, and SUVs. The plan was to make the two into an Italian rival to the German luxury brands -- and not incidentally, to deliver luxury-car profit margins to help boost FCA's overall profitability. It's the same thinking that has led General Motors (NYSE:GM) to approve a huge investment in its Cadillac brand: Luxury cars deliver fatter profit margins than mainstream models.

Worldwide, Maserati's deliveries dropped 22% in the third quarter compared with a year ago, and its operating profit fell 87% to just 12 million euros. Sales were off 24% in China, giving some weight to Marchionne's concerns for Alfa. But sales were off an even bigger 41% in North America, Maserati's largest market, and that has to be a concern.

Sales of the Maserati Ghibli were very strong after its introduction early last year, but they have since slumped. Image source: Fiat Chrysler Automobiles

Bloomberg reported last week that Maserati's main factory, in Grugliasco, Italy, will halt production for six weeks over the next two months. That follows a less dramatic cut in the factory's production rate back in September.

The problem? The Ghibli is a handsome car, but it just doesn't compete all that well with the likes of BMW and Mercedes in objective head-to-head testing. Maserati has some niche appeal to enthusiasts -- that's probably what drove the initial sales boom -- but it hasn't been able to build on that.

Maserati's sales decline doesn't bode well for the Alfa Romeo sedans that will follow it, and Marchionne surely knows that.

The delay might turn out to be a good thing.
Given the criticisms of the Ghibli, it's a good bet that the new Giulia and SUV were delayed in order to give them more polish. Or put another way, to improve them in ways that would give them a better chance of sustaining decent sales against tough German competition. If so, that's probably a good thing, one that could help Alfa avoid the quick drop-off in sales we've seen at Maserati.

For investors, the delay is sobering news. The luxury push is one of the key parts of the five-year plan intended to give FCA a big profitability boost by 2018. With over three years still to go, it's looking likely that this part of the plan will fall well short of Marchionne's ambitious goals.