Please ensure Javascript is enabled for purposes of website accessibility
Log In Help Join The Motley Fool
Free Article Join Over 1 Million Premium Members And Get More In-Depth Stock Guidance and Research
By George Budwell - Nov 10, 2015 at 11:19AM 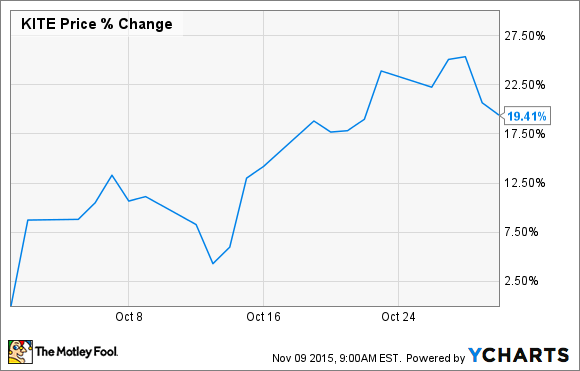 What: Shares of Kite Pharma (NASDAQ: KITE), a clinical-stage immunotherapy company, rose by nearly 20% last month, according to data provided by S&P Capital IQ. The biotech's stock took flight after an article appeared in the Los Angeles Times, about halfway through the month, highlighting the significant progress the company has made with its experimental treatment for non-Hodgkin lymphoma (NHL), known as KTE-C19.

KTE-C19 is made by first extracting T cells from a patient's own body and then genetically modifying them to express a chimeric antigen receptor for the CD19 antigen, a protein commonly found on the cell surface of B-cell lymphomas and leukemias. These modified T cells are subsequently reintroduced back into the patient, where they target cancer cells that express this particular protein.

So what: Although we've only gotten a preview of some of the early-stage data for KTE-C19, the results thus far are extremely promising. Earlier this year, the company reported that several patients that failed other therapies exhibited complete responses, meaning a total elimination of all signs of cancer, after receiving KTE-C19.

Now what: Kite is set to unveil the remaining early-stage results for KTE-C19 at the annual American Society of Hematology meeting in Florida this coming December. The good news is that there shouldn't be any major surprises to the downside, given that the company has already launched the mid-stage portion of this trial.

Having said that, investors may want to think twice before jumping into this red-hot immunotherapy company at this point. Kite is, after all, locked into a heated race with Juno Therapeutics (JUNO) to bring one of these novel cell therapies to market for NHL.

Juno presently has multiple therapies in development for NHL, but its most advanced candidate, JCAR017, is slightly behind Kite's KTE-C19 in terms of its developmental stage. So, Kite looks like it could be the first to market sometime in 2017 -- if things go according to plan. But it may not have the market all to itself for very long, and there's no telling which company will ultimately become the market-share leader. Complicating matters further, there are a whole host of other companies developing highly similar therapies, implying that competition in this area is going to be fierce.