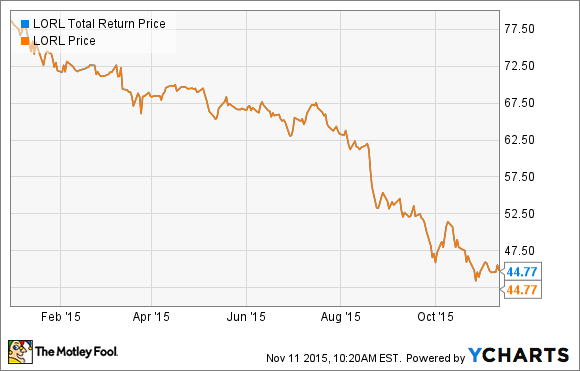 All year long, Loral has gone nowhere but down. Don't expect that to change. LORL Total Return Price data by YCharts.

For space investors, Loral Space & Communications (NASDAQ:LORL) poses a bit of a conundrum. On the one hand, Loral's not the easiest company to keep track of. The company doesn't issue regular press releases through the "newswires" for republication on Yahoo! Finance. And when an earnings report comes out, it can be difficult to locate it even on the company's own website (which instead redirects shareholders to Loral's SEC filings).

On the other hand, at $1.4 billion in market capitalization, Loral isn't such a small company that investors can ignore it entirely. It also owns 62.8% of Telesat, one of the world's largest satellite communications providers. So while Loral may not be in quite the same league as space giants like United Launch Alliance, it's not a small fry, either, by any means.

Loral filed its most recent 10-Q report with the SEC on Monday, and the stock is up 4.1% since. Lacking an accompanying press release to give "color" to the report, we'll be focusing almost entirely on the numbers today. Here's how they look:

Turning to Loral's cash flow statement, the situation looks a little less dire -- but still far from good. According to data from S&P Capital IQ, Loral has been running operating and free cash flow deficits (albeit, declining in size) for the past four years. Year to date, Loral has generated negative operating cash flow of $25.4 million. Minimal capital expenditures bring the free cash flow total to negative $25.5 million.

The upshot for investors
Lacking color to the news to explain why it might not be as bad as it appears, a conservative investor can only assume that it is as bad as it appears. This company isn't just reporting GAAP losses due to currency exchange rate headwinds (which are variable, and could reverse at any time). It's also burning real, tangible cash -- and has been doing so for four years straight.

Long story short, I'd rather be short this stock than long.