SpaceX Starlink wants to bring broadband satellite internet to the world -- and it's a popular idea. In addition to legacy satellite internet providers like Viasat and Hughes, both of which operate large "GEO" satellites at altitudes 22,000 miles and more above Earth, companies like OneWeb and Amazon.com's (AMZN -2.78%) Project Kuiper have announced plans to imitate SpaceX by launching internet satellites into Low Earth Orbit.

And now you can add another satellite internet provider to the list: Telesat. 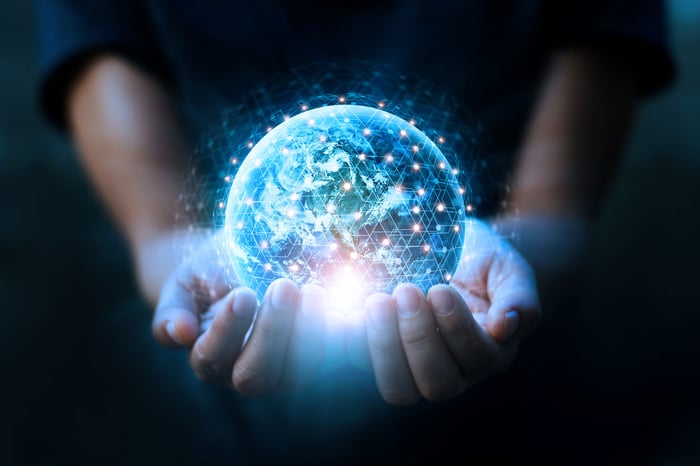 Internet for Canada, from space

Last week, Canada's Telesat, majority-owned by Loral Space & Communications (LORL), announced that it had hired French satellite builder Thales Alenia Space to build it a $5 billion constellation comprising 298 next-generation broadband satellites dubbed "Lightspeed." ($3 billion of the cost will go to building the satellites, and $2 billion to launching them and building a ground-based infrastructure to communicate with them, says CNBC.)

Unlike SpaceX's Starlink, which has gotten attention as a means to deliver fast internet to far-flung, rural internet consumers, Telesat targets the enterprise market, providing internet service to airplanes in flight, ships at sea, businesses, and rural municipalities. It will continue to do so with Lightspeed, with CEO Dan Goldberg telling CNBC that Lightspeed will serve "the same old customers and same old markets, [just] with an architecture that is better and more disruptive."

Also in contrast to Starlink, which orbits its satellites about 550 km above the Earth's surface, Lightspeed will orbit its satellites twice as high (1000 km). Technically, that's still "Low Earth Orbit," but the higher altitude will permit each satellite to cover much more ground surface. Thus, Telesat's network will require fewer satellites to operate.

Lightspeed will necessarily suffer from greater latency (the lag time between call and response) than Starlink enjoys because of the greater distances involved. But the company notes that Lightspeed will have less latency than customers are used to when communicating via satellites in geostationary (GEO) and medium Earth orbits.

Telesat expects to begin launching Lightspeed satellites in 2023, utilizing launch providers including Blue Origin and its still-in-development New Glenn rocket to get them into orbit.

Telesat has been laying the groundwork for Lightspeed for at least the last few months. In early November, Telesat signed a memorandum of understanding with the Canadian government whereby the latter would subsidize Telesat efforts to provide "broadband connectivity to rural, Northern and Indigenous communities across Canada" to the tune of C$600 million over the 10-year period after Lightspeed becomes operational. Under this agreement, Telesat will be aiming to provide internet download speeds of at least 50 Mb/s (i.e. about half as fast as SpaceX's Starlink system, which gets no Canadian subsidies).

Two weeks later, Telesat announced plans to list its shares on the Nasdaq. In a curious transaction -- essentially a reverse merger -- Telesat will switch roles with its present majority shareholder, Loral. "Telesat Corporation" will become the parent company, and Loral and "Telesat Canada" will be subsidiaries of the new parent company. Telesat Corporation will get the Nasdaq listing, and Loral will no longer be publicly traded. (This transaction is expected to close in Q2 or Q3 2021.)

As the company explained, one key objective of this restructuring will be "to support [Telesat Corporation's] compelling growth initiatives, including its revolutionary, highly advanced low Earth orbit (LEO) satellite constellation."

But how well will Telesat's Lightspeed be able to compete with its new and established satellite communications rivals? Operating in LEO rather than GEO orbit, Lightspeed should be able to offer better latency rates than rivals Hughes and Viasat. Lightspeed's most direct rival, one imagines, will be Iridium Communications (IRDM 1.39%) and its "NEXT" satellite constellation, which orbits at about 780 km altitude.

Conversely, Telesat expressly states that it is not aiming to compete with Starlink, or with Amazon.com's Project Kuiper, either. That's probably a smart move, because Telesat will be depending on Blue Origin -- owned by Amazon founder Jeff Bezos -- to put its first Lightspeed satellites in orbit! (It's rarely a great idea to depend on a rival to help get your own business off the ground.)

Regarding competition from SpaceX and Starlink, though, I'm less sanguine. On the one hand, Lightspeed's plan to offer "multiple Gbps of capacity" suggests its focus really is on corporate customers, with rural consumers a secondary concern. At the same time, SpaceX has recently said it plans to increase Starlink's download speeds from 100 megabits per second to as much as 10 gigabits per second. That tells me that Starlink may be planning to compete with Lightspeed farther down the road -- whether Lightspeed likes it or not.

Loral Space & Communications Is a Slow-Motion Train Wreck in Space