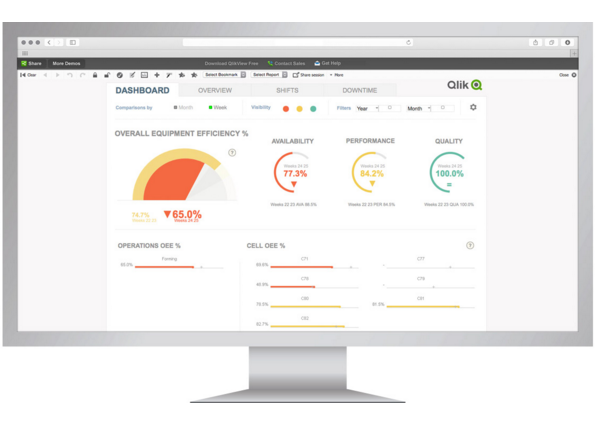 What: Shares of Qlik Technologies, (NASDAQ:QLIK) fell 13.9% during October, according to S&P Capital I.Q.  data.

So what: Qlik's stock fell just over 11% on Oct. 23, the day after the company released third-quarter 2015 earnings. Qlik reported a revenue increase of 8%, which represented a more moderate pace sequentially against second quarter growth of 11%.

While it's easy to argue that the full-year revisions simply tightened up in accuracy as management gained a clearer picture of the fourth quarter, shareholders nonetheless interpreted the above as lowered guidance, which technically, it is. And as is often habitual with shareholders when estimates get revised, the "QLIK" ticker sold off.

Now what: After enjoying an appreciable gain through the first nine months of the year, Qlik's stock has reversed course. Below we can see Qlik's performance year to date through the end of September, with competitor Tableau Software (NYSE:DATA) thrown in for some perspective: 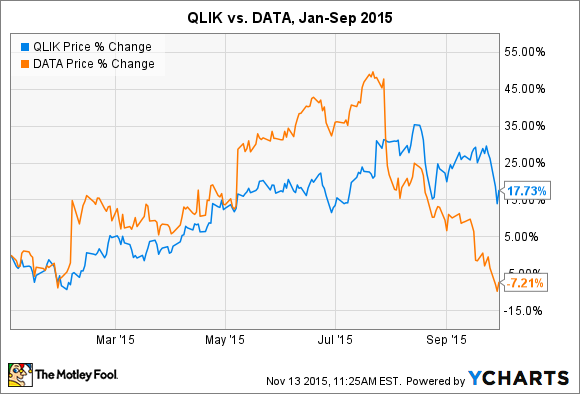 Now, we'll look at how quickly nine months of stock gain can get upended. Below are the same two companies, Oct. 1 to date: 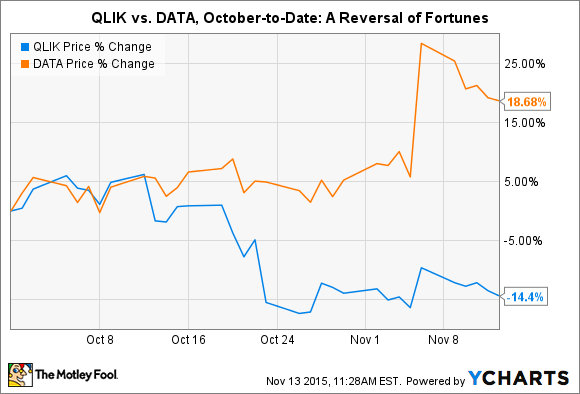 The difference between these diverging fortunes arose on Nov. 5, when Tableau announced Q3 2015 earnings that significantly exceeded market expectations. Tableau reported revenue growth of 67% versus the prior year, which was charged by a 75% international sales increase.

The two data analytics providers are of roughly similar size; through the first nine months of the year, Qlik has recorded $407.2 million in revenue, and Tableau has booked $450.8 million. So the two often get compared to each other. The notion that Tableau may be pulling ahead in the ability to scale revenue is likely contributing to some of the post-October pessimism in Qlik's stock.

However, these are but short-term considerations. Qlik will finish out a successful year in a few weeks, and the business remains sound. Despite continuing GAAP losses that are not uncommon for a small software company, Qlik maintains a strong balance sheet and positive operating cash flow generation -- the company produced $56.1 million in operating cash flow through the first three quarters of 2015. At the end of the day, investors have a succinct message for management as evidenced by the stock's recent weakness: More revenue growth, please.