Steve Symington, Jason Hall, and Brian Feroldi
(XMFSymington)
Author Bio
As a technology and consumer goods specialist for the Fool, Steve looks for responsible businesses that positively shape our lives. Then he invests accordingly. Enjoy his work? Connect with him on Twitter & Facebook so you don't miss a thing.

It seems obvious to say the key to beating the market is finding great stocks to buy and hold over the long term. But equally important to achieving that goal -- and arguably just as difficult -- is knowing which stocks to avoid along the way.

We asked three of our contributors to pick one stock they would avoid at all costs. Here's why they chose mobile games specialist Zynga (NASDAQ:ZNGA), coal giant Cliffs Natural Resources (NYSE:CLF), and clinical stage biotech Northwest Biotherapeutics (OTC:NWBO).

Steve Symington (Zynga): I've never disguised my distaste for the typically poor financial performance of content providers for free-to-play games. After all, game makers in the space typically must churn out one hit after the other to sustain early rates of torrid growth -- an exceedingly difficult task given a relative lack of loyalty and attention granted to them by their target gaming audience. But if I had to pick one company to avoid at all costs, it would be Zynga (NASDAQ:ZNGA).

Perhaps best known for its FarmVille and Words With Friends titles, Zynga stock has plunged more than 70% since its IPO in late 2011, hurt by a combination of an executive and engineering talent exodus, copycat games, its unsuccessful acquisition of OMGPOP, and a revised contract with Facebook -- which formerly comprised more than 90% of Zynga's revenue -- in 2012.

This past April, however, Zynga's much-maligned co-founder Mark Pincus returned as the company's CEO after Don Mattrick -- who was hired as Pincus' replacement in 2013 -- stepped down from the post. Pincus has revealed plans to revitalize the company, including refocusing on the opportunity in "busy mass-market adults," placing a greater emphasis on data analytics to drive design decisions, and strive to creatively innovate new categories of games.

Also to its credit, Zynga's most recent quarter was punctuated by net income of roughly $3 million, or breakeven on a per-share basis, and 10.8% growth in revenue to $195.7 million. And though bookings were roughly flat from the same year-ago period at $176 million, that exceeded Zynga's own expectations.

At the same time, however, the size of Zynga's player base continued to decline. Average daily active users fell 21% year over year to 19 million, while monthly active users dropped 27% year over year to 75 million. In conjunction with the report, Zynga also announced the immediate resignation of CFO David Lee without providing a reason for his departure. As it stands, it remains unclear whether Zynga's next round of game releases will be able to stem this decline. And until Zynga shows proof its efforts will bear fruit on this crucial measure of success, I have no problem continuing to avoid the stock.

Jason Hall (Cliffs Natural Resources): As things currently stand, Cliffs Natural Resources Inc is a stock I would avoid. Coal demand continues to decline, and this has sent prices plummeting, exposing coal producers to serious losses and huge uncertainty looking forward. Cliffs wants to exit the coal business, but bankruptcies in the industry -- with more likely on the way -- will make that a hard proposition and won't generate nearly as much cash as the company could have gotten even a year ago.
Then we look at the iron business. It's not as ugly as coal, but there's a big difference between "good" and "less awful." Unfortunately for Cliffs, the iron ore business falls in the second category.
That leaves Cliffs in a precarious position. Demand for coal is down and it's going to stay that way, and the company's plans to exit that business don't look like they will be worth much in value. An oversupplied global iron business should eventually rebound, but there's just too much uncertainty as to when that happens. And considering that it could take years, Cliffs is very exposed.
We may look back in a few years and see that this was a great time to buy, but frankly there's way too much uncertainty, and Cliffs' success is largely tied to things management has absolutely no control over. That, in a nutshell, is why Cliffs Natural Resources is a stock to avoid right now.
Brian Feroldi (Northwest Biotherapeutics): The hit-or-miss nature that comes with investing in small-cap biotechs makes the sector a tough place to make a buck. For that reason, I think it's wise to be extremely picky about the stocks that you choose to invest in, and you should demand a good track record and a strong balance sheet before you consider making an investment.
One company that whiff's on both of those metrics is Northwest Biotherapeutics, a small-cap clinical biotech company with a focus on immuno-oncology. This once high-flying stock has been tapping its long-term investors for cash for years, which has blown-up its share count and an insanely high rate. At the same time, anyone who put money down to fund its operations is now staring at huge losses, with early investors who  got in at the IPO down a jaw-dropping 99%. 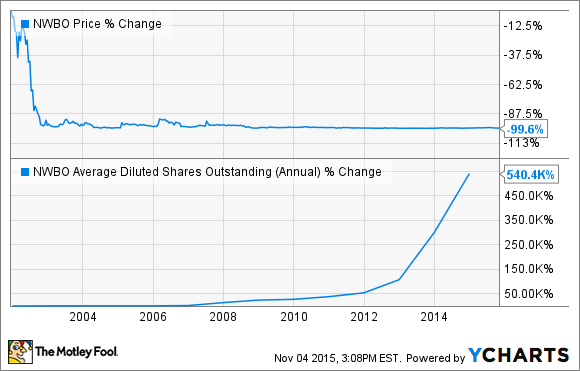 The company's shares were slammed earlier this year when news broke that a phase 3 clinical evaluating DCVas-L as a treatment for Glioblastoma multiform, a lethal brain cancer, was listed as "temporarily halted." The company later confirmed that only the screening of patients had been halted, not the trial itself, but that mixup doesn't exactly scream confidence for a company with such a poor long-term track record.

In addition, the company isn't exactly on sound financial footing, as it only had $19 million in cash on its balance sheet as of June 30, despite the fact that it lost more than than $38 million last quarter from operations alone. While the company did just raise an additional $30 million in October to keep the doors open, I doubt that will be anywhere near enough to sustain the company for long given the huge expenses of running its late-stage clinical trials. This makes it all the more likely that the company will once again be looking to tap the markets to keep it alive.

I'll fully admit (and hope!) that everything could work out find for DCVax-L, but given the long-term track record of this stock and its less than ideal financial situation, this is one stock that I'm content to keep far away from.