Our analysts discuss some wind and solar investments that should be in your portfolio.

Alternative energy is by far the fastest growing segment of the energy industry today. Wind and solar alone account for over half of the new electricity capacity installed in the U.S. today, and they're growing domestically and around the world.

But alternative energy investments haven't been particularly kind to investors over the past decade, so where should we be looking for opportunities? Three of our energy contributors take a look.

Travis Hoium: Enough solar energy hits the earth every hour to replace all other energy sources used in a year combined. If we could capture 0.011% of the solar energy that hits the world every day it could literally power every car and electrical device currently in existence.

The challenge for investors in solar has always been making money on this massive potential. The average person can probably name a solar company that has gone bankrupt before they can name one that's been a winner for investors.

But that's changing. The solar industry is just ending what's known as the nascent or growth phase of a business cycle and entering a more mature growth phase of consolidation. This doesn't necessarily mean that companies will consolidate, but rather that the power in the industry will consolidate around a handful of power players. While the nascent phase was messy, with lots of bankruptcies and technology failures -- just as we saw with computers in the 1980s or the Internet in the 2000s -- the consolidation phase will bring slower growth along with more stability to those who beat out competitors.

Two companies to watch are First Solar (NASDAQ: FSLR) and SunPower (NASDAQ: SPWR), which are both survivors of the last decade of chaos and technology leaders with the kind of vertically integrated model that's winning in solar today. Neither company will be a high growth stock that makes headlines week after week, but they should slowly generate value while riskier companies shoot up and crash down on the stock market.

Long-term, solar energy will be the revolution that changes energy as we know it. It's available everywhere, it puts power in the hands of consumers, and it's cheap enough today to beat fossil fuels at their own game. That's why it's my bet for the best opportunity in energy.

Jason Hall: One alternative energy investment that people often overlook is wind. And for good reason, since huge conglomerates like General Electric and Siemens dominate the manufacturing side of the industry and no real "pure-play" utility investments are based on wind energy.

However, wind turbine maker Vestas Wind Systems (NASDAQOTH: VWDRY) is a great company and a sound investment. And while the Danish company struggled mightily through a recent low point in the demand cycle for wind turbines, things have turned around: 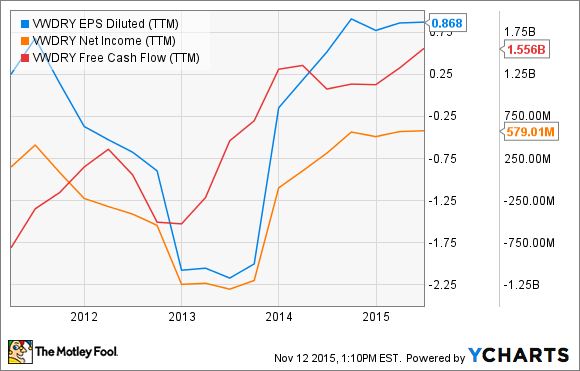 And it's not just a resurgence in demand that's lifted the company's results. The current management team has been running the show for about two years, and has significantly improved the company's capital and operating structure. Operating expenses have come down sharply since their peak in 2012, even as the company continues to invest heavily in research and development: 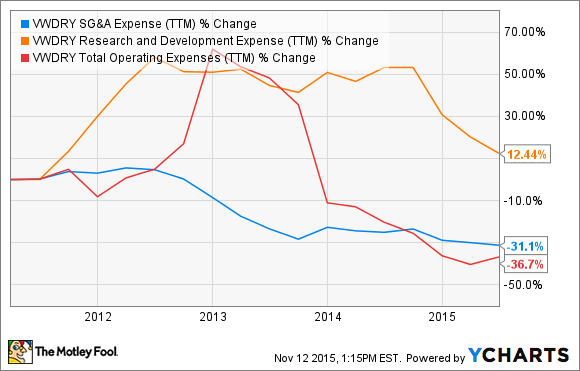 In summary, demand is growing, and this pure-play expert in wind turbine technology is running a better, more cost-effective business than it ever has under a strong leadership team. Vestas is worth a close look for long-term investors interested in best-of-breed alternative energy companies.

8point3 Energy Partners is a recently IPOed yieldco sponsored by First Solar and SunPower, two of the largest and most consistently profitable vertically integrated solar companies in the world.

8point3 Energy's business model is simple yet effective. First Solar and SunPower design, build, and drop down solar projects, each secured by a long-term, fixed-price power contract, usually with an investment grade utility. The yieldco then collects recurring and predictable cash flow for decades, and pays them out as distributions to investors.

First Solar's and SunPower's total pipeline spans an impressive 13.7 GW of solar projects across over 25 countries on six continents. This creates the potential for not just incredible diversification for investors, but decades of exceptionally strong and consistent distribution growth.

Brookfield Renewable Energy Partners meanwhile represents what is, in my opinion, the absolute best way to invest in hydroelectric power and wind. It owns 7.4 GW of hydroelectric and wind power generating capacity across seven countries in North America, Europe, and Latin America.

92% of its cash flows are secured by long-term, fixed-fee, inflation adjusted contracts with an average remaining life of 17 years. When combined with Brookfield Renewable Energy Partners' current yield of 6.5% management believes investors can expect long-term total returns of 12% to 15% annually.