Matthew DiLallo, Rich Smith, and Adam Galas
(TMFmd19)
Author Bio
Matthew is a senior energy and materials specialist with The Motley Fool. He graduated from Liberty University with a degree in Biblical Studies and a Masters of Business Administration. You can follow him on Twitter for the latest news and analysis of the energy and materials industries: Follow @matthewdilallo

At the moment, the world is vastly oversupplied with oil. Producers are pumping out upwards of 2 million barrels per day more than current demand. Having said that, demand is only expected to increase in the years ahead, with emerging market economies in particular expecting to have an even more voracious appetite for oil. That's why oil and gas companies continue to hunt for more oil while increasing their focus on frontier areas not currently known to be rich in oil and gas. Those quests have turned out to be rather fruitful, with a number of notable, yet relatively unnoticed discoveries being made over the past year.

Matt DiLallo: Senegal isn't known to be an oil and gas hotbed -- yet. But that could change thanks to ConocoPhillips (NYSE:COP), which made two discoveries in the deepwaters offshore Sengal late last year. The map on the slide below notes the locations of these two discovery wells. 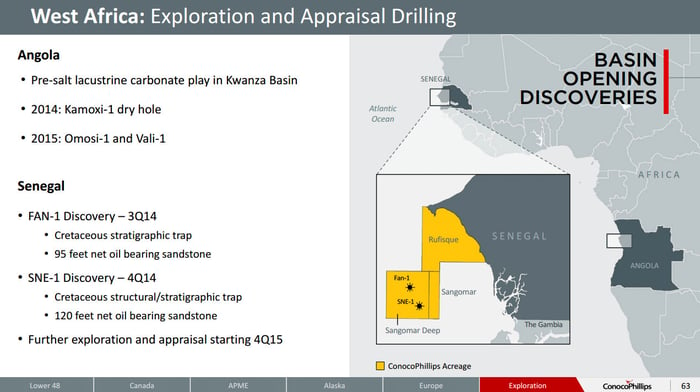 At this point, ConocoPhillips isn't yet sure how much, if any, commercially recoverable oil has been discovered. It's only just starting further exploration and appraisal drilling this quarter. However, Larry Archibald, SVP of Exploration did note that, "The preliminary results at FAN-1 are encouraging," and that the company "believe[s] the positive result reinforces our global exploration strategy of getting into the right plays early in their life-cycle." He also said the company is "encouraged by the presence of a working petroleum system in this frontier basin and are now evaluating further work to enhance our understanding of the two plays."

The company should have more information about these two discoveries at some point early next year. If the appraisal drilling does indeed confirm a commercially viable discovery, it could give ConocoPhillips a new source of future growth. Having said that, ConocoPhillips is looking to get out of the deepwater exploration business, suggesting these and future oil discoveries in Senegal might not be developed until a deep-pocketed buyer is found.

Rich Smith: Another big hydrocarbon discovery you may not have heard of comes with serious geopolitical ramifications.

Just this past August, Italian oil giant Eni (NYSE:E) discovered what it calls a "super giant" natural gas field just off of Egypt's Mediterranean coast. This field, which Eni calls the "Zohr Prospect," is believed to contain as much as "30 trillion cubic feet of natural gas, equivalent to 5.5 billion barrels of oil," making it "the largest [gas field] ever found in the Mediterranean Sea."

30 trillion cubic feet is more than twice Eni's current proven gas reserves, according to data reported by S&P Capital IQ. And while the gas lies entirely within Egypt's exclusive economic zone, and thus belongs to the country, Eni holds the concession to extract the gas. At current world gas prices of roughly $2.30 per 1,000 cubic feet of natural gas, Zohr's contents could be worth as much as $69 billion.

This is obviously great news for Eni. It's also great news for Egypt, as Eni says the amount of gas it's found under the Mediterranean waves will be enough to "ensure satisfying Egypt's natural gas demand for decades." Incidentally, the financial wealth generated by the gas field will also help to underwrite a significant expansion in Egypt's military forces, including the recently announced purchase of two French-built aircraft carriers by Egypt.

So in addition to helping slake the world's thirst for energy, this find could alter the balance of power in the Middle East for decades to come.

Adam Galas: Despite the worst oil crash in a generation, oil and gas exploration still continues. Take for example Chevron's (NYSE:CVX) late April find of a 415-foot layer of natural gas via its Isosceles-1 wildcat drilling efforts off the western coast of Australia.

The find is part of the larger $54 billion Gorgon-Jansz LNG project that is a joint venture between Chevron, Royal Dutch Shell (NYSE:RDS.A), and ExxonMobil (NYSE:XOM). This enormous undertaking will eventually produce 15.6 million tons of LNG for export beginning at the end of 2015.

LNG represents a major market opportunity for oil companies because China, despite its recent slowdown, plans to replace a lot of coal- and oil-fired power plants with gas-fueled ones in the coming decades.

In fact, by 2020, Beijing hopes to triple the use of gas by 2020. By 2040, the IEA estimates that Chinese LNG imports will rise 443% and provide a fifth of China's annual gas supply. Much of this gas will come from Australia, which is set to become the world's largest LNG exporter by 2018 thanks to projects like the Gorgon-Jansz.

This is why Chevron, Royal Dutch Shell, and ExxonMobil are still willing to invest tens of billions of rapidly dwindling capital expenditure dollars in this area and gain a strong foothold in what could prove to be one of the largest and most lucrative energy regions of the coming decades.