Investors seem to loathe these three businesses. But should you, too?

Everybody loves a market darling -- stocks so adored that their underlying businesses can seem to do no wrong in the eyes of investors. But arguably just as prominent in our skeptical world are stocks the market loves to hate. Sometimes, that hatred stems from perfectly valid sources, ranging from industry slowdowns to shifting consumer preferences, failed products, bad PR, and management missteps.

We asked our contributors to find three such stocks. Here's why they believe Whole Foods Market (WFM), United States Steel Corporation (X 0.25%), and Insys Therapeutics (INSY) each fit the bill, and perhaps more importantly, what they think of these three stocks today:

Steve Symington (Whole Foods Market): It seems an understatement to say it's been a wild past couple of years for Whole Foods Market shareholders. First, the organic grocery chain jumped nearly 60% in the four months between October 2014 and February 2015, when it hit a fresh 52-week high of $57.57 per share. But the value of Whole Foods stock has been cut in half since then, and has badly underperformed the broader market so far in 2015: 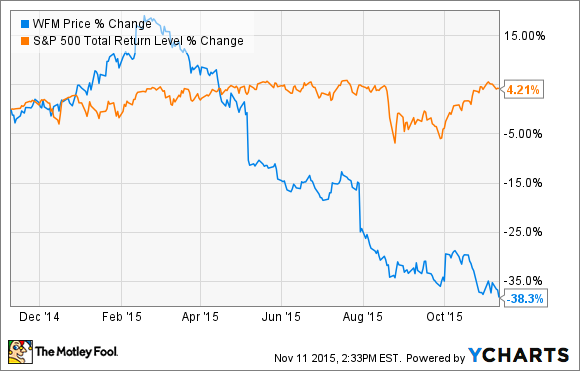 In large part, Whole Foods' decline can be blamed on rising competition from traditional grocers, which have increasingly embraced a larger selection of their own value-priced organic foods in response to consumers' changing preferences. Of course, it also didn't help a few months ago when inspectors in New York accused the company of overcharging consumers by using inaccurate product weights, calling it the "worst case of mislabeling they have seen in their careers." Whole Foods management, for their part, insisted the wrongly labeled products were inadvertent and unintentional, but the damage had already been done.

In Whole Foods' most-recent quarter, sales rose a modest 6% year over year, to $3.44 billion, but also translated to a 56% decline in net income, to $56 million. That bottom line included a non-cash asset impairment charge of $46 million, and a restructuring charge of $34 million. Even excluding those charges, however, earnings would have declined more than 14% from the same year-ago period.

To Whole Foods' credit, the chain is moving quickly with strategic initiatives to address its challenges, including the launch of smaller-format, value-oriented "365" concept stores, and promotions intended to revitalize customers' interest and excitement for the brand. And along with its quarterly report last week, Whole Foods raised its dividend, approved a massive new $1 billion share repurchase program, and unveiled an ambitious new capital structure designed to take advantage of attractive debt markets and reduce the company's overall cost of capital.

If Whole Foods can win back the hearts of consumers and prove to investors it has what it takes to return to sustainable top- and bottom-line growth, its share price should follow suit. But in the meantime, Whole Foods remains a stock the market loves to hate. 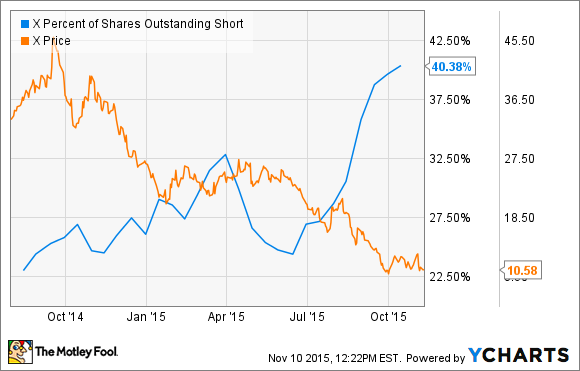 Why the hate? In short, the global steel market is a complete and total mess right now. China's economic slowdown is having major ripple effects, and some major steel-producing countries in Asia have responded by propping up their own domestic steelmaking industries.

This is affecting American steelmakers like U.S. Steel because they are dumping huge quantities of cheap, government-subsidized steel onto the U.S. market. The U.S. government has implemented tariffs, but so far it hasn't slowed the level of imports. According to a number of industry estimates, imports increased since the tariffs were implemented in 2014.

What does this mean for U.S. Steel? In short, the company is getting squeezed hard.

U.S. Steel reported earnings recently -- another net loss, with weak demand hurting its utilization rates, and low pricing putting a pinch on cash flows. Looking forward, things aren't really on track to get better in the near future.

The bottom line? There's way too much steel manufacturing capacity in the world right now, and U.S. Steel isn't built to compete in this environment.

In addition to having the stigma of being called a "marijuana stock," Insys has brought a lot of negative publicity on itself over its marketing practices for Subsys, its under-the-tongue spray that's used to treat cancer pain. The company has been accused of promoting its drug for off-label purposes, and giving providers improper incentives in an effort to increase their use of the drug. Earlier this year, the company reached a settlement with the Oregon Department of Justice that cost it $1.1 million, and it looked like that issue was behind it.

However, news recently broke that the company is currently being investigated by at least six other states, and the company's CEO recently resigned. It now appears that this story is far from over.

On the financial front, Insys continues to look like an all-star, as sales in its most-recent quarter grew 56%, and its earnings jumped more than 100% from the year-ago period. However, the controversy around the company has caused its shares to trade erratically, as its stock has plunged more than 40% off its summertime high.

When you simply look at the numbers, there's a lot to like about Insys, as it's growing fast, it's highly profitable and debt-free, and has a pipeline full of opportunity that could make its current valuation look like a steal. In addition, its new management team announced a $50 million share-repurchase program that could add a lot of value for its shareholders if the company is cleared from any wrongdoing, or gets away with only paying small fines.

We won't know how this story will play out for some time, but regardless of whether Insys turns out to be a great investment or not, you can be sure that this is one name that the market is sure to hate.