Amara, a noted technology researcher, is best known for his eponymous law, a statement that I find rings true the longer I write about technology and the companies and stocks bringing innovation to market.

On reading about Alphabet's (NASDAQ:GOOG) (NASDAQ:GOOGL) decision to kill its Chrome desktop operating system late last month, I couldn't help being reminded of Amara's wise words. Because while Alphabet's move might seem small in isolation, it could hold major implications for the future balance of power in desktop computing, a dynamic that Apple (NASDAQ:AAPL) and Microsoft (NASDAQ:MSFT) investors will want to watch closely.

Although this news might sound small-scale at first glance, the news represents the culmination of two years of private engineering efforts on the part of Google's engineering teams. And more importantly, it sends a clear signal regarding Alphabet's long-term strategy in expanding Google's presence from a provider of some of the most indispensable products today -- search, maps, and so on -- into the dominant computing platform in the world, if it wasn't already.

The strategy appears to involve having Alphabet "back-door" or leverage its utter dominance of its Android mobile operating system as a channel to create an equally formidable presence in desktop computing. As emerging market smartphone growth has favored low-cost devices powered by Google's free Android OS, Alphabet's death grip on the market for smartphone software has only solidified in recent years.

However, owing to the outsized influence of Microsoft and, to a lesser extent, Apple, the Chrome OS has been stymied in its efforts to gain market share since its retail debut in 2011. According to research firm IDC, Chrome OS holds less than 3% of the total desktop market.

This fusing of operating systems will take some time, though. Alphabet has said Google will bring the first Android desktop computers to market in 2017, although demos should begin at some point next year. Either way, this news should pique the interest of Apple and Microsoft shareholders.

Bigger threat to Apple Or Microsoft?
Although Apple has some skin in the game here, this really represents a serious threat to Microsoft's slowly evolving computing strategy.

For Apple, watching Alphabet create a seamlessly integrated smartphone-to-desktop experience adds to its chief rival's value proposition in both consumer electronics markets. However, Apple's end-to-end hardware and software ecosystem should help inoculate it against Alphabet. In testament to the strength of its ecosystem, the success of the iPhone has helped make Mac sales the lone bright spot in an otherwise gloomy personal computer market in recent years. So again, while this move could crimp Mac sales, Microsoft investors would do well to recognize the move as a material threat to their investment.

Although it has made progress in recent years, Microsoft remains frustratingly dependent on both its Windows desktop OS and Office productivity software to drive the bulk of its financial performance. Though overtaken by cloud services as Microsoft's second-largest reporting segment last year, Windows software still accounted for 19% of Microsoft's 2014 revenue. 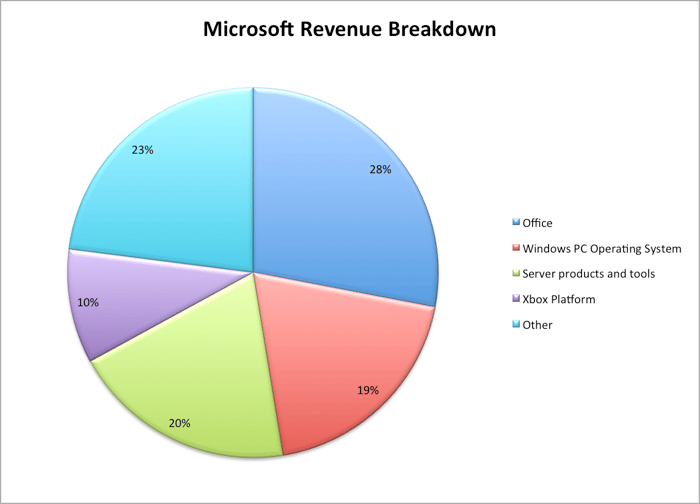 Server and cloud products can continue to take up some of the slack, but Microsoft has few answers about how it can continue to monetize its Windows software, especially if Alphabet mirrors its mobile strategy and charges nothing for Google's Android desktop OS.

Again, it isn't immediately clear to what degree this could happen, and it's worth noting that Microsoft isn't without ammunition of its own. Microsoft's biggest weapon is Windows, still a de facto productivity tool the world over. While many corporations remain wedded to Office, new alternatives such as Slack -- which I've said Microsoft should buy -- and Alphabet's suite of free Google Docs could eventually undo Microsoft's stranglehold on productivity software.

As Amara's opening quote implied, Alphabet's forthcoming flanking maneuver on Microsoft in desktop will play out gradually. It could also, at its most extreme, alter the balance of power in the last bastion of computing that Google doesn't dominate already. Microsoft investors, you have been warned.