General Electric (NYSE: GE) Chairman and CEO Jeff Immelt has a strong vision for the future of the company. Under his leadership, GE is already a leaner, nimbler version of its former self. But the results of his vision may not end up looking much like the GE of past years. Instead, it may resemble Honeywell (NYSE: HON).

But is that a good thing? In my view, it's a very good thing.

The more things change
The biggest change Immelt is implementing at GE is already under way: the divestiture of its non-industrial portfolio. This grouping includes its 80% stake in NBC Universal, its consumer appliances business, and the biggest portion: its financial division, formerly known as GE Capital.

Less than 10 years ago, these businesses accounted for more than half of GE's revenues. But according to Immelt:

This is a major step in our strategy to focus GE around its competitive advantages. GE today is a premier industrial and technology company, with businesses in essential infrastructure industries. These businesses are leaders in technology, the Industrial Internet, and advanced manufacturing. ... They will be paired with a smaller GE Capital, whose businesses are aligned with GE's industrial growth.

The GE he's envisioning sounds remarkably like Honeywell, a company that has an excellent track record of focusing on its industrial products to the exclusion of other areas such as finance and media.

GE's financial activities -- which accounted for 42% of the company's profits in 2007 -- had become increasingly divorced from the company's industrial activities with items such as offering private-label credit cards to retailers such as Amazon.com and Wal-Mart and investing in real estate. When the Great Recession hit, GE's core industrial businesses weathered the storm fairly well (energy sector profits actually increased), but GE Capital's profits sank from $12.3 billion in 2007 to just $2.4 billion in 2009. GE's net earnings were more than halved during that period, with the bulk of the drop attributable to GE Capital.

Honeywell, on the other hand, without a major finance arm, saw its profits fall only 12% between 2007 and 2009. Its stock price also weathered the recession much better than GE's: 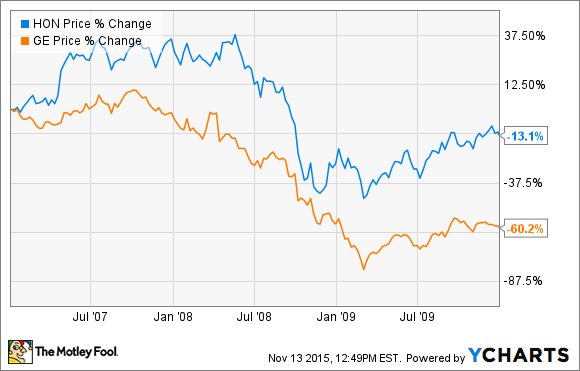 Also in Immelt's favor, the consumer appliances business is a competitive, low-margin industry that made up less than 2% of GE's total 2014 profits. And what does an industrial conglomerate know about running a media company like NBC Universal anyway? In my view, Immelt is right to refocus the company on its core industrial strengths.

This refocusing has already begun in earnest. GE completed the sale of its NBC Universal stake in 2013. Much of GE Capital, including its Real Estate and Healthcare Finance Services divisions, has been sold to various buyers, including Wells Fargo and Capital One. GE also spun off the Retail Finance arm of GE Capital into a new company, Synchrony Financial, in 2014. Now, GE is trying to sell its consumer appliances business to Sweden's Electrolux.

How they compare
Before the recession, GE's and Honeywell's business portfolios were quite different. The following charts show the percentage of business each company's product lines contributed in 2007:

The large orange wedge in the GE chart, representing Capital Finance, and the pale blue wedge, representing GE's 80% stake in NBC Universal, not only comprise nearly half of the company's 2007 revenue, but they also have no counterpart in Honeywell's chart.

Now let's look at how the companies might compare as a result of Immelt's moves. To make this projection, I've used FY2014 data from both companies, but I've removed the former GE Capital and consumer appliance businesses:

Once Immelt's vision is realized, the GE of tomorrow will resemble Honeywell more than it will the GE of 2007.

How they differ
Both companies are active in the aviation/aerospace and transportation fields. GE has made large investments in the fields of power and water, energy, and healthcare, while Honeywell is invested heavily in specialty materials like chemicals & chemical compounds and automation & controls.

Honeywell's industry profile has performed slightly better over the past five years. Its profits in the fields of Specialty Materials and Automation and Controls have increased by 33.7%. GE's profits in Power and Water, Energy, and Healthcare have increased by only 27.7% in the same time period. But remember, past performance doesn't necessarily guarantee future results.

When looking at dividends, on the other hand, the advantage is reversed. While both stocks pay one, GE's yield is currently a bit higher at 3%, compared to Honeywell's 2.4%.

The Foolish bottom line
Clearly, GE was overdue for a change. And given how well Honeywell has performed since the Great Recession, it's a good model for GE to follow. By refocusing on its core industrial businesses to the exclusion of all else, like Honeywell has, perhaps GE's stock performance will finally begin to emulate Honeywell's: 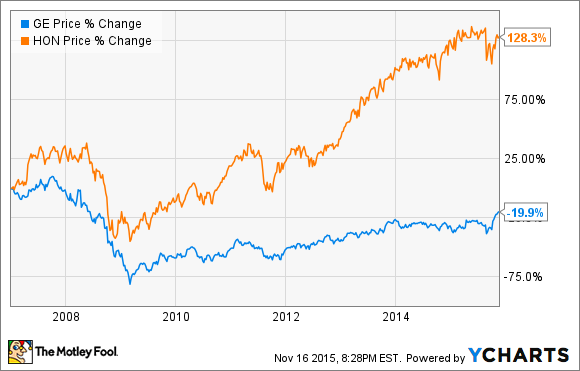 I think investors will find value in both in the coming years, but if I had to pick just one, I would go with GE. Immelt's bold vision has played out well so far, and I'm excited to see what else he has in store.