There are certain fallow periods when few companies raise their dividends. Last week was not one of them. A host of payout hikes walloped the market, making shareholders of certain stocks incrementally richer as we head into Santa season.

Among the raisers were several prominent stock market names. Three of the these rock stars are:

Intel
The PC business isn't what it once was, but there's still money to be made -- and distributed -- from it. Top chip maker Intel (NASDAQ:INTC) has enhanced its quarterly dividend, declaring an 8% improvement in the payout to $0.26 per share.

The company is optimistic these days, likely because two of its business lines are showing admirable growth. The first -- its data center group -- saw a 12% improvement in revenue (to over $4 billion) in the company's most recent quarter. Meanwhile, its Internet of Things segment improved by 10%, taking in $581 million.

However, those were bright spots in an otherwise forgettable quarter for Intel. True to recent form, the company posted declines in revenue (by a marginal amount to $14.5 billion), and bottom line (down 6% to $3.1 billion). 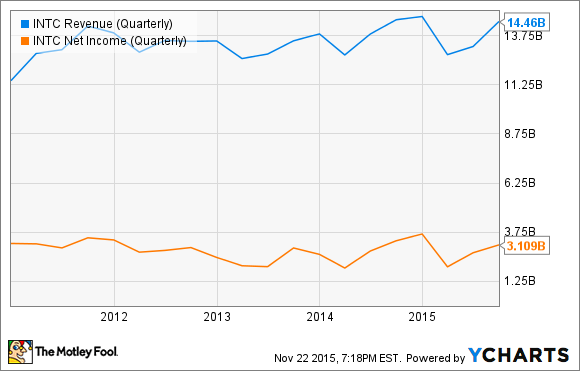 Intel's Achilles heel at the moment is that PC market, which was robust for many years before the world began to shift its computing to mobile devices. The company still makes far and away the bulk of its revenue from this business.

Given the encouraging growth rates in the data center group and IoT, I think Intel's growth will eventually rev up again. A company this size takes time to turn around; this stock is a long-term play.

But it's a good one. Intel's still very profitable, and it throws off lots of the nice green stuff. It has generally managed to keep its annual free cash flow steady at around $10 billion over the past few years, which is more than double what it has paid out in dividends. In my opinion, the company's new payout is therefore safe.

Intel has not yet declared the record or distribution dates for its upcoming dividend.

Keurig Green Mountain
How about a dividend raise to go with your home-brewed coffee? Keurig Green Mountain (NASDAQ:GMCR.DL) is serving up a 13% improvement in its yearly distribution, which will now amount to just under $0.33 per share for each quarterly payout.

The hike follows a better-than-expected fiscal fourth quarter, in which the company exceeded analysts' estimates for both the top and bottom lines. These were down significantly on a year-over-year basis, with the former declining 13% to just over $1 billion, and the latter down 15% to $131 million ($0.85 per share). Yet the beats gave investors hope, helping to lift the slumping stock. 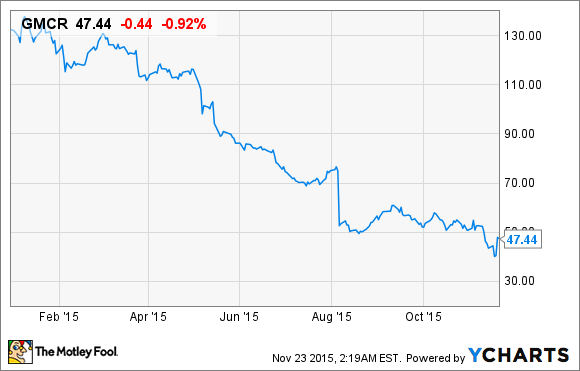 But one set of quarterly beats doesn't necessarily make for a compelling investment case. Those declines are worrisome, as is Keurig Green Mountain's uninspiring guidance for fiscal 2016 -- flat to low single-digit percentage growth in sales, and $3.25 to $3.45 in per-share profit (against a fiscal 2015 EPS of $3.56).

That said, the company's free cash flow cushion is big enough to easily cover the dividend, even after that 13% hike. If business continues to go south, though, so too will FCF -- on an annual basis, it's already dropped precipitously since 2013. So the new dividend is likely secure for now, but investors should keep a close watch on how those fundamentals develop.

Keurig Green Mountain's new dividend is to be paid on Feb. 16 to stockholders of record as of Jan. 15.

Nike
A sporting goods maker that will apparently never stop increasing its speed, Nike (NYSE:NKE) last week declared its habitual, once-a-year dividend raise. The distribution is to rise by 14% to $0.32 per share. 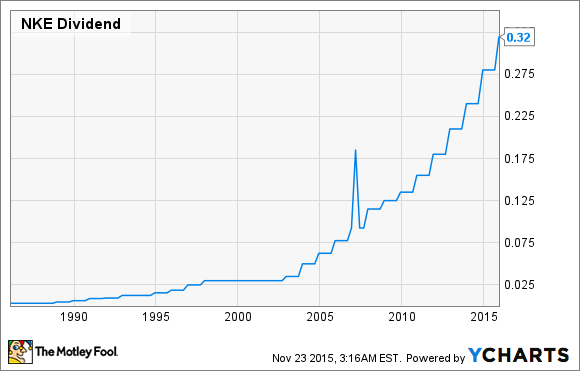 There was no reason in the world why Nike would have blown off this year's hike. The company's fiscal 2016 first quarter  was excellent; sales rose 5% on a year-over-year basis to $8.4 billion, despite a significantly stronger dollar that has battered the top line numbers of many U.S. multinationals.

Nike plows much of its profit back into its business, so even with the latest hike, its dividend doesn't yield much -- less than 1%, in fact. But that's also due to the fact that the stock is on a tear. It has been the best performer in the Dow Jones Industrial Average so far this year.

That skinny yield is a sign that the company spends relatively little on its dividend, and its cash flow statement bears this out. For 2015, free cash flow was more than four times the total dividend payout. So, worrying about the future of Nike's payout is like worrying if Lebron James will do well on the basketball court this year. In other words, it's solid.

Nike's new dividend will be handed out on Jan. 4 to shareholders of record as of Dec. 9. Note: The company will split its stock 2-for-1, effective Dec. 23. The $0.32 per share figure is the pre-split amount.